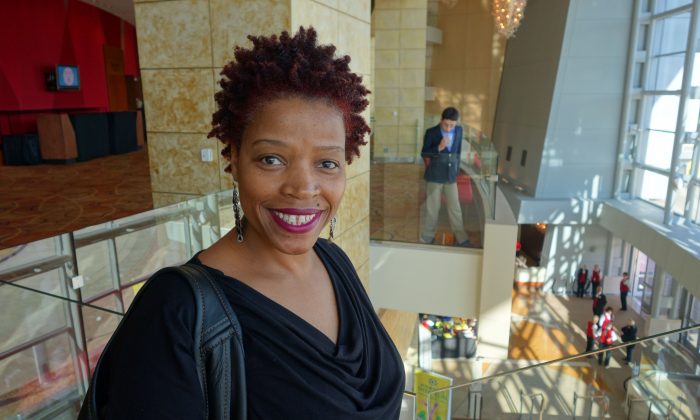 ATLANTA—One American lady came to Shen Yun Performing Arts in a spirit of generosity. Vendella de Moors brought her Chinese neighbor. Though they do not share a language, they are friends. She wanted her to enjoy Shen Yun’s classical Chinese dance. “I thought it was absolutely beautiful … I brought my neighbors with me. I bought each one of them a ticket, because I call her ‘Mama’—she’s from China.”

Both Mama and her daughter-in-law, who is a doctor, came to Shen Yun as Mrs. de Moors’ guests.

It made her neighbor happy, as she had hoped. Her expression told all. “So I was like, ‘Mama’s going to love this.’ So when I looked over and saw her face, she was so excited. I was like, ‘Yay!’ It’s a wonderful job.”

Shen Yun “draws inspiration from China’s 5,000 year-old civilization and the virtues it’s long embraced—compassion and loyalty, kindness and bravery. We believe this rich heritage is a precious gift worth keeping, and worth sharing with all of you,” states the Shen Yun website.

Mrs. de Moors was eager to share the precious gift with her friends.

“She doesn’t speak any English,” said Mrs. de Moors. “But for the last seven or eight years, we’ve been neighbors. Doesn’t speak a lick of English. And we communicate. So I wanted to invite her for the performance tonight, because I know it’s traditional Chinese. And she absolutely loved it. I almost cried, because I wanted her to enjoy it. And they had an interpreter in English and in Mandarin. So I was like, ‘Yes! Yes!'”

“We all call her ‘Mama,'” said Mrs. de Moors. “She’s not our Mama but she’s like a Mama to me. She always brings me flowers. She makes these cute little flowers out of wire, and it’s a nylon type of material with different colors in it. And they are just absolutely beautiful. She’s amazing. She’s amazing. We just see each other walking. Now we’ll walk together. She’s teaching me a little thing.” Mrs. de Moors said she has learned a couple of words of Chinese from her neighbor.

Mrs. de Moors works at Fayette CARE Clinic, south of Atlanta. It is a charity clinic founded in 2006. Its purpose is to fill a gap in the health system, by offering compassionate medical care to poor and uninsured people.

Her neighbors’ doctor daughter-in-law has helped at the Fayette CARE Clinic. “She did a great service for us,” said Mrs. de Moors. Her friendship with Mama and her gratitude to her daughter-in-law moved her to treat her neighbors to tickets. “So she did a service for us, and she’s such a sweetheart giving back to the community. I said, ‘I’ll invite them all.’ And they were so humble and gracious that they actually came with me.”