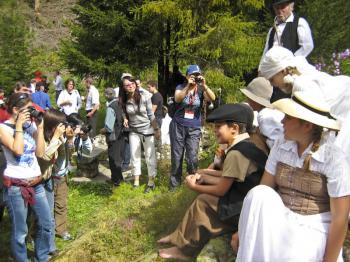 In Pursuit of the American Dream

"That`s amazing, oh my goodness—it`s real!” Shrill expressions of delight echoed repeatedly, in praise of Switzerland's majestic mountain terrain. More than 130 journalists from around the globe had come to this diminutive nation, at the invitation of the Office of Swiss Tourism, to marvel over the country's abundant natural and man-made attractions. At the historic 100-year-old Rhäti train station,  participants got a simulated glimpse of the day-to-day life of those who lived during the period of the founding of the railway. Rhati is one of the world's educational historic cultural sites.

As the special train arrives, the scene of the gathering takes on the appearance of a bustling anthill of activity. Cameras click continuously, frequently wielded by excited Asians and Americans, as well as journalists from India. It is almost as though all are involved in a friendly competition to record an aspect of uniquely Swiss culture. The unscripted scene at times, reminds one of a well-run zoo. All the actors are conscious of the parts they play, and the young Swiss organizers are equally mindful of their roles during the seven-day media extravaganza. Statements like, "I don't know, I have never been here before, I must ask my boss…" were noticeably absent. Many experienced journalists who had participated in countless other media events on different parts of the continent were totally in the moment, caught up in the spirit of exuberant spontaneity and cooperation. The scene’s synchronous unfolding and underlying message required no translation.

A Yearning for a World That Still Has Order, Tradition and Time-Honored Customs

This well-choreographed event touched the heartstrings of American journalists in particular, who openly pine for such a world as this, one that still maintains order and balance. The distant alpine wonderland of Switzerland, with its crystal-clear mountain lakes, amid primal natural beauty, is a world that seems so far removed from the rampaging world financial debacle. Here there is no sense of class distinction, with its concept of the haves and have-nots. The country is a world apart, in a different realm from contemporary, "throw away" society.

Zaina Fausto, head of Swiss Tourism in Los Angeles, confirms the trend toward those seeking their identity in Switzerland: "More and more Americans voice their desire to connect with the cities and towns of their heritage, to experience the traditional, historic roots of their identity, something that America, with her mere 200 year-old history of immigration, is unable to provide."

She refers in particular to those of Amish decent who reside in the U.S. This community of spiritual believers originated in Switzerland. Their belief system shuns all new technical inventions and modern contrivances. Others have access to their communities by invitation only. She continues, "We can gauge an interest from increased bookings apropos to Amish heritage, as well as by the popularity of tacky new simulations of "Old Europe" constructed in American theme parks, which are no longer able to palliate, supplement or replace an increased interest in experiencing the real world."

The Swiss sponsors of the event in Switzerland also managed to include an intercultural dialogue among the participants. Garry Wingenberg of the Chicago Times is fascinated with the architectural layout and style of Swiss alpine villages and commented, "In the USA we have national parks, but one is unable to move as freely there as it is possible here. Our parks have dangerous animals, such as bears, mountain lions, snakes and crocodiles. Here in Switzerland, tradition and customs are alive, and the ancient villages are in close proximity to one another. By comparison, the distances in the USA are much greater."

Note:
Thilo Gehrke, 41, is a journalist, photographer and a freelance author living in Hamburg. Through the media, he has chronicled the German re-unification from social, economic and security aspects. He is a member of the Scientific Forum for International Security of the "Führungsakademie der Bundeswehr" [the Army Training Academy].