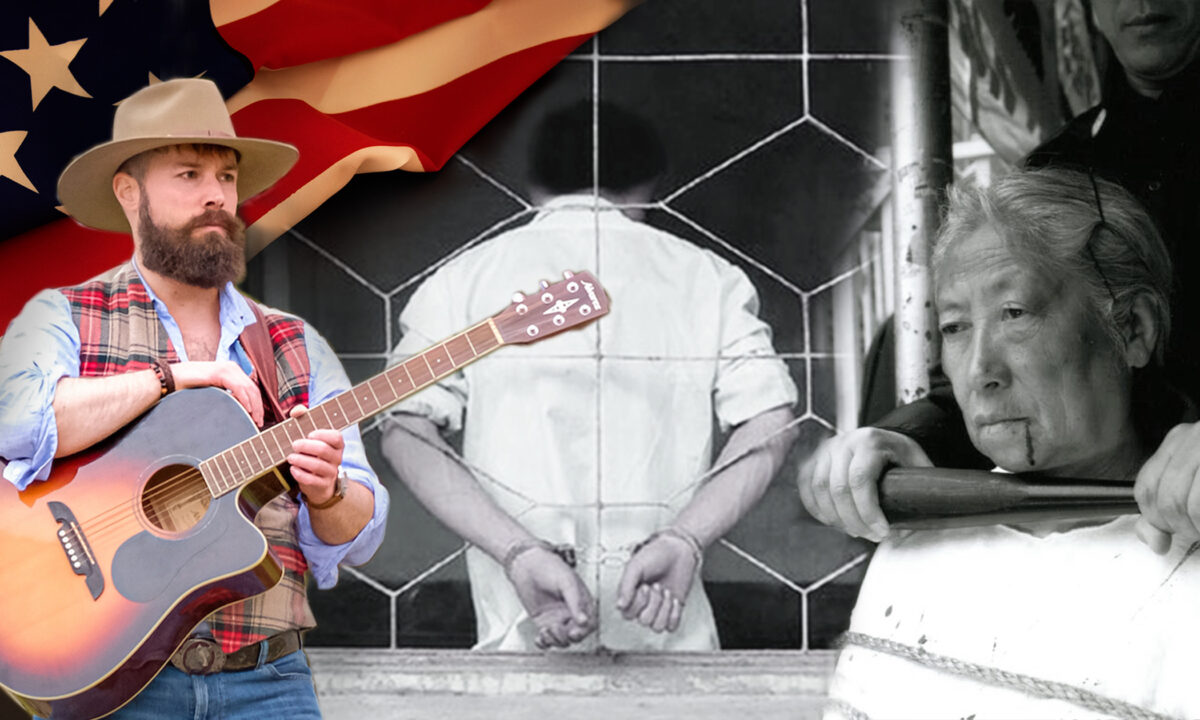 American Singer-Songwriter Warns of the Evils of Communism: ‘Our Civil Liberties Are God-Given’

'I hope people become clear on what the Chinese Communist Party is and what it will always be. Evil can’t change its nature, only its skin,' says the artist
BY Daksha Devnani TIMEJuly 19, 2022 PRINT

Singer-songwriter and human-rights activist James H. White, living in Mount Hope, New York, has been working tirelessly for the past 15-plus years to expose “the evils of communism.”

White, who believes communism is “a hard fist, brutal tyranny,” has co-written, hosted, and narrated the award-winning documentary Canaries in a Cold War, which reveals how communist leaders’ sinister goals are gaining ground beyond the borders of China. Drawing a sharp contrast between communism and traditional culture, White told The Epoch Times that the former “advocates and awards evil,” while the latter “links mankind to God.”

His latest song, “They Were The Ones,” is about three brave sisters who have been persecuted for their faith. The song highlights what has been happening in China since July 20, 1999—the day the Chinese Communist Party (CCP) launched a nationwide persecutory campaign to eradicate the spiritual practice of Falun Gong.

“One day, people will mourn this genocide,” White said. “It’s something people have heard about, but it’s hard to stomach and understand its scale. The CCP is targeting 100 million people. That would be like one third of the United States being persecuted.

“It’s unknown how many practitioners have been tortured to death or killed by forced organ harvesting, but I won’t be surprised if one day, we find out it’s been many millions. It’s truly tragic.”

Watch his latest song, “They Were The Ones”:

White’s work as a human-rights activist began in 2005 when he graduated from the University of Pennsylvania and moved to Los Angeles to pursue a career in acting and screenwriting.

“When I heard about the atrocious human-rights abuses in China, I switched gears and focused on raising awareness for those issues. After learning about the evils of communism, for the first time in my life, I really appreciated the freedoms we have here in America. I grew up taking them for granted. We all have differences as Americans, but our civil liberties are God-given and unite us all.”

Now a resolute human-rights activist, White’s early life was marred with addiction. Growing up, his weekend drinking bouts turned into a daily habit. By his early 20s, he became a blackout drinker, and his drug abuse was out of control.

“Bad things happened,” White said. “I was an athlete and blew out my knee on my 19th birthday while in a blackout; I was kicked out of college; my parents were in a constant state of stress about my addictions, and my relationships with friends were deteriorating.”

During this time, White was also inclined to Eastern philosophies and had begun to study yoga and meditation. Those mediums, according to him, did have some effect on his addiction, making him quit for a period of time, but only to swing back to his old habit. “The addictions were always lurking, waiting,” he said. “One drink was too many, one thousand wasn’t enough.”

After struggling for years and being in denial about his addiction, he knew it was time to quit. He enrolled himself in a sobriety program. While White was in the process of getting sober, he came across the ancient, self-cultivation practice of Falun Gong (Falun Dafa); the five sets of meditative exercises had a considerable impact on him. Falun Gong’s tenets of truthfulness, compassion, and forbearance left a deep impression on him.

“I could really feel the energy and felt a magnetism in my hands when I practiced,” he said. “I also noticed that if I practiced and then worked out, I was noticeably faster, stronger, and more physically coordinated. There’s something else that stood out about Falun Gong: there was no money involved. All the teachings are free online. Even donations aren’t accepted. To me, that really spoke to the practice’s purity.”

White was confident that he wanted to continue this practice. Taking out time to do the slow-moving meditative exercises regularly became his new habit. And after a year of being sober, he returned to the University of Pennsylvania and graduated a couple of years later on the Dean’s List.

White has been sober for the past 20 years.

“Once I started practicing Falun Gong, my sobriety has been fairly smooth and easy—I don’t struggle staying sober. I never went back to drinking, drugs, or smoking cigarettes. My addictions were so severe I’m sure I would have eventually been out on the streets living in a horrific environment. I’m extremely fortunate to have remained sober for so long,” he said.

“Of the three universal values of truthfulness, compassion, forbearance, I thought most about being truthful. My previous life as an alcoholic and addict was filled with lies, both to myself and those in my life. So, I really tried to be trustworthy and honest.”

With a second chance at life, White also found a reason for purposeful living. In 2005, he happened to learn how the Chinese Communist Party (CCP) has been persecuting Falun Gong since 1999, violently suppressing over 100 million adherents.

In 2008, a global “Human Rights Torch Relay” traveled around the world at the same time as the Olympic torch to protest the 2008 Beijing Games. After the relay passed through Santa Monica, California, White saw the leftover signs that read, “No human rights, No Olympics.” Inspired by men who carried POW (Prisoner of War) flags during marathons in the past, White thought of using one of those left over torch relay signs to raise awareness about China’s human-rights abuses.

White made a daring entry into an Olympic-length triathlon in 100-degree-Fahrenheit weather in the Palm Desert, California. Without any prior training, he participated in the triathlon, comprising a 1-mile ocean swim, a 24-mile bike ride, and a 6-mile run.

Arriving with a friend’s mountain bike, a surfing wetsuit, a helmet, and a big human-rights sign on a wooden stake, White was a bit unnerved. “My biggest cause for concern: I had zero clue if I could actually finish the race. I had never swum a mile in my life, let alone biked for over 20 miles,” he said.

White was the only person who was strapped to a sign, but he successfully managed to finish the swim; the next was “the most dangerous part”—the bike ride. He felt encouraged by cyclists zooming past him who urged him to not give up. Despite feeling exhausted and dehydrated, he was determined to continue and complete the final run.

“My body had started shutting down,” he recalled. “I desperately asked myself, ‘Why am I doing this?’ And I remembered. To raise awareness for the human-rights abuses in China, particularly for the persecution of Falun Gong. That thought was enough, and I kept on.”

Half jogging, half stumbling, White raised up the sign, “No human rights, No Olympics,” for all to see, and crossed the line with several others, feeling accomplished that he had finally done it.

‘The Evils of Communism’

White wanted to do more to further expose the atrocities of communism, so he took a step forward and began songwriting. The first song he worked on was “Rally the World,” which he co-wrote with Kevin Dippold, who performed and produced it. For White, working with Dippold—who’d worked with The Smashing Pumpkins, Ziggy Marley, and Jessica Simpson—was a great opportunity, as he got to learn a lot about songwriting and production.

In 2020, White also decided to give singing a shot and co-wrote a military tribute, “Purple Heart,” with Katy Mantyk, which features her as well. Working with producer Lord English, the track was released for Veterans Day that year, amassing encouraging feedback.

“Sacrifice, honor, and freedom are virtues that move me,” White said. “I’m very new at songwriting and have only released a few songs, but you can hear these themes in my music.

“When I write, stories come out of me. I typically just sit down, and words and tears pour out of me. Pain pours out of me. When I sing and connect with the lyrics, I’m usually hit with the same deep emotions.”

White finds a deep connection with Aristotelian tragedy and believes that art shouldn’t just reflect reality. “Art is what life should be. By opening people’s hearts through art, giving them a catharsis, people will be inspired and motivated for change,” he said. “In my music, I hope to express both strength and vulnerability, opening a space for courage and tears.”

The passionate artist also draws inspiration from the life story of one of his heroes: Martin Luther King Jr. “His speeches, heart, messages of unity, peace, and freedom are all reasons why I make music today,” White said. “He was a deeply spiritual man and warned of the evils of communism, that it feigns goodness, but only ever achieves evil.”

White’s recent song, “They Were The Ones,” is a soul-stirring piece based on a story of three sisters—Chunmei, Chunling, and Chunxia—who were tortured in China for their faith.

The song is a combined effort of several artists. White co-produced the song with Dario Forzato, an Italian composer and producer. To represent the three sisters on the track, White solicited the help of three women for the backup vocals: Finnish pop star Anna Kokkonen; White’s wife and up-and-coming British singer-songwriter, Vic May; and Joan King, herself a Chinese labor-camp survivor, as was also the track’s erhu soloist, Meixuan.

Just like all of White’s other songs, the track was recorded in 432 Hz, the frequency that is often used in older classical music, such as famous works from Beethoven. “To me, it’s a much warmer energy than the modern standard of 440 Hz, which feels a bit tight and strained in comparison,” he explained. “432 Hz helps open the heart.”

The story of the three sisters has also been featured in the documentary “Canaries in a Cold War”; the sisters’ selfless and altruistic nature left a deep impression on White. Despite the persecution and having gone through countless hardships, these brave women hold no resentment in their hearts, and they still care about people back home who are facing a tragedy similar to theirs. Having escaped China and now residing in a free country, the three sisters told White about their love for America and Americans.

“After the Holocaust, in the West, we made a promise never to let this happen again,” White said. “But we have let it happen again. People today often attack America and the ideals it stands for. To hear how much these sisters appreciate what we stand for shows how special our Constitution and the liberties we have here are.

“Connecting with the interviewees in the documentary—whether politicians, human-rights experts, or the survivors themselves—had a lasting effect on me. The hardships they suffered and the fortitude that they all showed truly touched my heart.

“I hope people become clear on what the Chinese Communist Party is and what it will always be. Evil can’t change its nature, only its skin.”