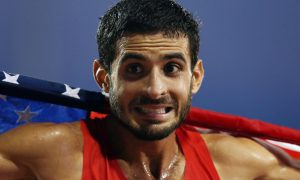 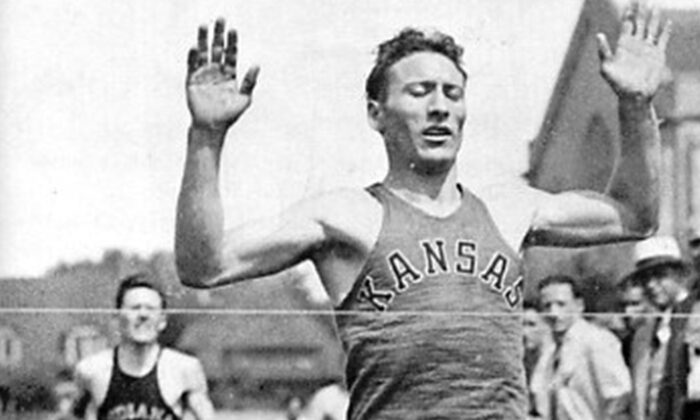 He nearly lost his legs as a boy. Who would expect him to run the 1,500m in the 1936 Olympics, setting a new world record?

This quiet, retiring middle-distance runner from Atlanta, Kansas, never made for spectacular copy like his Team USA mate and good friend Jesse Owens did. However, Glenn Cunningham was every bit as talented and determined to succeed as the famous sprinter.

Knowing the physical adversity he overcame to shatter records for mile races makes it clear that Cunningham’s story and achievements can still inspire today.

Cunningham grew up in a remote region of rural Kansas with his six brothers and sisters. His hometown of Atlanta had a population of about 330 at the time of his birth in 1909. Nothing in his background or upbringing would suggest that this boy would go on to run for his country at two consecutive Olympic Games.

In fact, it seemed more likely that Cunningham would never run at all. When he was only 7 years old, tragedy struck his family and the town. Glenn and his older brother Floyd had arrived at the local schoolhouse early one chilly day in February 1917 and were trying to get the fire started to warm the room up. They poured what they thought was kerosene into the stove, but it turned out to be gasoline.

As the local paper described it, “[…] an explosion followed, the burning gasoline from the bursted can striking them on the lower part of the body and the legs; they at once ran to their home two miles away but the saturated clothing continued on fire and the burns were deep.” Glenn was lucky to survive, but his brother Floyd did not.

Even as the family buried one of their sons, the other lay in his hospital bed covered in severe burns. It seemed likely that even if doctors did not amputate his legs, he would be unable to walk unassisted for the rest of his life.

As Cunningham said in a 1981 interview to promote the release of his autobiography Never Quit, “I had lost all the flesh on my knees and shins, as well as all the toes on my left foot. My transverse arch was mostly gone.”

All the predictions that he would never walk again only inspired Cunningham to beat the odds. After he overheard a visitor telling his mother to prepare to think of her boy as an “invalid,” he found the resolve to get up. “I remember saying over and over, ‘I will walk! I will walk!’”

With the support of his mother, Cunningham rehabilitated himself and discovered that he excelled at athletics, including baseball and track. His injured legs would never completely heal, but somehow he found the strength to run through the pain, including one high school race in Chicago when an infected foot sent his temperature soaring to 104.5 degrees F (40.3 degrees C).

Cunningham began shattering records as a senior in high school, completing a mile in just 4 minutes and 24 seconds. He attended the University of Kansas and continued to win in his conference and the national championships. When he was just a sophomore in college, Cunningham made the U.S. Olympic team and competed in the 1,500m in the 1932 summer games in Los Angeles.

While Cunningham was battling illness once again, as he would throughout his storied career, he still managed to finish 4th. Disappointed with anything but first, Cunningham pushed himself to keep going, and by 1934 had whittled the world record for the mile down to 4:06.

By this point, Cunningham’s spectacular feats on the track and his exemplary life off it were making headlines. Historian Mark D. Hersey from the University of Kansas explained that “his good sportsmanship (coupled with his otherwise wholesome image—he claimed never to have smoked or consumed either coffee or alcohol) made him very popular with fans as well as journalists.”

Nicknamed the “Kansas Flyer” and the “Iron Horse of Kansas,” Cunningham never performed better than when the odds were against him and people doubted his abilities. In 1936, sports journalists began speculation that he was past his prime, which gave him the motivation to run even faster. “I just wanted to let my running speak for itself,” he said in 1981.

When the 1936 Olympics in Berlin came along, Cunningham ran the fastest 1,500m of his career up to that point, beating the world record with a time of 3:48.4. But on that incredible day, he was bested by just 0.6 seconds by New Zealander Jack Lovelace.

After the race, the press wanted him to talk about his disappointment, but he wouldn’t indulge them. “I ran a fast race and broke the Olympic record for the 1500 meters, and only one person in the world ran it faster that day,” as he recalled in his 1981 interview.

Some runners might have been defeated by the loss. Cunningham, however, came back to set a new world record for the indoor mile in 1938, clocking 4:07.4. He continued racing competitively until the outbreak of World War II interrupted his planned comeback for the 1940 Olympics.

After retiring from racing, Cunningham didn’t slow down. When he met and fell in love with his wife Ruth, she challenged him to make the next chapter of his life as powerful as the first. Together, they would go on to set up the Glenn Cunningham Youth Ranch in Cedar Point, Kansas, where they hosted an estimated 10,000 underprivileged, orphaned, and abused children over the course of almost three decades.

As a mentor to these kids who struggled with various trials and tribulations as he had, Cunningham drew on his experience as a world-class runner. As he said, in life as “in running it is man against himself, the cruelest of opponents. The other runners are not the real enemies. His adversary lies within him, in his ability with brain and heart to master himself and his emotions.”

Cunningham passed away in 1988 after having inspired people around the country with his athletic exploits and personal courage and served as a surrogate father to countless children in need.