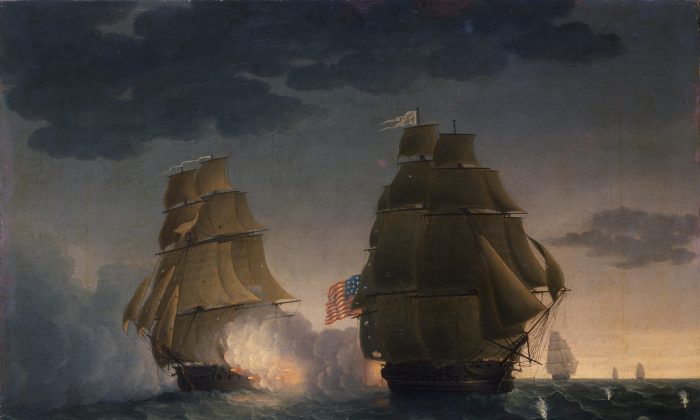 NEW YORK—The importance of art depicting people, places, and events (as opposed to art that looks like a screensaver) is that it is relevant to human history and not just art history.

The first 200 years of American painting, fortunately, is both.

“To me, paintings are among the most important historical documents we have,” said Linda S. Ferber, Ph.D., vice president and senior art historian of the New York Historical Society (NYHS).

Ferber curated From Colony to Nation: 200 Years of American Painting, which opened June 7 at the NYHS.

The exhibit mines the extensive and little known, permanent collection of the NYHS, the oldest museum in the city, for paintings from 1720 to 1918. Many of these works have not been seen in decades and required extensive conservation to be exhibit-ready.

From Colony to Nation

The exhibit is organized in chronological order, tracing the styles and subject matter beginning with colonial painters such as Charles Willson Peale (1741–1827) and John Durand (1731–1805). It then takes us to the founding of the republic, to the War of 1812, and then to the years of exploration and nation building. Finally, it closes with the industrial postwar era and the turn of the 20th century.

The paintings deal with family, community, patriotism, the economy’s shift from agrarian to industrial, and burning social questions of the day like environmentalism and slavery. Throughout the whole progression, painting styles evolve and blossom, becoming mature in the 19th century as painters solidified basic skills and imbued their works with a sense of American character.

The first paintings in the series come from the American colonies. They are mostly portraits of the young society’s elites, colonists who descended from important European families.

“Mrs. Thomas Van Alstyne (b. 1695)” by Nehemiah Partridge in 1721 shows the wife of the prominent Dutch settler. Her left hand, which bends in an unnatural and distorted manner, holds a delicate flower meant to accentuate the sitter’s feminine grace.

“The awkwardness you see is because the painters were not academically trained,” said Ferber. “The ambition is there, but the training was not.”

“Colonies look to the center of the empire, not only for governance, but for style and art-making,” Ferber said. “Some were European artists who came to the colonies to serve the elites. Some were homespun artists who were able to learn from artists visiting from Europe.”

The two ends of the gallery are dedicated to portraits of the artists active at the time; it is evident it was a close knit circle; Benjamin West painted his student Charles Willson Peale, Gilbert Stuart painted Peale’s son Rembrandt, and Abraham Delanoy painted his teacher West.

“West’s London studio was the first great center for that generation of American artists,” Ferber said. West was the painter to the King, but always kept his American citizenship.

It was a tough line to walk.

“He must have been the consummate politician; he weathered the revolution and managed not to lose his royal patronage yet at the same time never stepping away from his American citizenship.”

“What makes them American to me is their subject matter—whether the subject or sitter is American, and whether they address American issues,” Ferber said.

An American painter need not be born in America. Ferber refers to German-born Albert Bierstadt, regarded as an iconic American painter for his sweeping landscapes of the West and their role in fulfilling manifest destiny.

In style and technique, American painting is not something invented to be revolutionary or to set the new nation apart from the old countries.

“American style is a continuation of the European tradition, only what they depicted and evoked were American subjects and American feelings,” Ferber said.

What’s striking about the exhibit’s selection overall (aside from an abundance of war scenes) is the abundance of portraits, a testament to Americans’ love of celebrating the individual.

Portraits of single figures were heavily represented in the Colonial Period and the Gilded Age sections.

In both eras, painted portraits were primarily of society’s upper echelons whether they be colonists, military men, or, as in the Gilded Age, first generation industrial millionaires.

Gone were the humble, intimate portraits of Colonial times.

“You’ll notice that all the portraits are lifesize. And that was to show their presence. They were very commanding,” Ferber said. These “grand manner” portraits were meant to immortalize the new American royalty. “These were society portraits; they were hung at home, but definitely meant to be seen.”

While the person on the canvas was rich, increasingly in the Gilded Age, so was the person working behind it.

“Portrait painters always commanded high prices, but in colonial times they were journeymen-workmen; they were still considered artisans,” Ferber said. “When you get into the Gilded Age, a lot of the artists were high-born themselves.”

In the final analysis, no one painter or sitter, battle or landscape can represent all of American history, spirit, or painting; and this exhibit takes a neat sample of the rich dialogue that took place over America’s first 200 years.