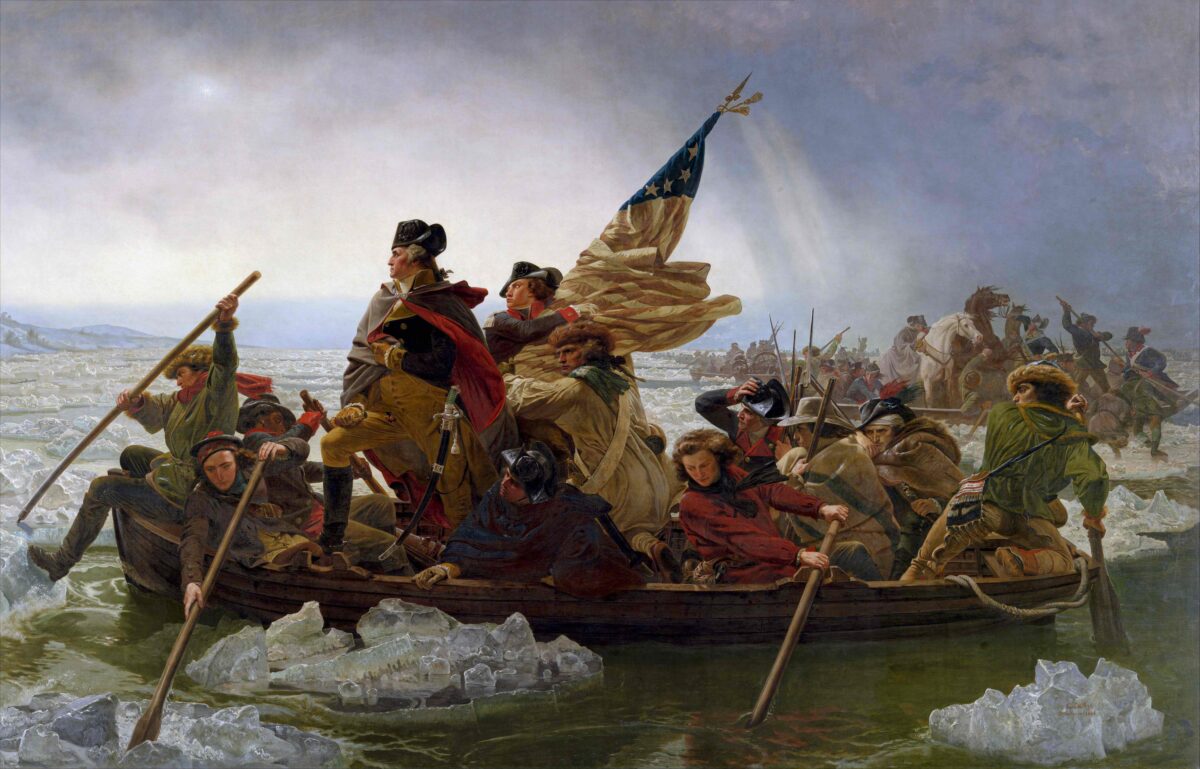 Inspired by the freedom of his adopted country, German-American artist Emanuel Leutze painted the most iconic scenes of our nation’s history
BY Bob Kirchman TIMESeptember 16, 2022 PRINT

It is the night of December 25, 1776, and ice fills the Delaware River. The men of the Continental Army shiver as they cross under cover of night, on their way to engage Hessian troops at Trenton, New Jersey. Standing in the boat is a resolute George Washington, face steeled for the battle to come. Before the men boarded the boats, Washington had officers read to his soldiers the words from Thomas Paine’s “The American Crisis,” written only days before on December 23, 1776. The opening paragraph of the pamphlet reads,

“These are the times that try men’s souls. The summer soldier and the sunshine patriot will, in this crisis, shrink from the service of their country; but he that stands by it now, deserves the love and thanks of man and woman. Tyranny, like hell, is not easily conquered; yet we have this consolation with us, that the harder the conflict, the more glorious the triumph. What we obtain too cheap, we esteem too lightly: it is dearness only that gives every thing its value. Heaven knows how to put a proper price upon its goods; and it would be strange indeed if so celestial an article as Freedom should not be highly rated.”

Painted in 1851 by Emanuel Leutze, “Washington Crossing the Delaware” immortalizes the image of the ragtag Continental Army going forth from Valley Forge to engage the forces of the then greatest nation in the world. It is, rightly so, one of the most often reproduced images from American history. Open any good textbook on the subject, and it is there. Leutze’s portrait of Washington still evokes wonder today.

A century after its creation, American artist Norman Rockwell even painted a “painting within a painting” of this iconic artwork for a 1951 Saturday Evening Post cover. In Rockwell’s painting, a group of schoolchildren and their teacher stand in front of Leutze’s great painting in admiration. Here, Rockwell pays homage to “Washington Crossing the Delaware” and its priceless illumination of our history for many generations.

This was not Leutze’s first painting of this scene. His original painting of the historic crossing, in 1850, became part of the collection of the Künsthalle in Bremen, Germany. It was destroyed by an Allied bombing raid in 1942. In fact, this first masterful work almost didn’t even make it out of his studio; it was damaged by fire in 1850 when his studio burned. Leutze restored the original, and it is the one that remained in Germany until its destruction.

Leutze did two more renderings of the scene. One is now in the Metropolitan Museum of Art in New York. After its New York exhibition in 1851, the painting was purchased by a private collector but was subsequently given to the museum in 1897. The other rendering found its way to the West Wing of the White House until it was sold to the Minnesota Marine Art Museum in Winona, Minnesota, in 2015.

There is a strong allegorical component to the painting: Washington’s determined stance, the triangular composition, and the lightening sky. In truth, this scene is not completely accurate. Idealized, this painting remains a testimony to the valor of Washington and the Continental Army. It was reported to be a dark, wretched night with freezing precipitation (ice and snow) drenching the men in the boats. The Durham boats Washington actually used were bigger than Leutze had depicted. If Washington had actually stood in a boat that size, he would likely have fallen into the water. In the larger boats, the men might indeed have stood, braced against the swells, to avoid contact with the cold bottom of the craft.

A few men actually did fall overboard that night, but no one perished in the river. Several men did die from exposure on the march to surprise the Hessians. The surprise worked, however, and Washington’s men captured 900 soldiers, which turned the course of the war. The event, and Leutze’s later depiction of it, would find their permanent place in the American memory. Leutze also painted a companion work, “Washington Rallying the Troops at Monmouth,” commemorating another Revolutionary War battle in New Jersey.

How did a man born in 1816 in Schwäbisch-Gmünd, in the Kingdom of Württemberg (now part of Germany), come to paint such an iconic American historical scene? The story begins when he was 9 years old. His parents came to America as political refugees, settling first in Fredericksburg, Virginia, and later in Philadelphia, Pennsylvania. Young Emanuel’s father was sickly; the youth spent long hours attending to his needs. It was during that time that he developed his sketching abilities. At age 14, he was selling portraits he painted for around $5 apiece. When his father died, he was able to support himself with his painting.

In 1834, he began to study under John Rubens Smith, a Philadelphia portrait painter who had come to the United States from London, England. Smith had studied art at the Royal Academy. Leutze, after achieving some success as an artist, returned to Europe to attend the Kunstakademie Düsseldorf art school. From there, he went to Munich, in Bavaria, studying the works of Nazarene painter Peter von Cornelius and history painter Wilhelm von Kaulbach. It was here that he completed his great work, “Columbus Before the Queen,” in 1843. The explorer appears before the Spanish monarchs Ferdinand and Isabella, having been brought back in chains after being replaced as governor in the new Spanish colonies. Leutze would visit the Columbus theme at least six times in other works.

Emanuel Leutze returned to the United States in 1859, opening a studio in New York. He divided his time between New York and Washington, where he created portraits of notable individuals, among them Chief Justice Roger Brooke Taney. The portrait, painted just two years after the infamous Dred Scott decision, has been described by Antonin Scalia, former U.S. Supreme Court justice, as follows:

“[Taney is depicted] in black, sitting in a shadowed red armchair, left hand resting upon a pad of paper in his lap, right hand hanging limply, almost lifelessly, beside the inner arm of the chair. He sits facing the viewer and staring straight out. There seems to be on his face, and in his deep-set eyes, an expression of profound sadness and disillusionment.”

Such was the artist’s masterful ability to capture a likeness—and a moment in history.

In 1860, Leutze received a commission to paint the mural in the United States Capitol, “Westward the Course of Empire Takes Its Way,” or “Westward Ho,” as it is sometimes called. The painting shows dramatically the exploration and settling of the American frontier. Explorers and families in covered wagons traverse a dramatic range of mountains toward the western shores. Lewis and Clark, Daniel Boone, and the countless pilgrims who made their way west are remembered in “Westward Ho.”

Leutze’s art examined the contrast between Europe’s monarchies and the American experiment in self-government. Indeed, he looked forward to the day when representative government might at last come to the German people. His painting of “George Washington Crossing the Delaware” is primarily directed toward those aspirations and was aimed at the people in the various states that would become Germany. Leutze died in Washington, D.C., in 1868 from heat exhaustion while preparing to paint yet one more great work. It would have been called “The Emancipation of the Slaves,” proving once again the great artist’s love for freedom and his adopted country.

Bob Kirchman
Follow
Bob Kirchman is an architectural illustrator who lives in Augusta County, Va., with his wife Pam. He teaches studio art to students in the Augusta Christian Educators Homeschool Co-op.
SHARE
Friends Read FreeCopyFacebookTweet
You May Also Like