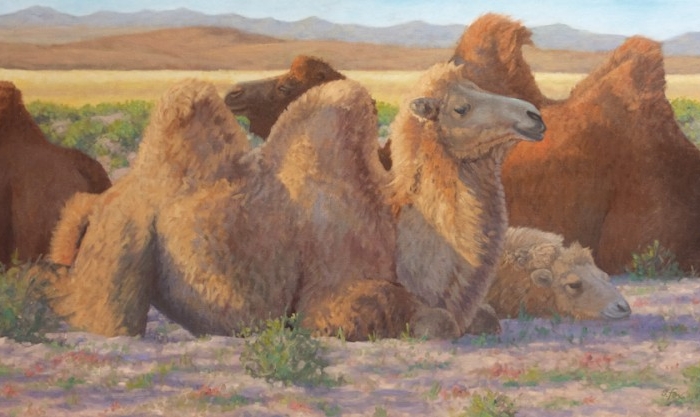 American oil painter Susan Fox has traveled the world on wildlife expeditions, photographing and painting her way through the pristine wilds of Kenya and all over North America. But a 2005 trip to Mongolia opened a door to a captivating world and propelled her career down a path closely linked with wildlife conservation.

Fox grew up surrounded by California’s redwood forests in rural Humboldt County. Her two loves as a girl were animals and drawing them.

“If I had paper and pencil, I was happy,” she said. “Whenever I drew, I drew animals

Fox worked in graphic design and sign making until she went back to school in 1987 at age 35 to get her BFA at the Academy of Art University in California.

But her childhood dream hit a roadblock when she discovered that the trend of rejecting traditional painting had been academically embraced.

“At the time, the Fine Art department was not teaching the craft of oil painting, just self-expression, so I majored in Illustration instead, which worked out very well,” Fox recalled. “That has now changed. But it meant I wasn’t able to pursue my childhood goal until I was able to study privately for two years with a teacher here in Humboldt County, starting in 1995.”

Her illustration training, and then successive private training in oil painting, has boosted her ability to accurately and quickly render creatures she sees on her trips.

Fox’s love of animals and the earth has found a home in Mongolia, which, on the brink of a mining boom, is becoming increasingly aware of its own dependence on the land as well as foreign commercial interests in it.

Mongolia has a charmed history. From its windy steppes, emerged the conquering hordes of Genghis Khan, whose short-lived empire, spanning most of Eurasia, created the conditions for the modern world.

As Genghis Khan’s grandsons gradually lost their grasp of the fractured empire, the nation came under the control of China’s Qing Dynasty. Mongolia fought against Chinese influence for decades after the collapse of the Qing Dynasty in 1911. When Mongolia finally saw light, it succumbed to a new pressure, this time from the Soviet dictatorship in the north.

Sandwiched between Russia and China, Mongolia has the lowest human population density of any nation on earth. Today, the people of this landlocked country are navigating sweeping changes brought about by its fledgling democracy, rapid urbanization and globalization, and a shift from nomadic to sedentary life.

Pushed by illegal hunting, competition with livestock, and climate-change-related habitat loss, an estimated 100 species of animals are classified as extremely rare, according to the United Nations. These include the snow leopard, saiga antelope, argali sheep, and the Przewalski horse, an ancient equine species that went extinct in the wild in 1969, but has been reintroduced to protected lands via many years of captive breeding.

Yet Mongolia remains one of the great wildlife-viewing destinations of the world. According to a 2004 World Wildlife Fund special report, 139 mammal species and 449 bird species live in its six biomes, and Mongolia’s wildlife is one of its top tourist attractions.

Its art, too, is diverse, and the natural environment has long been a subject of Mongolia’s artists. However, Mongolia does not share the West’s tradition of painting wild animals in their natural elements, as exemplified by artists like Edwin Henry Landseer, Kim Donaldson, and Friedrich Wilhelm Kuhnert. Their paintings bring out the majesty of their subjects, and theirs and similar work have inspired many conservation efforts.

“Mongolians are surrounded by animals, and often it’s taken for granted, especially if you live in the countryside, where animals and humans coexist in close familiarity,” Fox said.

That’s where Fox’s perspective as an outsider comes in. Through her traditional-style oil paintings, she creates a fresh lens for looking at and thinking about native wildlife.

“When I see an animal in the wild, I feel excited, deeply satisfied. It’s a humbling experience, and always very special.”

Fox emphasizes taking the time to really see and to put aside one’s notions as a human observer.

“Humans push into the world seeking animals, projecting their needs to be close and have contact. I’ve learned that you have to let that go,” she said. “I try to watch and stay energy-neutral and see what happens. Natural behavior makes the best paintings. Particularly in Africa, people tend to go on safari with a mental checklist. There’s a big difference between seeing an animal and watching it.”

While Fox began her professional painting career as a wildlife artist, her interest naturally broadened to include the people who depend on animals and their land.

It began during her 2008 trip to Mongolia where, at Ikh Nartiin Chuluu, she really noticed the domestic horses for the first time as a group of them grazed past the ger camp where she was staying. Later on that same trip she started noticing the herders with their horses more.

“I realized that I can’t separate horses and their people, so I began drawing figures for the first time in many years. I’m not only a wildlife artist anymore. I consider myself an American artist who paints the land, people, and animals.”

In 2009, she won a grant from the Artists for Conservation to study Mongolian argali mountain sheep and assist in the creation of a women’s felt-crafts cooperative at Ikh Nartiin Chuluu Nature Reserve.

The felt artists now showcase their items to visitors, generating income and highlighting one of the many way Mongolians depend on their herds. Simply seeing foreigners take interest in these products heightens the incentive to preserve natural resources, Fox says.

Currently, Fox is planning a WildArt Mongolia expedition to take place in late 2013, a first-time collaboration between American and Mongolian artists. The group will journey to the Western Gobi desert, where they will explore the landscape and wildlife along the way. An exhibition and book will be put together, from the resulting artwork and journals kept during the expedition, to raise awareness about Mongolia’s endangered species and habitats.

Fox believes that artists have huge potential to drive change—”especially in Mongolia, where art is valued and highly respected,” she said. And the arts community is flourishing.

“I think that Mongolia is the last undiscovered art destination. There are more galleries every time I go,” she said, marveling at the sheer diversity in styles.

“The range of personal expression is just incredible. During the communist era, social realism was the only acceptable way to paint. When the government changed over, people could paint however they wanted to. The trend among younger artists was away from traditional and representational art, but older artists I’ve met showed so much flexibility and creativity in all directions.”

For Fox, the arts community in Mongolia is a testament to the ingenuity and adaptability of the Mongolian people.

“It’s amazing how they synthesize cultures. No matter what style they borrow, it always comes up Mongolian; it’s just a feeling that’s there. They’re not threatened by other cultures at all and adopt styles according to their needs.”

Throughout history and up to the present, Mongols have eagerly absorbed the traditions of peoples they encountered. Genghis Khan appropriated the Uighur script because his armies and administration needed a writing system. As a nomadic people traditionally eschewing permanent buildings, they adopted Tibetan and Manchurian architecture to build temples and monasteries following the nation’s conversion to Buddhism.

In recent decades, Mongolia has been just as eagerly adopting Western technologies and lifestyles. The capital city, Ulan Bator, is experiencing a building boom as more and more energetic and educated young people flock there for non-pastoral careers. Combine that talent pool with the mining of the country’s vast mineral deposits—all eyes are on the up-and-coming economy.

The 2012 World Rich List compiled by Knight Frank and Citi Private Bank lists Mongolia among the top 10 fastest-growing economies. BRIC countries Russia and Brazil did not make the cut.

“It’s ironic. There’s a deep love of the land, but the future of their economy depends on resource extraction, which means mining the land,” Fox said. “I think the mining is going to happen, but it needs to happen responsibly. And that’s something Mongolians have to figure out on their own.”

For those of us situated far from the land of Genghis Khan, much can be done to protect the natural lands around us. “Everyone can do something,” Fox says. “Whatever catches your eye, whether it be mining, air pollution, recycling, whatever it is, find a reputable organization and ask how to help.”

Fox is on the board of directors of the Society of Animal Artists and has shown at various national juried shows and the American Academy of Equine Art. For more information about Susan Fox and her artwork, visit her blog, Foxstudio.wordpress.com