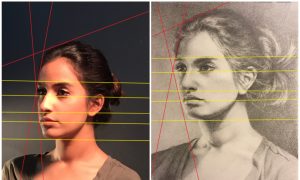 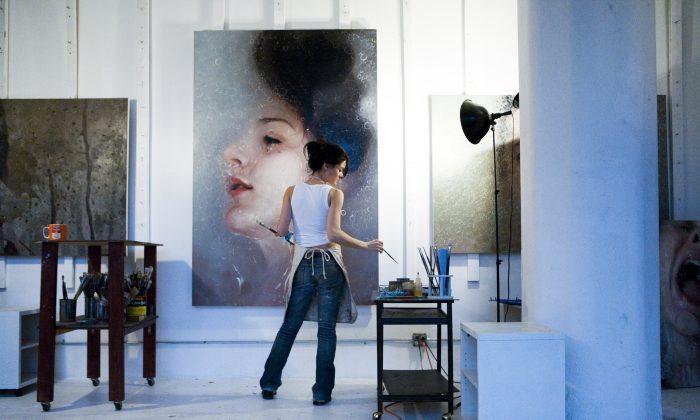 Alyssa Monks: The Photograph as a Painter’s Bully and Helper

This is part 4 of a 9-part series. To see the full series, see At the Confluence

NEW YORK—Alyssa Monks’s figure paintings have a sort of gritty intimacy to them. Men and women seem to languish in the isolation of their own nakedness, their vulnerability and fragility writ large on the canvas but obscured by vapor.

Monks has long been intrigued by the visual distortions and abstractions water produces on solid forms. By placing her models in the bath, she uses water, steam, and glass to add mood and mystery to otherwise straightforward figures.

Maybe because viewers are struck by their lifelikeness, they sometimes call them photorealist paintings, a label Monks feels misses the mark. Her interest is not in painting photos, though she does use photography throughout her process.

Each painting begins as hundreds of photographs of her models, dripping with water, pressed against foggy glass, or submerged in the bath.

Monks then sifts through them, collecting ideas for color and composition. Then she creates drawings from the photograph and uses the drawings as references. This way her painting is closer to the raw, emotional image she wants the viewer to see, rather than merely what the camera saw.

Though Monks prefers drawing from life, the nature of her subject makes it unfeasible.

“If I could draw from life—get people to stay still in the shower for days at a time—I would,” Monks said during an interview in her Brooklyn studio.

“[Drawing from life] is like love—you’re appreciating every bit of their likeness. In a photograph it feels removed, disconnected; you feel like a voyeur.”

As useful as a photo can be, it is easy to slip into mindless copying if one is not careful. Helpful information contained in the photos feels seductively comforting, stymieing any creative deviation; curious anomalies produced by the lens can send the painter on detours that do not further the artistic intention.

“The photograph can be a bully—it can be a bully telling you what to do. It’s important to pull back and make sure you’re the one making the decisions,” Monks said.

Realist painters today have more access to digital photography and photo manipulation tools than they know what to do with. It’s also easy to lose sight of the intended aesthetic when swimming in endless filters and color options. To provide some guidance, Monks designed and taught a workshop called Creating, Translating, and Surpassing the Photo-reference at the New York Academy of Art.

The course covered topics such as ideal lighting, camera settings, lenses, Photoshop, and printing, as well as when and how to step away from the photo reference and ways to avoid common pitfalls.

“It’s always this opaque, flat, slick surface, heavy on the outlines rather than the volumes of things,” Monks said.

“It’s harder to see the structure of a head, for example. So they all have this look of strange distortion that’s not informed. And photography does funny things with color as well—if you’re not careful, all your shadows will be brown or black. It distorts and flattens things.”

The Age of the JPEG

A seasoned painter can translate a smattering of pixels into paintings with texture, dimension, and subtle passages of color, but with the Internet, even the most painterly of paintings end up as JPEGs. Due to their size, static nature, and the fact that they are composed of points of light on a flat screen, the digital images often misrepresent the visual effect an artist intended.

“It’s an eight-foot painting that’s been compressed down to three-by-five JPEG on a screen. It’s going to be a different experience,” Monks said. “Musicians go through the same thing—people listen to their music on a bad stereo as opposed to hearing it live.”

Monks compensates for this inevitability by taking photos of her work using her camera phone as she’s working. Seeing the work-in-progress in a different way helps her spot areas that need to be fixed. It also gives her an idea of how it might look on an iPhone.

The tendency of photos to flatten paintings has pushed her to employ more impasto in her work.

“A lot of people will be viewing my work online, and I should be getting my point across even on there—so if brushstrokes are important to me, I need to make them even more obvious so that people can see that this is paint. When you compress an eight-foot painting down to a JPEG the brushstrokes will be gone and it’ll look like a photograph, which might be cool, but is not my intention.”

“Study the masters, study the drawing techniques that work and convey illusion, study painting techniques that are tried and true. Then experiment and follow an unpredictable vision based on an internal aesthetic that is nurtured and trusted. Experimentation is necessary part of creativity and I feel is not stressed enough. We seem to be more and more of a product-oriented mindset. We want a recipe that will work each time we try it. What is missing is the invention of a new language in art-making that is the true joy and mystery of creativity.”

“I admire many paintings and specific moments in paintings. Probably more than the painters, I like the moments in paintings where the application is so mysterious and unpredictable that I can’t wrap my head around it or get to the bottom of it completely. This is what attracts me the most about paintings. In all that chaotic and unexpected application, a vision appears and transcends the medium and the subject into a sublime experience. I see this often in the work of Vincent Desiderio, Alex Kanevsky, Cecily Brown, Jenny Saville, Gerhardt Richter, Betsy Eby, Bo Bartlett, Eric Fischl, and others.”