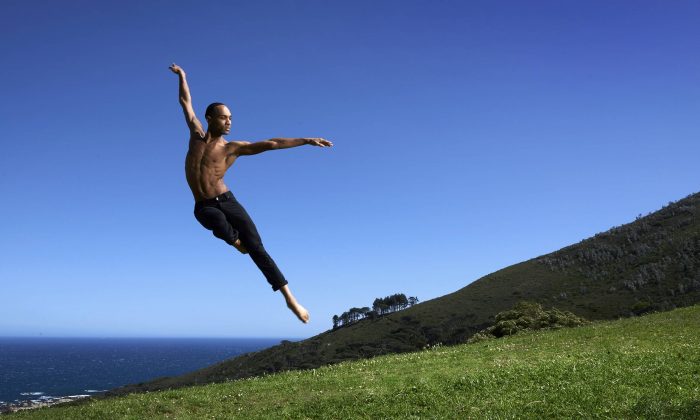 Under the direction of Robert Battle, the Alvin Ailey American Dance Theater has continued to maintain its high standards of performance while expanding the company’s repertoire.

One example of this is “Piazzolla Caldera,” a 1997 work by choreographer Paul Taylor, which the Ailey dancers first performed earlier in the current run at City Center. The piece is set to music by Astor Piazzolla and Jerzy Peterburshsky. The set, décor and costumes are by Santo Loquasto. The recorded music is all played by violinist Gidon Kremer.

The work is not a tango piece per se but a mixture of tango and modern dance, exploring the underpinnings of the form. It omits the intricate footwork of tango (as seen in shows like “Forever Tango”) and substitutes physicality, for example when dancers roll on the floor.

At the beginning, the male and female dancers are separate but they come together in various combinations. In the “Concierto Para Quinteto” segment, the lucky man (Vernard J. Gilmore) winds up with two women (Jacqueline Green and Jacquelin Harris). In another part, two men grapple with each other in a seductive way. The dancers communicate attraction and combativeness as well as, on occasion, loneliness.

“Awakening” is a new piece choreographed by Artistic Director Battle, set to clamorous wind orchestra music by John Mackey. The twelve dancers are dressed in white costumes designed by Jon Taylor. In these sterile outfits, they look like hospital orderlies or perhaps patients.

The dancers rush around chaotically as if they are afraid of an impending cataclysm. Then, one (the magnetic Jeroboam Bozeman) takes center stage, giving the impression that he is the one who will save them.

During this run, the company is presenting the world premiere performances of “United America: First Movement.” The choreographer, MacArthur “Genius” award winner Kyle Abraham, has stated that this work is about the impact of incarceration on individuals and families. This is the first part of what is projected to be a three-part piece.

The movement, for three dancers (Ghrai Devore, Marcus Jarrell Willis and Jamar Roberts) is set to of Laura Mvula’s song “Father, Father.” It seems to depict a family (mother, father and son) falling apart. Presumably in the next part, one or more of them will go to prison. There were some extraordinarily intricate movements in the brief section (running under five minutes). My own preference would have been to wait until the whole work could be performed, which might have more of an impact.

The last piece on the program was Ronald K. Brown’s “Open Door.” This exuberant work, set to music by Luis Demetrio, Arturo O’Farrill and Tito Puente, performed by Arturo O’Farrill and his Afro-Latin Jazz Orchestra, could be interpreted as a rebuke to the anti-immigrant rhetoric we have been hearing from politicians. The energetic and colorful work ended the evening on a joyous note.

Ailey performances are never just about fancy footwork. The dancers seem fully invested in the emotions of the works, which often tackle social issues. This physicality and dramatic flair draws a visceral response from its audiences, who can’t wait until the end of each work to break into wild applause.