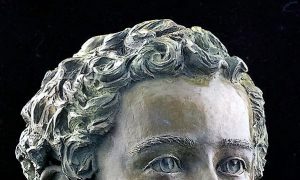 Sculptor Infuses Spirituality into her Art
0 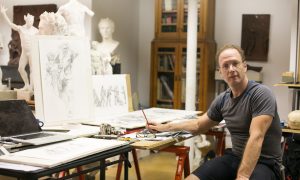 Sculptor Sabin Howard in Service of Something Bigger
0 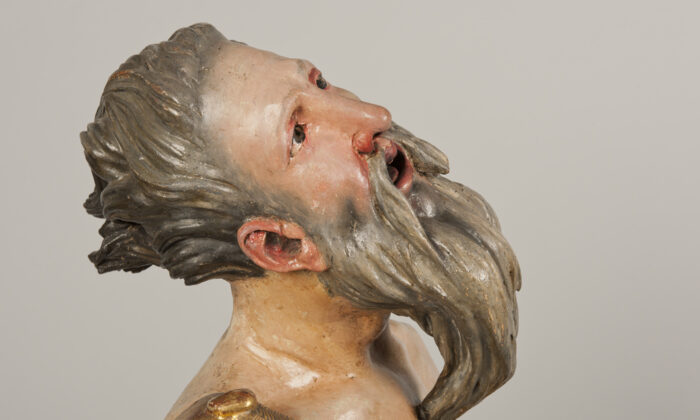 From Torment to Ecstasy: The Sculpture of Alonso Berruguete

The first sculptor of Renaissance Spain
By Lorraine Ferrier
Print

St. Christopher stares directly at me, and in a heartbeat I feel what he feels—even my mouth mirrors his. This realization, and level of intimate communion, makes me feel more than a little self-conscious as my gaping mouth brings me sharply back to reality. So palpable is St. Christopher’s conviction as he carries the Christ child on his shoulders across a river that I forget this St. Christopher is a polychromed wooden figure carved by Spanish Renaissance sculptor Alonso Berruguete.

Many times, I’ve looked at similar art and felt sympathy for the subject’s predicament; yet here, empathy grabbed hold of me and pulled me into St. Christopher’s experience. It’s an important distinction to make: Put simply, sympathy brings us to the conclusion of “I see,” whereas empathy offers us a greater depth of understanding as it moves us beyond “I see” and connects us to “I feel,” making any experience tangible and convincing.

Berruguete’s dramatic sculptures effectively communicate their inner meanings because in each he carves emotion—from the depths of despair to the heights of the sublime—not for the sake of sensationalism, but to convey a specific message.

My close encounter with St. Christopher was artificial—viewing a photo through a computer screen—yet, it gripped me entirely. I could only imagine the power of seeing it in situ.

But a face-to-face encounter with such a work would have been impossible as this St. Christopher by Berruguete (circa 1488–1561) was originally part of a high altarpiece, or “retablo mayor” in Spanish: in this case, a three-story-high altarpiece topped with a carving of the Crucifixion, at the monastery of St. Benedict the Royal in Valladolid.

Sadly, the retablo has long been dismantled; in the late-19th century, it was taken down and put on display at the National Museum of Sculpture in Valladolid. Some parts were lost or destroyed as part of the Spanish confiscation, when the government sold off the property of churches and religious orders to pay off public debt.

St. Benedict’s high altarpiece, Berruguete’s first major commission, is considered one of his masterpieces. But who was Alonso Berruguete? And why is he considered the first sculptor of the Spanish Renaissance?

The exhibition “Alonso Berruguete: First Sculptor of Renaissance Spain” introduces Americans to Berruguete, whose iconic status in Spain hasn’t quite reached the rest of the world. Indeed, this is the first exhibition of Berruguete’s works to take place outside of Spain. Seeing Berruguete’s works beyond Spain’s borders is problematic, as many are the fixtures and fittings in churches or monasteries, such as vast retablos or his masterpieces: the choir stalls and the archbishop’s throne in the Toledo Cathedral, and the marble tomb of Cardinal Juan Pardo de Tavera in the Hospital de San Juan Bautista.

The exhibition is the culmination of three years of hard work. Curator and head of sculpture and decorative arts at Washington’s National Gallery of Art (NGA),  C.D. Dickerson III co-curated the exhibition with Mark McDonald, The Metropolitan Museum of Art’s curator of prints and drawings. Berruguete expert Manuel Arias Martínez, head of collections and deputy director of the National Museum of Sculpture in Valladolid, was instrumental in helping to organize the exhibition.

Many of the exhibits are loans from the largest collection of Berruguete’s art at the National Museum of Sculpture in Valladolid. Valladolid and Toledo are the best places to see Berruguete’s work in Spain, according to the exhibition catalog “Alonso Berruguete: First Sculptor of Renaissance Spain.” Edited by Dickerson and McDonald, the catalog is the first comprehensive publication on Berruguete in English.

In Washington, the NGA ran the exhibition from Oct. 13, 2019, through Feb. 17, 2020. The exhibition was due to open next at the Meadows Museum in Dallas. However, at the time of this printing, it has been postponed due to COVID-19; the curators hope to hold the exhibition later this year. Mellon Curatorial Fellow, Wendy Sepponen curated the Meadows exhibition.

“I hope our audiences are inspired by the beauty of Berruguete’s work in a way that encourages them to reflect on what unites us as a people regardless of time, creed, or country. Art made over 500 years ago can speak profound truths to us today,” said Meadows Museum curator Amanda W. Dotseth in an email.

The Making of a Master Sculptor

Little is known of Berruguete’s early life. His father, Pedro, was an accomplished painter, painting in the Hispano-Flemish style popular in the Castile region of Spain, and it’s assumed that Pedro taught his son all he knew. Pedro’s paintings had a definite Italian influence, although scholars are divided as to whether he actually traveled to Italy.

A few years after his father died, Berruguete traveled to Italy (circa 1506), where he spent around a decade studying and honing his art, first in Rome and then Florence.

Italy must have been an artistic idyll for Berruguete. He studied the art of his contemporaries such as Michelangelo and those of the recent past, the early Renaissance masters: Masaccio and Donatello. He also studied the art of ancient Rome, which was continually being excavated. He also learned disegno, the Italian way of drawing by fully envisioning a concept and realizing it on paper.

In Florence, like many great artists, Berruguete traveled to the Brancacci Chapel to study Masaccio’s fresco cycle. It was on those chapel walls that Masaccio moved away from the predominant international Gothic style of elegant, almost two-dimensional figures to paint solid figures that were full of dynamism, movement, and expressive gestures. In the fresco cycle, Masaccio used single-point perspective with mathematical precision and created a depth of field with atmospheric perspective, making the foreground darker than the distance.

Michelangelo, known for fiercely protecting his designs, allowed Berruguete to study his highly lauded (but now lost) preparatory drawing for the “Battle of Cascina.” We know from copies that the drawing depicted a number of Michelangelo’s characteristically muscular figures bathing in a river and caught in a surprise attack. Some men are grabbing armor, others scramble up the bank, and others are getting ready to attack.

Art historian Giorgio Vasari recounts that Berruguete took part in a competition, judged by Raphael, held by the pope’s architect Donato Bramante around 1510. Sculptors were tasked with using clay or wax to sculpt the missing arms of the ancient Roman marble sculpture “Laocoön and His Sons.” The marble sculpture, excavated in Rome in 1506, was thought to have been highly praised by the ancient writer Pliny the Elder. The sculpture presents three tortuous figures firmly in the battle of life and death as snakes wrestle with them.

Over the decade when Berruguete was in Italy, he made his mark as a painter, receiving commissions. “Salome” (circa 1514–1517) is one of those paintings, which is now in Florence’s Uffizi Galleries. “The several paintings that survive from his years in Italy, such as ‘Salome,’ show that—together with Andrea del Sarto, Jacopo Pontormo, and other leading painters—he was at the vanguard of the artistic movement called mannerism,” Dickerson notes in the exhibition catalog. The mannerist movement is defined from circa 1520 to circa 1610. But for Berruguete, painting was just the beginning of his artistic brilliance.

“During Berruguete’s lifetime, much of Northern Europe and parts of Italy were under the Spanish crown,” Meadows Museum curator Amanda W. Dotseth said.

Berruguete returned to Spain in 1518—just two years after Charles I became king of Spain and a year before he became Holy Roman Emperor Charles V—and was appointed painter to the king.

Although Berruguete was known as an accomplished painter and draftsman (he was the first Spanish artist to create a recognizable collection of drawings), it is his sculpture he’s most famous for.

Before Berruguete, the overriding style of Spanish sculpture was of staid, fixed figures full of spiritual meaning yet lacking any movement or dramatic emotion. Berruguete brought together all he’d learned in Italy, imbuing the spirit of the Italian Renaissance into a new style of art.

“Berruguete’s brilliance lay in his understanding that no matter how strongly he admired Michelangelo or the other great masters of the Italian Renaissance, he still had to forge a style of art that accommodated local tastes and local traditions. In other words: to create an art that was distinctly Spanish,” said Dickerson on the audio recording of the NGA press preview of the exhibition.

Berruguete moved from painting as his main medium to the traditional Spanish retablo, which combined painting, sculpture, and architecture in each piece, often requiring complex draftsmanship. And altarpiece commissions were more lucrative.

Berruguete would have worked on an altarpiece such as the retablo for St. Benedict the Royal in his workshop, with many assistants carrying out the work. It is assumed that he designed and oversaw all the work, but it’s hard to determine which works were carved or painted by his hand.

In Spain, wood was the main material for sculpture. Alabaster, although available, was normally only affordable by the queen. Block carving was traditionally used, where the artist carved from one piece of wood. The woodcarver may have thought of wood as Michelangelo felt about marble: “The sculpture is already complete within the marble block, before I start my work. It is already there, I just have to chisel away the superfluous material.”

Yet Berruguete’s finished sculptures were not carved from a single block. He would shape whatever form he required and attach it onto the carving using a dowel and glue—a popular technique in Florence.

The Old Testament prophet Isaiah with his fabulous locks of hair that look like the stylized clouds in Chinese paintings is one example. Isaiah’s beard that seems to billow in the wind coherently follows the cloud theme but is a completely separate carving.

Abraham’s robes in “The Sacrifice of Isaac” is another example of a carving that has been added on. Here, Abraham’s drapery is a stunning example of the special technique known as “estofado,” whereby the carved drapery fabric is gilded and then painted with a thin layer of tempera. When dry, the artist scrapes away areas of tempera to a set design revealing the gold underneath (a technique called “sgraffito” in Italian.) The overall effect imitates brocade.

Sometimes we can clearly see where these add-ons are joined, although Berruguete knew these details wouldn’t be closely scrutinized because the altarpiece was hung up so high. Cleverly, he sometimes used fabric saturated with glue to shortcut drapery carving that seamlessly covered the joints of these carving additions.

On finishing the high altarpiece, Berruguete wrote to a colleague on Nov. 27, 1532: “It is of such perfection that I am enormously content.”

Berruguete was satisfied with these works, but today we can only imagine seeing them in situ, hung up high in the monastery, gently lit by dim but dancing candlelight. Each polychromed wooden figure would’ve glistened and shimmered from its niche, inviting quiet contemplation of the biblical legends they portrayed to all who visited and looked up to God.

To find out more about “Alonso Berruguete: First Sculptor of Renaissance Spain,” at the Meadows Museum, Dallas, visit MeadowsMuseumDallas.org