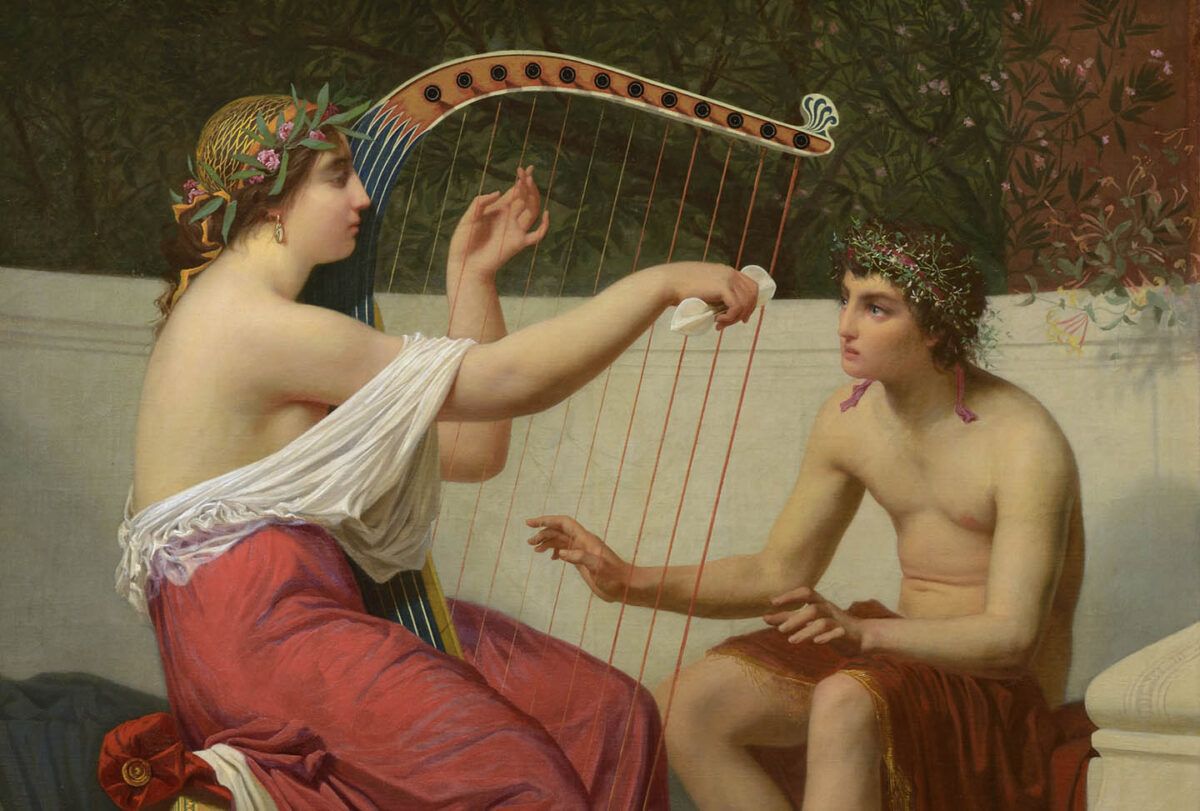 Ancient Greek and Roman mythologies have influenced artists around the world for centuries, and one of the most inspired manifestations is found in 19th-century France.

The art world in France during this century was incredibly diverse, with a number of techniques and subjects finding expression. Among the most enduring styles is academic art. This style was produced within European academies of art; in France, this academy is the famous Académie des Beaux-Arts.

These academies boast a storied history in Europe. Cosimo I de’Medici—famed patron of the Italian Renaissance—established the first academy in Florence in 1563. From the time of the first academy’s inception, mythological subject matter was of central importance, and the Académie des Beaux-Arts oversaw the creation of innumerable classical masterpieces.

Academic art sought to reconcile theoretical branches that artists debated for centuries. The debate centered around whether line and form or color was the most important aspect of a composition. Within European academies, a superlative synthesis emerged. Ancient Greek and Roman myths provided artists with the timeless subject matter required to perfect this style. Mythological themes were a source of both artistic and intellectual developments, as allegories and ideals were of especial importance in academic circles.

The Abduction of Psyche

William-Adolphe Bouguereau’s artworks exemplify the academic mastery of integrating perfect line and color to bring allegorical concepts to life. In recent decades, Bouguereau has rightfully become synonymous with French academicism. His 1895 painting “The Abduction of Psyche” revitalizes an ancient story for contemporary audiences.

Better translated as “The Rapture of Psyche,” the tale comes from the second-century book “Metamorphoses” by Lucius Apuleius Madaurensis. The story is about Psyche and Cupid and the prevailing power of true love. Psyche, born a mortal and a princess, was so beautiful that men stopped worshipping at the Temple of Venus. The jealous goddess commanded that her son, Cupid, pierce Psyche’s heart with an arrow to make her fall in love with a vile, repulsive man. Instead, Cupid shot himself and fell in love with her. After a series of supernatural obstacles, Zeus transformed Psyche into a goddess and she and Cupid were finally united. Bouguereau’s painting captures the moment that Cupid carries his bride away to the heavens; Cupid basks with pride, and Psyche glows with joy and relief.

Bouguereau’s composition is an elegant example of the 19th-century academic style—a style that transcends time and place. The lines and forms are imbued with a dynamism that visually lift the figures toward the heavens, and the vibrant purple cloak connects the lovers. The subtlety of clouds and a landscape in the background support the central plot.

Notably, this is not a beautiful painting devoid of deeper meaning. Bouguereau meditated on the endurance of true love, immortality, and the connection between Love and the Soul. (Cupid symbolizes love, and “psyche” means “soul” in Greek.) The artist reminds his viewers that when love is pure, it will triumph over any obstacle.

Bouguereau reinterpreted another mythic figure in his 1894 painting “Bacchante.” In Greek mythology, the bacchante, also called “maenads,” were the female followers of the god Dionysus (Bacchus in the Roman tradition). Dionysus is the god of wine, festivities, and theater. Bouguereau’s Bacchante appropriately holds a wine vessel and cup, and her leafed crown is reminiscent of grapevines.

Traditionally, the maenads were depicted as frenzied revelers, overcome with euphoria, ecstasy, and excess. Bouguereau, however, dignified his serene figure, and she became an erudite symbol of the more decorous pleasures in life. Undoubtedly, this rendering would appeal to his viewers—the Parisian Salon-goers.

Auguste Alexandre Hirsch similarly utilized Greek myths as a way to celebrate the simple and stately joys in life. His most famous painting, the 1865 masterpiece “Calliope Teaching Orpheus,” is a celebration of music and the everlasting power of the arts. The painting portrays Calliope, the muse of epic poetry, teaching her son Orpheus how to play the lyre; the lyre is the shared symbol of this mother-son duo. Orpheus was regarded as the greatest poet and musician of ancient Greece. His unparalleled singing could tame animals and bring trees and rocks to life. Hirsch hinted at Orpheus’s talent as a small pheasant watches on in the corner of the composition.

Besides the subject matter, Hirsch also relied on his academic training for the way he portrayed his figures. Calliope and Orpheus are naturalistic, idealized figures with skin that almost glows in its sheen and perfection. The matching red cloaks underscore their familial bond. While the pair are engrossed in their activity, the movement does not overwhelm the contemplative painting. French academic artists often drew inspiration from the contemporaneous Romantic style—a style characterized by energy and dynamism. The academics, however, were often more staid in their depiction of activity.

This balance between motion and tranquility is also exhibited in Pierre-Auguste Cot’s 1873 painting, “Springtime.” A student of both Bouguereau and Alexandre Cabanel, Cot’s most notable artwork is an allegorical reflection of youth, first love, and new beginnings. Two young sweethearts share a loving embrace on a swing. They are enveloped in a lush and blooming environment, symbolizing the promises of spring’s arrival and the freshness of new love. The two figures wear classical-style garments, which lends an eternal quality to the scene. This agelessness was an important tenet of academic art, as artists believed that the most important concepts and values were universal and should transcend time and place.

While other movements have occasionally overshadowed the accomplishments of French academic art in the 19th century, new generations of viewers and museum-goers have now begun to appreciate the significance—and beauty—of this style. French academic artists were masters of their discipline, finding innovative ways to synthesize form and color. Their representation of antique mythology was both fresh and classic. As aficionados continue to explore 19th-century French art, the academic movement remains an essential style for viewing.

Dr. Kara Blakley is an independent art historian. She received her Ph.D. in Art History and Theory from the University of Melbourne (Australia) and previously studied and taught in China and Germany.