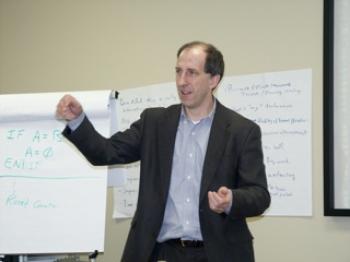 ALAN WILLET: The metaphor that has shaped his career is that of building bridges, getting people together to work as a creative team. (Photo by John Hetzler)
Life & Tradition

The next town was Nunda, three miles away, where everybody attended school.

The nearest major town with stoplights was Geneseo, 20 miles away, with a McDonald’s and a college.

Rochester, New York, was 60 miles away.

Alan’s place of origin was a holistic world. The farm was the hub. Everybody knew everybody and all who came there came to see Fritz Willet, Alan’s father.

He was always working. When Barber Conable wanted to talk with him, Fritz said to the state senator, “Sure we can talk, but I have to get the plowing done. Hop on the tractor with me.” Whether a person was of high or low status, Fritz was focused on his work. He was the same when a person out of work came to see him.

Alan says, “At the farm, opposites collapsed—work and play, loss and gain.”

His earliest memory is the smell of the dairy farm, and even now, when he smells cows, he is back where he was born.

On a winter day in January when Alan (the sixth child) was born, his mother, Dottie, took the day off. The next day, she returned to the barn where his father was busy working. She brought day-old Alan to the barn so that she could care for the baby cows.

He says, “As soon as I could walk I was right there with her, feeding calves milk.

“Work was play, and play was work. A great example of this was baling hay in the summer. My three brothers and I would work on unloading wagons of hay as a game. We would see who could unload a wagon fastest.

“We were strong. I could take a bale and throw it up into the loft, and for us there was no difference between work and play. After we emptied our cart, we would drink lemonade and play a couple of games of ping-pong. Then we would do another load of hay.”

Now, for Alan Willet, 50, one of the topmost software engineers of the world, his work is no different from the holistic world of the Willet Farm.

The metaphor that has shaped his career is that of building bridges, getting people together to work as a creative team.

He was a good student at school, and Fritz and Dottie wanted him to go to college.

The school at Nunda had given his parents a complete education. A generation later, the same school gave Alan as thorough an educational background. He did well at college and his career took off.

Alan met his wife Pamela as his interviewee. In the middle of the interview, they both became silent. They were each thinking the same thought: “This is the one.”

“That evening, unknown to each other, we each called home and told our mothers, ‘I have met the one,’” he says.

On their first date, Pamela said, “I want to home school our kids.” There was no argument, no protracted back and forth; they were in complete agreement.

The two moved to Rochester, and after living there for 10 years, Pamela did not know that their neighbors had children until the day of the block party.

Alan and Pamela looked at each other, and each imagined cohousing as a way of life—of living in community and sharing their imagined life. That is how they found EcoVillage at Ithaca.

Alan speaks of the choice he made to move away from Hunt. He says, “Loss and gain is a two-edged sword. Loss and gain are a driving force in my life.”

Some images from the Willet Farm still surface for Alan as they raise their three children at EcoVillage. He says, “There’s one memory I forever cherish from my farm years. I am woken up at 3:00 a.m. on Christmas morning. My brother Carl woke me up and said there is a cow that needs help giving birth.

“I was not happy being woken up, but I bundled up in my winter clothes and trudged out into the snow. The mom cow did need help, but it was an easy birth. Afterward my brother and I just sat there in silence. We watched the cow clean off her new baby with her tongue.

“We watched out the open barn door a full moon rise over the new-fallen snow. It sparkled. After sitting for a long time, a bit of sun started to show. We got up and started our work day.”