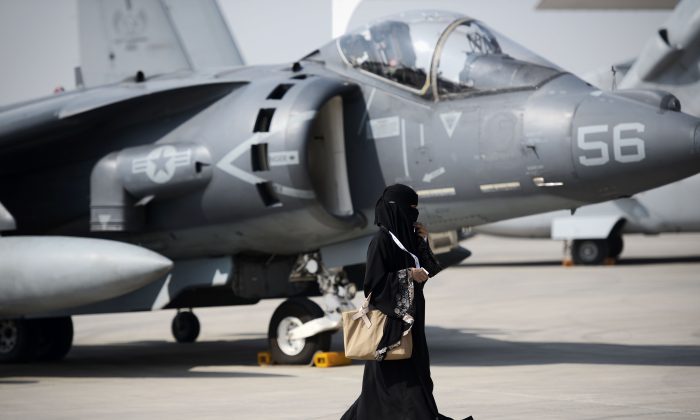 A Saudi woman walks past a US airplane during the opening of the Bahrain International Airshow on January 21, 2016.(MOHAMMED AL-SHAIKH/AFP/Getty Images)
HK Life

The flight from Brunei, a predominantly Islamic country in Southeast Asia, to Saudi Arabia was piloted by captain Sharifah Czarena, the first ever female captain in Royal Brunei Airlines, according to the Brunei Times.

The flight from Brunei to Jeddah commemorated the 32nd anniversary of Brunei’s independence from Great Britain.

In 2012, the airline boasted that Sharifah Czarena was the first female captain in the entire region, not just Brunei.

“As a woman, a Bruneian woman, it is such a great achievement,” Czarena said. “It’s really showing the younger generation or the girls especially that whatever they dream of, they can achieve it.”

The all-female crew landing in Saudi Arabia threw the country’s stringent measures against female drivers into sharp relief. In 2014, a women’s rights activist was arrested at the border after trying to drive from the United Arab Emirates into Saudi Arabia.

Who says Engineering is a men’s only profession? Join our league of expert aircraft engineers through our Engineering Apprentice programme Visit flyroyalbrunei.com for more information on how to apply. Applications open for both boys and girls! #Brunei #RBbetterfly #RBPOV #engineers

Saudi Arabia is the only country in the world where women are barred from driving, at a tremendous cost to the economy. In 2002, author Thomas Friedman said that the country employs over 500,000 foreign chauffeurs to drive women around.