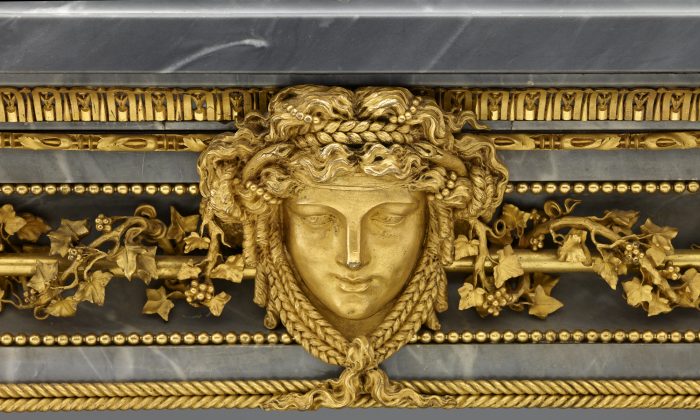 'Pierre Gouthière: Virtuoso Gilder at the French Court' exhibition at The Frick
By Milene Fernandez

NEW YORK—If objects could speak, those made by Pierre Gouthière (1732–1813) would continue to whisper the incredulous wonder at creation. The 18th-century French master chaser-gilder could make bronze look as ephemeral as fire, as delicate as rose petals, and as textured as camel hair. Candle wax probably never dripped on the candelabras he made. Most of his utilitarian objects—vases, clocks, wall lights, and doorknobs—were the ultimate conversation pieces, to be admired.

Whenever Gouthière would finish a new piece, there was a buzz of excitement in the air. The press would report on it; advertisers would publicize it. The public would rush to see his latest piece for a short window of time before the sublime decorative objects would be whisked away for the pleasure of the king and his court.

That buzz still echoes today. The Frick Collection has opened a window into 18th-century French high taste through Gouthière’s creative genius. The exhibition, Pierre Gouthière: Virtuoso Gilder at the French Court, is on view along with a series of programs through Feb. 19, 2017. All of the collectors approached for this exhibition were excited to lend their pieces, said Frick curator of decorative arts Charlotte Vignon.

The craftsmanship of chasing and gilding is a lengthy and complicated procedure (watch video below). First, Gouthière would create molds from an architect’s drawn designs. After the molds were cast, he would hammer the surface of the metal to create all of the textures, and then he would gild them.

Working like a sculptor and jeweler, Gouthière’s chasing and gilding skills were so high that his pieces sold at prices equal to, or higher than, paintings and sculptures by his contemporaries, like Jean-Honoré Fragonard, François Boucher, and Étienne Maurice Falconet. Auction houses would always mention Gouthière’s name when selling his neoclassical pieces—rarely the case for other decorative artists.

The neoclassical style of 18th-century France, imbuing analytical restraint and moral clarity, can come across as rather cold. Gouthière’s pieces, in contrast, are infused with warmth and vitality.

The naturalism in the leaves of his wall lamps, for example, is incredible. The leaves are so thin and full of life that they almost look like they had been dipped into gold, but Gouthière actually worked countless hours modeling, casting, chasing, and gilding to transform the metal into something that looks so fresh and lively, Vignon said at the opening.

Gouthière was famous for creating unique solutions for attaching the gilded bronze to alabaster, marble, granite, and porcelain, for each of his pieces. The capital for a porphyry column that Gouthière interpreted after a design by the architect François-Joseph Bélanger (circa 1775–1780) has about 48 nuts holding it together from the inside—invisible to the eye.

Notably, the column is one of several objects Louis XVI specifically purchased from the late duke of Aumont’s collection for the future “Musée” (now the Louvre Museum), which opened in 1793 and still owns the capital.

Certainly, Marie Antoinette never poured water out of any of the vases for which Gouthière created their mounts, attached so seamlessly. One of the few Gouthière objects that was actually used for its intended function was a window knob. He created it in 1770 after a design by the architect Claude-Nicolas Ledoux for the pavilion of Louveciennes, the residence of Madame du Barry, the mistress of Louis XV.

The court painter Élisabeth Vigée Le Brun wrote about her visit to du Barry’s residence: “[The] salon was ravishing. … The chimneypieces, the doors, everything was fashioned in the finest possible way; even the locks could be admired as masterpieces of the goldsmith’s art.”

The Frick’s exhibition includes the original knob, as well as an 11-minute video showing the intricate, step-by-step process of reproducing it by European craftsmen in 2016.

Gouthière’s success in working for such an exclusive clientele was also the cause of his misfortune. He was imprisoned during the French Revolution, and he became bankrupt because both the duke of Aumont and the duchess of Mazarin died without paying him huge sums of money for several commissions.

After his death on June 8, 1813, his pieces were quickly sought after and collected. His fame has not waned since. Art collectors and great art institutions are continually on the lookout for Gouthière pieces.

Because craftsmen have imitated and copied many of Gouthière’s works, it set an enormous challenge for Vignon, who selected the 21 objects for the exhibition from about 300 she had scrutinized.

“We are 100 percent confident that the pieces in the exhibition are Gouthière,” Vignon said.

She details the authentication process in the catalog she co-authored with Christian Baulez, former chief curator of the Musée National du Chateau de Versailles. It is the first major study of Gouthière in over 100 years.

“The only way to really understand an artist is to put the objects that he really made in the same room. … The objects start to talk together,” Vignon said.

The Frick gives us a rare opportunity to fully appreciate Gouthière’s pieces up close (as they are not encased) all in one place, for a relatively short window of time. After this exhibit travels to Paris, to the Musée des Arts Décoratifs from March 15 to June 25, 2017, these objects will be dispersed—possibly never to be seen all together again in person.