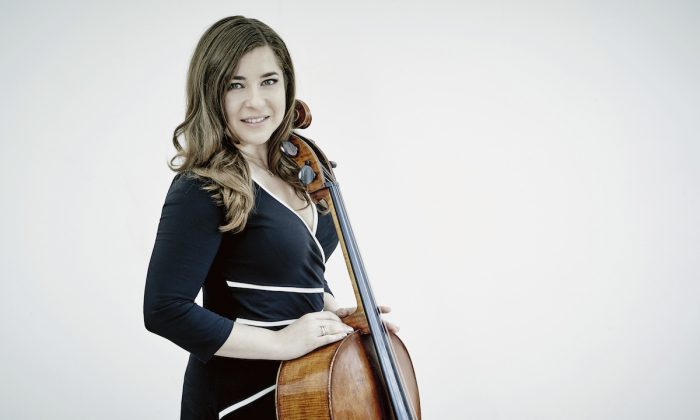 Johann Sebastian Bach’s six cello suites are some of the most popular classical music pieces. The prelude of the first suite has long been among the most recognizable of melodies, frequently used in the background of commercials, films, and so on.

These pieces for unaccompanied cello might have been lost to music history, if young Spanish cellist Pablo Casals hadn’t picked the suites out of a dustbin in the music store he worked in a hundred years ago. Bach had written them for possibly a five-stringed instrument, and Casals transcribed them for the modern cello.

The suites are now a staple of cello repertoire. Yet the widely acclaimed American cellist Alisa Weilerstein had long been hesitant to perform all six suites together.

It is one of the most exhilarating and exhausting experiences.
— Alisa Weilerstein

“Even though I had programmed several of them together many, many times, and I’m very comfortable doing that, the idea of doing them all together was something I found quite intimidating,” Weilerstein said.

The suggestion to play all six suites came from the Southbank Centre in London, and Weilerstein found it “equally exciting and terrifying.”

For Weilerstein, this is music of hidden depths, beginning from the deceptively simple first suite to the symphonic sixth.

She has since performed the full cycle in Washington and at Caramoor in upstate New York, and will perform them in London in February and at the 92Y in New York on April 22.

Weilerstein, who was born into a musical family, said her relationship with the cello began as a toddler—and it was instinctive and absolute. She knew she wanted to play only the cello, though even now she can’t quite pinpoint why the chameleon-like instrument is the one she loves most.

She said her relationship with Bach started evolving before she was conscious of it. She’d started learning the pieces as a child, and it did not take her long to play the first and second suites technically well. By the time she was a teenager, she had learned all the suites, “at least on a superficial level,” Weilerstein said. “I think I realized immediately [that there was more to them], and that was one reason I was hesitant to perform all of them together for a very long time.”

Each suite comprises six movements named after dances of the baroque era and the structure is the same throughout the entire cycle. There is a prelude, an allemande (a German dance), a courante (a 16th-century court dance of short advances and retreats), a sarabande (a stately Spanish dance in triple time), galanteries (two minuets, bourrées, or gavottes, depending on the suite), and a gigue (a lively dance in compound time). There are no interpretive markings from Bach, so it is completely up to the performer. No two versions are quite alike.

The first suite, Weilerstein said, “is the purest, most naked music, really.”

“It is like this pristine diamond, which in a way, you don’t want to mess with,” she said. “But if you’re too afraid of it, it just sounds academic.

“There’s a fine line there between digging in too much and standing off too much, and in a way, in the first suite the balance is the most delicate … to balance this reverence we have for this music, and the need to dig in and to put one’s own stamp on it. To let oneself feel free.

“Because without that, you get this very stiff and timid kind of performance and then the music doesn’t come across at all. That’s a very tricky balance.”

The music of the first and second suites is very sparse, but by the fourth or fifth suites, there is much more harmonic material to work with.

Playing all six suites together is like watching a “rosebud that continues to blossom and blossom into this impossibly beautiful, wonderful thing,” she said. You can see how the structure of the suites evolved: The first suite is the root of all possibilities, and each subsequent suite is another layer of Bach’s endless creativity.

“The allemande from the first suite is this very beautiful and pure thing, and the allemande from the sixth suite is almost free form, like a long improvisation,” she said. “This is Bach pushing boundaries. And as you go through the suites, you see how he started pushing and pushing and developing, until you can’t imagine how he had such richness of invention and creativity. Of course, he was probably the most creative of composers, that we know of.”

“It is one of the most exhilarating and exhausting experiences,” Weilerstein said. And it’s one she hopes to repeat again and again, though she is still hesitant to record them.