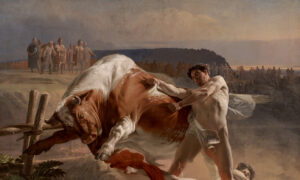 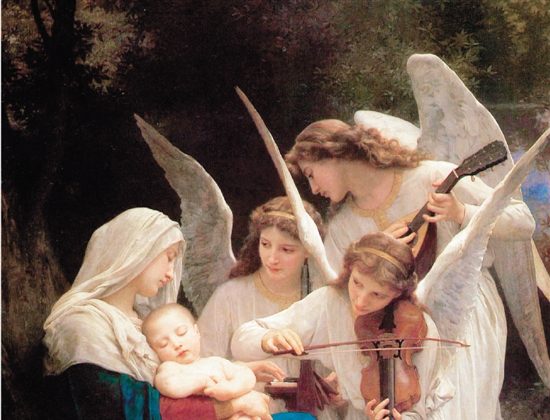 Aligning With the Will of Heaven: ‘The Virgin With Angels’

What is heaven’s will? We may have heard that we should follow the will of heaven, but what does that mean? To me, the question feels a little blasphemous since my human thoughts about heaven might be unintentionally disrespectful to its actual grandeur.

This is not to say that we should not be considering what it means to behave as if we are beings of or on our way to heaven. But I do suggest that the thought should come with a high level of sincere piety and respect.

With that in mind, I was thinking about a painting I’ve seen repeatedly over the past decade or so. William Bouguereau’s “The Virgin With Angels” has caused me to reflect on heaven’s will.

Bouguereau Exhibits at the Salon of 1881

In the early 1880s, Bouguereau’s technical ability to compose and paint pictures catapulted him to the heights of the Parisian art world. He was elected as vice chairman of the Society of French Artists, which was a newly established committee of artists that set the rules for and organized future Salons.

A Salon was the official, annual art exhibition of the Académie des Beaux-Arts in Paris. According to the book “William Bouguereau: His Life and Works” by Damien Bartoli and Frederick C. Ross, the Salon was “the most significant Parisian event of the year.” The first Salon produced by the Society of French Artists was the Salon of 1881 and exhibit Bouguereau’s painting “The Virgin With Angels.”

At the time that Bouguereau painted the religiously themed “The Virgin With Angels,” impressionist painters were gaining popularity, and many of them had a distaste for Bouguereau and his art. An online biography of Bouguereau states that “Degas along with his close connections,” for instance, “coined the term ‘Bouguereauté’ in a deprecating context, to describe any artistic style dependent on smooth and unnatural surfaces,” meaning that impressionists were more interested in expressing nature’s “impressions” on their senses rather than Bouguereau’s pursuit of perfection and idealism.

With that said, Bouguereau maintained popularity with the general public and artistic elite during his lifetime. Bartoli and Ross share art critic Edouard Thierry’s reaction to “The Virgin With Angels” at the Salon of 1881:

“The entire scene is bathed in tenderness. What can I say? Look elsewhere and you will not find such charm as that which springs from the veneration and love of this divine being, in what is most human in such holiness, in what is most simple and most modest.”

“The Virgin With Angels” is a painting that is still popular today. According to Bartoli and Ross, “this astounding religious work singlehandedly broke a number of attendance and popularity records when exhibited in 2006 at the Getty Museum in Malibu, CA.”

‘The Virgin With Angels’

“The Virgin With Angels” depicts the Virgin Mary with baby Jesus at the left of the composition. Mary sits on a bench that appears to be of Corinthian design, which was the most ornate and last design style of classical Greco-Roman architecture. She holds Jesus on her lap, and they both are sound asleep.

The Virgin Mary is dressed in her typical colors of red, white, and blue. The white may represent her purity, the blue her connection to heaven, and the red her love for as well as the sacrifice of her son.

Accompanying the Virgin Mary and Jesus are three angels dressed in white and gold, which, along with their wings, indicates that they are heavenly beings. The three angels look lovingly at the Christ child while they play music for the sleeping pair.

The group of figures is alone in a quiet, natural setting. The Virgin Mary rests her back against a tree, and foliage in the background partly obscures a calm body of water at the upper right of the composition.

We are left with the impression that these angels serenade a sleeping Virgin Mary and baby Jesus in a relaxing, calm, beautiful, earthly setting.

The Celebration and Will of Heaven

So, what does this painting suggest about the will of heaven?

However, the red on her forearms suggests that her love must correspond to what she’s able to sacrifice, that is, what she can give away. She holds on to Jesus now, but at some point, she is destined to let go of the one thing to which she is most attached: her son. Their positioning resembles that of the Pietà, an image in which the Virgin Mary will later hold her lifeless son.

Interestingly enough, the two figures rest upon a bench made in the Greco-Roman architectural style of the Corinthian order, which would have been the last architectural order before the birth of Jesus. The city of Corinth, after which the architectural style is named, would also become a center for early Christianity. The fact that the two rest here suggests the coming change that Jesus will bring to Rome.

Jesus is painted turned toward us, and he is nude, with his hands clasped in front of his chest. This depiction suggests that he has come to earth with nothing: He is presented in his bare truth. Is this also a representation of purity—that our bare truth is separate from our earthly possessions?

But why are they asleep? The body language of the Virgin Mary and Jesus complements the serenity of the natural setting around them. Everything is depicted as serene, calm, and pure. Are the sleeping figures representative of a peaceful and quiet disposition? Are the states of purity and compassion represented by the Virgin Mary and Jesus precursors to this calm serenity?

The angels play music for them while they are asleep. Are the angels celebrating this mother and child who, in their purity, have obtained a calm and serene mind and heart? Or do they represent the will of heaven, which may truly direct our lives only when we stop forcing our own intentions upon our lives and the lives of others (a state also characterized by sleep, since in sleep we do not engage in intentional actions to secure our desires or interfere with the lives of others)? Or both?

This painting has made me consider the importance of a pure mind, body, and heart in obtaining the calm serenity celebrated by heaven. And perhaps this calm serenity is not achieved by intentional force but through sacrificing what we may think is important and instead being guided by the will of heaven. Perhaps, it’s in such calm that we can hear the music of heaven and thus be guided by it.