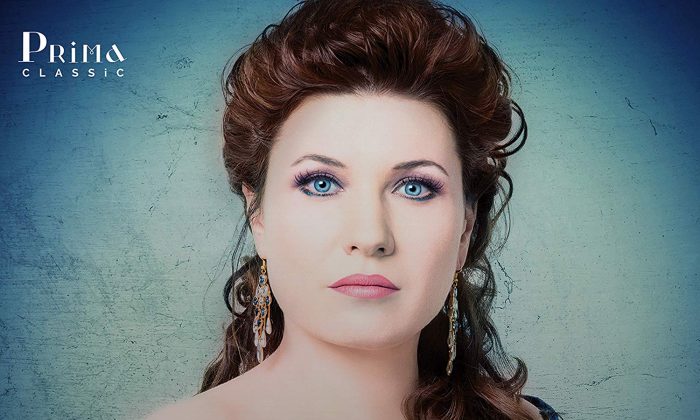 I caught the Latvian soprano Marina Rebeka as Marguerite in Gounod’s “Faust” in Riga in 2017,  and she was Vitellia in the new recording of Mozart’s “La Clemenza di Tito” from Deutsche Grammophon, with Rolando Villazón as Tito. For this solo disc “Spirito,” she is joined by the orchestra and chorus of the Teatro Massimo di Palermo, conducted by Jader Bignamini for a recital of bel canto arias on her own new record label Prima Classic.

Rebeka explains in the booklet note that the program arose partly through her engagement with the music and partly through her fascination for manuscripts, so that the editions created for this program (by Rebeka herself, along with Marija Beate Straujupe, music librarian at Latvian National Opera) are based on the composer’s autographs rather than later traditional versions.

The big advantage of this disc is not so much the editions themselves, as Rebeka’s willingness to think about what is being presented. And that extends to the excerpts themselves, where we have a sequence of scenes, so cavatinas are followed by tempo di mezzos and then by caballetas.

While in modern recitals, there is often a tendency for singers to perform the cavatina as a separate item, it was intended to be part of a large-scale structure not stand alone. That is, in 19th-century Italian opera, a large-scale solo was in sections: first a slower lyrical cavatina, then a more dialogue- like tempo di mezzo to provide a reason for the change of mood, then an up-tempo caballeta full of opportunity for display.

There is a large supporting cast: the chorus of the Teatro Massimo, tenor Marco Ciaponi, baritones Francesco Paolo Vultaggio and Gianluca Margheri, and mezzo-soprano Irene Savignano, who all enable Rebeka to give us scenes with linking dialogues that make the necessary change of mood between cavatina and caballetta.

Rebeka has a remarkably dramatic voice, the sort with an interesting edge to it (in sound quality, it reminds me a little of Montserrat Caballé). This means that all of her accounts on this disc include a dramatic quality that is sometimes missing from coloratura performances. Rebeka’s approach to the music has real bite, yet she is also capable of remarkable delicacy.

Her “Norma” is quite dramatic, and I feel that occasionally Rebeka pushes the voice toward harshness, but the combination of thrilling drama and delicacy is engaging, and there is a fine sense of line in “Casta diva.” In Imogene’s mad scene from the final scene of Bellini’s “Il Pirata,” Imogene moves from a nice delicacy of phrasing, through vivid recitative to the vivid dramatic coloratura at the end, and throughout this, Rebeka makes us fully aware of the words too.

The final scene of Donizetti’s “Maria Stuarda” does not include a mad scene, but a prayer, and here the dramatic edge to Rebeka’s singing brings a surprising thrill and intensity to music that can sometimes be soft-grained, yet she gives us some finely floated top notes as well, and ends with a finely spun line. The result is moving, yet with a sense of personality too.

With Donizetti’s “Anna Bolena,” we return to the mad scene. Rebeka sings much of the scene with a lovely clear tone, giving her Anna a sense of innocent naiveté, yet ending with real dramatic coloratura.

For the final selection, we move to a different country. While Spontini’s “La Vestale” has become known through its 20th-century revivals in Italian (notably with Maria Callas as Julia), here we have the original French, sung with some care by Rebeka. She changes her style to suit the music, and we have a lovely supple line, long and flexible, yet with thrilling intensity too. After listening to this, I was very much reminded that Bellini admired Spontini greatly.

The four singers provide a nice element of drama in the recitatives, and Rebeka is well-supported by Jader Bignamini and the Teatro Massimo forces. The chorus sings lustily in the excerpt from “Norma,” and Bignamini and the orchestra provide dramatic and supple support.

I enjoyed this disc immensely, and it shows that this type of disc can be about far more than simply the personality of the singer. Here, Marina Rebeka gives us some real drama.