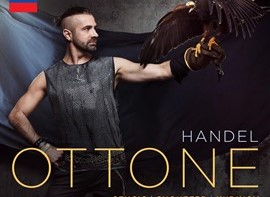 An overlooked operatic masterpiece by Handel
By Barry Bassis
Print

Is there any classical composer who wrote as many forgotten operas that merit rediscovery than George Frideric Handel (1685–1759)? It is unlikely.

The composer, best known for “The Messiah” oratorio and the orchestral pieces “The Music for the Royal Fireworks” and “Water Music,” wrote more than 40 operas.

Although Handel was born in Germany, his operas are all in Italian and the vast majority were written for the London stage. Despite these incongruities, his works were highly popular during his lifetime, especially “Ottone,” which benefits from a stellar performance on a three-CD set from Decca.

There are few recordings of “Ottone,” and this is the first in more than 20 years.

Probably the best-known aspect of “Ottone,” which had its premiere in 1723, is the off-stage conflict between Handel and his temperamental diva, Francesca Cuzzoni. She threw a fit because she didn’t think her entrance aria was flashy enough. The composer responded in kind: He called her a she-devil but declared himself Beelzebub and threatened to throw her out of the window.

If nothing in the opera quite reaches that level of excitement, it is certainly filled with gorgeous music and is performed with zest and virtuosity by the cast and period instruments orchestra Il Pomo D’Oro, under the baton of George Petrou.

The inspiration for the opera was the marriage in 972 of Otto II, or Ottone, the king of Germany and future Holy Roman Emperor, to the daughter of the Byzantine emperor. The rest of the fanciful plot, which was used in an earlier opera by Antonio Lotti, is made up.

The action takes place in and around Rome. Ottone is engaged to Princess Teofane, but he is busy fighting pirates. Meanwhile, Gismonda, widow of the tyrant of Italy, wants to install her son Adelberto as ruler.

Gismonda comes up with a plan: Since Teofane has never met her fiancé, Adelberto can pretend to be Ottone, and Gismonda will pretend to be Ottone’s mother. The couple meet, and (as still occurs today with internet dating) the young woman is disappointed that her betrothed doesn’t look as good as his portrait.

Matilda is Ottone’s cousin and also happens to be engaged to Adelberto. She is not happy about recent events and warns Ottone about the planned power grab by Gismonda and her son.

The marriage ceremony is about to begin when it is announced that Ottone and his troops are at the city’s gates. As Adelberto goes off to fight, Teofane figures out that she has been tricked. Ottone proves he is the better man by defeating (but not killing) his attempted usurper in combat.

Despite all that has happened, Matilda still carries a torch for Adelberto. She pleads with Ottone to spare his life, but Teofane, watching from a distance, misinterprets their familial embraces as a love affair.

Adelberto and the captured leader of the pirates, Emireno, manage to escape. For some reason, Matilda helps Adelberto to kidnap Teofane. While this seems to further Adelberto’s political aspirations, it foils Matilda’s romantic plans.

The pirate Emireno learns that Teofane is his sister and reveals to her that he is her sibling and the true heir to the throne of Constantinople. They ultimately arrive in Rome with Adelberto in chains.

At this point, Matilda experiences another mood swing and decides to stab Adelberto to death. Gismonda grabs the dagger and attempts her own suicide.

The loony happy ending has the two couples reunited—Ottone with Teofane and Matilda with Adelberto. Even the pirate Emireno and the ambitious mother Gismonda are forgiven for their wrongdoings.

Though the parts of Ottone and Adelberto were written for castrato tenors, Decca has cast two leading countertenors: Max Emanuel Cencic as Ottone and Xavier Sabata as Adelberto. (They are both members of the superstar group The Five Countertenors.)

Snouffer’s sublime rendition of “Falsa imagine,” in which Teofane expresses her disappointment that Adelberto doesn’t look like the painting of Ottone, proves that Handel was right in sticking to his guns and keeping in Teofane’s aria despite his original diva’s objections.

The recording would be worth picking up just for the orchestral playing by Il Pomo d’Oro.

As a bonus, the set contains three arias Handel composed for the 1726 revival of the opera.

The Metropolitan Opera has been slowly adding Handel operas to its repertoire. This set confirms that “Ottone” is another it should consider adding.