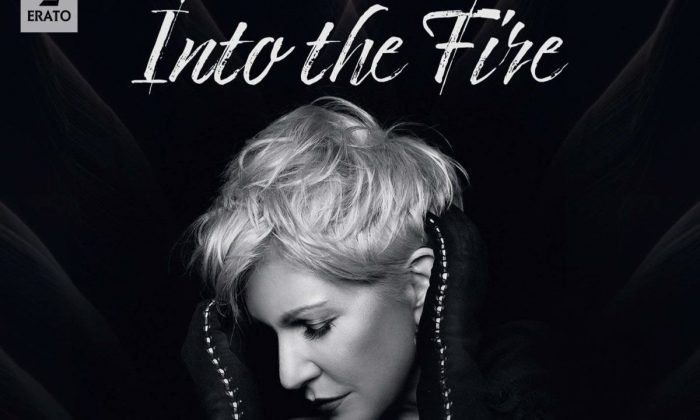 Album Review:  ‘Into the Fire’

“Into the Fire” (on Erato) is a live recording of a memorable concert of art songs at London’s Wigmore Hall by mezzo-soprano Joyce DiDonato with the Brentano Quartet.

The central work, from which the album title was taken, is a song cycle by Jake Heggie, written especially for the singer. Preceding it on the album are songs by earlier composers, dealing with similar themes of romance and despair.

The liner notes start with DiDonato making a statement about the works, followed by a scholarly essay about the songs by English music scholar Michael Downes.

The opening five songs are by Richard Strauss (1864–1949), who composed many songs in addition to significant orchestral works (such as “Also sprach Zarathustra”) and operas (for example, “Der Rosenkavalier”).

“Du meines herzens krönelein,” Op. 21, No. 2 (“You, my heart’s content”) rapturously describes the beauty of the woman he loves, comparing her to flowers in the forest; and “All mein’ Gedanken,” Op. 21, No. 1 (“All my thoughts, my heart and mind”) is another melodic expression of love.

In “Die nacht,” Op. 10, No. 3, (“The night”), the mood turns gloomier as the night takes away all the forest’s beauty and he fears it will also end her love for him.

“Ach lieb, ich muss nun scheiden” Op. 21, No. 3 (“Ah my love, I must now leave”) describes all of nature mourning and failing to understand the separation of the romantic pair. In “Traum durch die Dämmerung” Op. 29 No. 1 (“Dream in the Twilight”), he is on a journey back to the land of love.

Between the Strauss songs and the Debussy cycle is an instrumental, the “Molto adagio sempre cantante doloroso,” quite a lovely work by Guillaume Lekeu (1870–1894). The Belgian composer was highly gifted, but he was only 24 when he died of typhoid fever. The title was inspired by a quote from Matthew’s Gospel.

‘Camille Claudel: Into the Fire’

Jake Heggie’s “Camille Claudel: Into the Fire” is a 2012 song cycle with words by Gene Scheer.

As DiDonato explains in the liner notes, Claudel (1864–1943) was a great sculptor, who was unappreciated at the time and spent her last years in an insane asylum.

The song cycle begins with two songs about Rodin (the famous sculptor with whom Claudel had a stormy romance). It ends with her abandoned and forgotten.

In “Shakuntala,”she plaintively exclaims that she did not know who she was and thinks of her lost child, and she continues this feeling of loss in “La Petite Châtelaine.”

In “The Gossips,” her mind aches from all the thoughts in her head, while a woman on a bench is crying for an undisclosed reason. “L’Âge mur” is followed by an epilogue in which Claudel is grateful to a friend who visits her in the asylum.

The first encore is Strauss’s most famous song, “Morgen!” Op. 27, No.  4. Then, since the concert took place during the Christmas season, it ended with DiDonato leading a singalong of “Silent Night.”

The singer is at her peak, and this is an exquisite recording and a must for lovers of art songs.