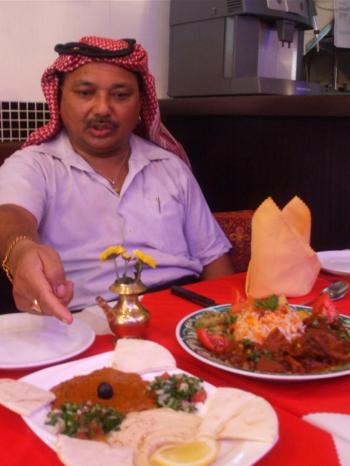 Al Basrah Grill: One of a Kind

BY Oliver Perret TIMEAugust 10, 2010 PRINT
Located on the far west side of Hong Kong Island, Al Basrah Grill is a one-of-a-kind culinary experience.

Mr. Bahadur Shiva, founder of the trendy Soho Dining area in Hong Kong, opened the restaurant only four months ago. From the framed camel-cloth wall hangings to the Arabic-style teapot and the dishes on offer, everything is a cultural experience.

If it wasn't for the Chinese metropolis visible outside, one might well be in a quite Arabian village. “I decorated it all myself,” explained Mr. Shiva, a Nepalese man by birth, who worked in Iraq and Saudi Arabia for many years.

Al Basrah is the name of the second most populated city in Iraq and the birthplace of former dictator Saddam Hussein. In fact, Mr. Shiva cooked for Saddam on several occasions. Three dishes on offer–Lamb Quzi, Biryani Chicken and Biryani Laham–are said to have been Saddam's favourites.

Middle-Eastern food uses aromatic herbs and spices, which are mild but unique. Most of the dishes on offer are Middle-Eastern but Argentinean grill and Mango Lassie–an Indian yoghurt drink–are also available. “I found that Argentina has the best beef,” Mr. Shiva revealed. “It's fresh and reasonably priced … .”

For those adventurous fine diners looking for a cultural treat, Al Basrah Grill might well be the “Arabian night” you're after. A taste of the Middle East, in a city where East meets West.