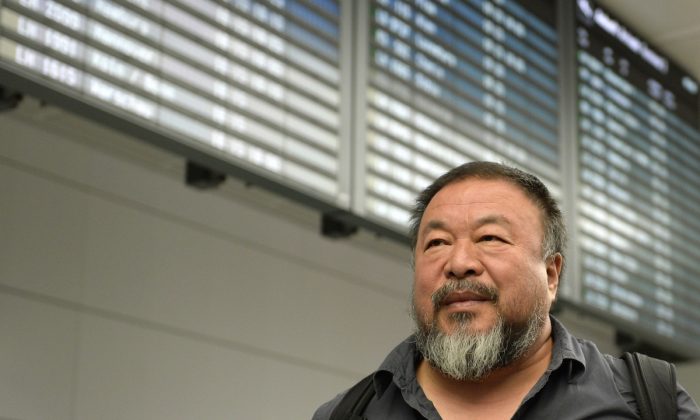 Chinese artist Ai Weiwei gives an interview as he leaves the Franz-Josef-Strauss airport in Munich, southern Germany, after his arrival from China on July 30, 2015. (Christof (Stache/AFP/Getty Images)
Arts & Culture

BEIJING—Chinese artist Ai Weiwei said Wednesday that a change in policy by Lego to allow bulk orders of its toy bricks for projects with a political purpose is a victory for freedom of expression.

The Lego Group last year refused a bulk order for the toy bricks for an exhibition of Ai’s in Melbourne, Australia. Ai called that move “an act of censorship and discrimination,” but Lego said it had a decades-old policy of not endorsing the use of its bricks in projects with a “political agenda.”

On Tuesday, Lego announced that it would no longer ask what the “thematic purpose” of a project is. Instead, customers who intend to display their creations in public will be asked to make clear that Lego does not support or endorse them.

Asked whether it was in response to Ai’s case, the toy-maker said it had been asked whether it supports human rights and freedom of expression. In an email, spokesman Roar Rude Trangbaek wrote: “We always have and continue to do — this is at the heart of what Lego play is all about. … We hope the new guidelines will make it more clear what we stand for.”

Ai’s supporters had donated Lego bricks to him in various countries, and the artist said discussions online about Lego’s refusal to sell bricks for the Melbourne artwork had pressured the company. He said the new policy was a “good move,” and that he now planned to order lots of Legos.

“Lego is a language which everybody can appreciate and should be able to use it according to their will, and that’s what all freedom of expression is about,” the artist said by phone from Germany.

The Melbourne exhibition, which opened in December, was to feature 20 portraits of Australian pro-freedom figures made from Lego bricks. Instead, it used similar bricks from a Chinese company, Ai said.

“I couldn’t tell much difference and the price is much, much lower,” he added.

Ai had previously used genuine Lego bricks to form the portraits of political prisoners and political exiles in a 2014 exhibition at the former island prison of Alcatraz in the San Francisco Bay. Lego had raised no objection then, Ai said.