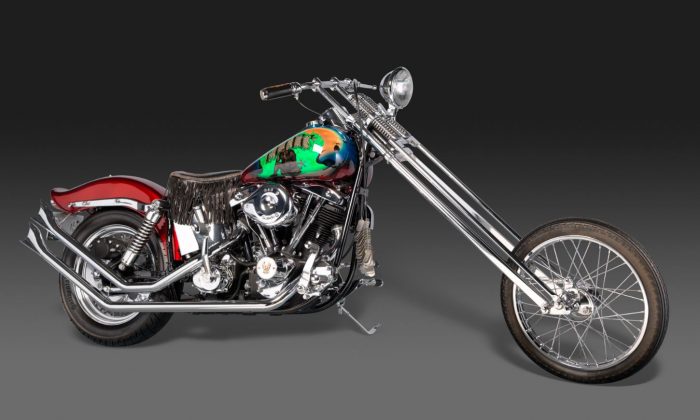 Year after year, there are veterans who make a pilgrimage to the Vietnam Veterans Memorial in Washington, D.C., a black wall with white names of the fallen inscribed into stone. Since the 250-foot long memorial was unveiled in 1982, people have been placing items at the base of the wall to express their grief and gratitude. Out of the over 400,000 things that have been put there over the years, perhaps the painted custom motorbike gets the most attention.

A group of 160 bikers had left it at the wall one day in 1995, and started guarding it around the clock.

In 1968, Robert Thompson came home to Michigan from his tour with the Marines in Vietnam and took up biking. He picked up the nickname “Hogman,” and became a member of the motorcycle safety and rights organization ABATE. It was the organization that caused him to lead yearly rides to the memorial in Washington.

In front of the black granite stone, with mementos placed carefully beneath the names, Thompson wanted to leave something too.

“I started thinking maybe we should leave something from Wisconsin. Since we all ride motorcycles, I thought, let’s build a motorcycle to leave there,” Thompson told Vietnam magazine.

There were 37 soldiers who went missing in action in Vietnam, and the bikers wanted to honor them. Thompson took the idea to Willie Kiefert of Willie’s R&R Service, and their community—not just bikers—decided to custom-build a bike with commemorative details, like the 37 dog tags, or the braided seat.

“We had to kind of build it, take it all apart, then paint it, fit everything … I think it took us a year,” Kiefert told DoD News.

“The seat was never sat on, the seat is for our brothers and sisters on the wall for when they come home, so they’ll have a place to ride with us,” Thompson told DoD News.

They didn’t tell park officials or give any notice that they would be leaving this bike, because they didn’t want anyone to stop them.

“This bike was built for the 58,000-plus people on the wall. This is their bike,” Joe Rutkowski, a Vietnam veteran, told DOD news.

So that morning, Duery Felton, curator of the Vietnam Veterans Memorial Collection, got a call from a park ranger.

“Some fools have left a motorcycle at The Wall,” Felton remembered the ranger saying.

Ultimately, the bike was allowed to stay.

This is a practice that transcends place or time: Humanity has been leaving votive objects—material artifacts made with the intention of being offered as an act of faith—across all historical periods, religions, and culture.

A Culture of Gratitude and Debt

This motorcycle is now on view at the Bard Graduate Center on Manhattan’s Upper West Side as a part of the exhibition Agents of Faith, through Jan. 6, 2019. The collection of items range from third-century Etruscan busts to southeast Asian clay tablets stamped with the image of Buddha, to replicas of limbs offered to saints as supplication for their healing, to letters of grace and gratitude.

It should not be surprising that the practice of votive (or ex-voto, meaning “from the vow”) offering has extended beyond formal religious practice into the secular in modernity, said David Morgan, professor of religious studies at Duke. Morgan gave a talk at a Bard symposium related to the exhibition on Sept. 14, the opening date, via video call.

“Many millions make important pilgrimages every year to important capitals, churches, and shrines,” he said. And in most every case, these pilgrims leave a votive object as “expressions of gratitude, often but not always in fulfillment of a vow.”

Morgan examined the terminology used by those leaving votive objects at shrines and altars compared to, for example, the votive offerings left at the 9/11 memorial sites that spontaneously popped up across the country in the aftermath of the event. We use words like owe, debt, pay, repay, he said. We, as beneficiaries of some sort, speak of what sacrifice, how priceless, how invaluable.

Whether leaving an offering to Saint Mary in supplication as a vow of devotion, or flowers at a memorial to thank veterans for their sacrifice and a promise not to forget, Morgan points out these are both public acts despite their intimate nature.

“Votive display performs a rite of remembrance,” he said.

The ex-voto is microcosmic in its universality.

Objects and images are on loan from all over the world—some from museums and others recovered from storage facilities where the curators were told to “take anything you’d like, it’s not art, it will never be shown in a museum.”

This exhibition includes many objects with inscriptions from the living to the dead, and some are quite personal, giving us a glimpse into the hopes and dreams, and wishes and fears, of people from various millennia and across continents. Some sites see millions of visitors annually, and every little object left there tells a personal story.