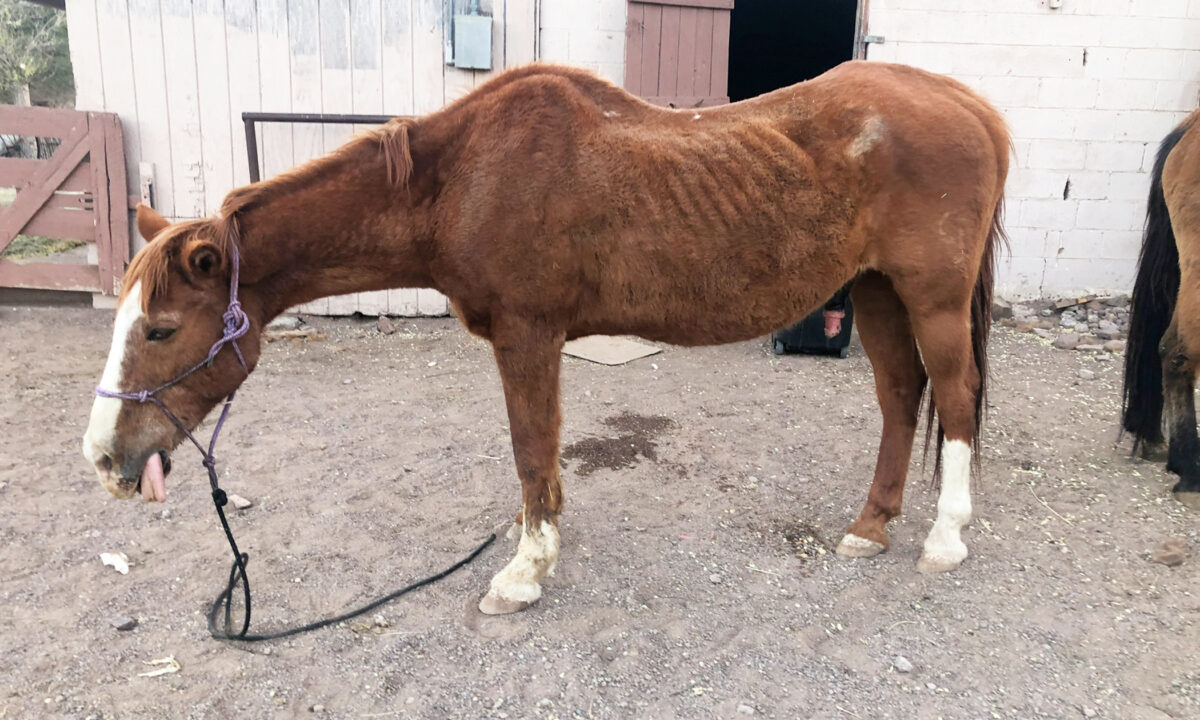 Aged Horse About to Be Sold to Butchers in Mexico Gets Rescued, Thrives With Loving Care

Bud, a used up and aged horse from a dude ranch in West Texas, was about to be sold to butchers in Mexico for his weight in horse meat. One of over fifty work horses kept at the Texas ranch for trail rides and summer camps, his treatment had left him suffering from years of starvation, parasite infestation, and poor dental care, which all led to gastrointestinal damage. Like many aged horses being sold in the same auction, he was emaciated, chronically lame, and had not received proper veterinary care in years.

At the time of auction, Bud’s body score condition was a “1” (generally, the scale ranges from a “1” for emaciation to a “9” for obesity). His skeleton was visible, and he had virtually no fat on his body. His back was severely swayed, and his front legs were nearly unusable.

That’s when he was saved by Christina Hays, the 27-year-old owner and founder of Forever Freedom Reins Equine Rescue Corp., a nonprofit organization based out of Spring, Texas.

“I first heard of Bud through a close friend of mine who had recently been hired at this ranch. She was shocked at the conditions many of the horses were in,” Hays told The Epoch Times.

In 2019, Hays purchased Bud along with seven other horses that were being sold that day. All of them were being offloaded by the dude ranch due to their deterioration and inability to work.

Instead, they found a home at Forever Freedom Reins.

Two of the eight rescued horses did not survive. One of the two was so overworked and starved that it suffered organ failure. The other had advanced joint collapse in both front legs. The remaining six, however, including Bud, recovered royally after receiving big doses of love and extensive medical care.

Bud’s recovery took patience. It took a full year to achieve his medical recuperation. After post-rescue dental work, blood checks to assess his overall health, and radiographs to assess his lameness, he experienced severe episodes of irritable bowel syndrome for roughly a year and was hospitalized and put on IV fluids multiple times for impactions and diarrhea.

Currently, Bud receives routine back and fetlock injections, and daily medication to reduce inflammation and pain. Since Bud had lost all his teeth after improper dental care, he cannot chew hay or hard feed, so he is fed a soaked mash twice daily.

Hays says Bud has gained over 200 pounds since rescue and now experiences little to no lameness, allowing him to gallop pain free in the paddocks. Although Bud is probably overweight, Hays thinks that the old horse deserves it, given the past that he has come from. Now, he’s making up for lost time.

“To this day, he neighs and neighs at mealtime. He is always so excited!” Hays said.

Nearly 30 years old and thriving, Bud’s character shows clearly. Hays describes him as confident, independent and easy going, and able to roam alone or with other horses. Most of his focus is on food, and he spends much of his time alone grazing.

“He is the one you can trust to take care of any rider no matter how small or inexperienced,” Hays said. And then laughing, she added, “Sometimes, he will gently ignore a kid directing him on his back and walk them back to the barn if he thinks it’s dinner time.”

Hays has no plans to let Bud go. She plans to see him through, caring for him for the rest of his life. Bud has found his “forever home,” and Hays has found her “forever horse.”

“Due to his age and GI (gastrointestinal) issues, we felt it was best for him to live out his last days with us,” she said.

Bud now spends his bright days roaming 15 acres of lush green grass with 10 other rescue horses, and his nights are spent in a large padded stall. “He loves his stall, and if he is left out past dark, he stands at the barn gate pushing on it to come in,” Hays said.

Bud’s story is a trotting example of what Hays started her nonprofit to do. She started Freedom Forever Reins when she was a student at Texas A&M University, after stumbling upon two horses that needed rescue: Mystery, a mare abandoned and tied to a tree in Houston, and Boomer, a lame ranch horse being sent to slaughter.

“Both horses opened my eyes to cruelty, neglect, and the brutality of horse slaughter that happens every day yet is so hidden from the public and equestrian world,” she said.

“Since then, it has been my mission to educate and spread awareness on the issues of horse slaughter and cruelty, the responsibilities and commitment of horse ownership, the over-population and over-breeding of horses, and how it contributes to horse slaughter. All while saving as many horses as we can along the way.”

With donations, Forever Freedom Reins saves, rehabilitates, and adopts horses that would not have had a chance otherwise. They specialize in major medical and hospice cases that would otherwise be euthanized or sent to slaughter. “We strive to give these animals the best care available and have saved over 60 horses and counting!” she said.

Horses such as Bud.

These equine souls are the recipients of Hays’s mission and her decision to love, love, and keep on loving—a love that is breathing life back into the almost dead.