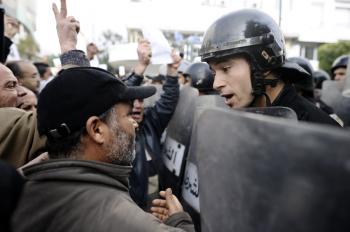 A Tunisian protester talks to a policemen during a demonstration. (Fred Dufour/AFP/Getty Images)
International

Jasper Fakkert
Editor-in-Chief, U.S. Editions
Jasper Fakkert is the Editor-in-chief of the U.S. editions of The Epoch Times. He holds a Bachelor's degree in Communication Science and a Master's degree in Journalism. Twitter: @JasperFakkert
View profile
Follow
biggersmaller
Print
Until a few weeks ago in Tunisia, it was not done: involving yourself in politics. Now, most Tunisians are getting used to the idea. Weeks of protests have overthrown the man who ruled the country for 23 years. But after bitter clashes with police, the sweetness of the Jasmine Revolution has yet to be tasted, and the country’s future remains ambiguous.

Following the ousting of President Zine El Abidine Ben Ali, Tunisian protesters are now seeking to have his Constitutional Democratic Party (RCD) completely removed from Tunisian politics. In a struggle for survival, the party announced on Tuesday that it would expel Ben Ali.

The government’s willingness to accommodate some of the people’s demands shows the chastening effect of the mass protests, given that for the last several decades opposition was strictly put down.

Tunisian Prime Minister Mohammed Ghannouchi and Interim President Foued Mebazaaand announced on Tuesday that they would quit the RCD.

“Clearly the government has to take steps to meet the aspirations of the Tunisian people. Tunisian people are making their views clear in what they want to see,” State Department spokesperson Phillip Crowley said on Tuesday.

But much more is to be done. A temporary government set up in the days after Ben Ali fled the country last week has already started to wobble. On Tuesday four ministers decided to pull out because RCD was overrepresented in the unity government.

“One of the problems is that the interim government contains members of the former ruling party, the RCD, which is not trusted by the people,” says Jim Phillips, senior research fellow for Middle Eastern Affairs at The Heritage Foundation.

Thus, the country is still in a fix. It was clear that Ben Ali had to go, but the opposition has been too disorganized to provide a credible alternative.

Moncef Marzouki, the chairman of the banned Congress for the Republic Party, who returned to Tunisia from exile in France following the unrest, has called for a continuation of the Jasmine Revolution. So has the former leader of the banned Islamist movement Al Nahda, though their positions are also tenuous.

“It is not clear how much popular support some other parties that were forced into exile, such as the Al Nahda Party and the Congress for the Republic, can depend on,” Phillips said.

The upheaval in Tunisia has been watched with a great deal of interest and uncertainty, especially in the United States. “There is hope that the situation can be stabilized to give Tunisians their freedom without further bloodshed, but it is not known if the interim government that has been proposed will be able to govern with the support of the Tunisian people,” Phillips said.

The international community has broadly articulated that it hopes the violence will end, and is willing to assist in the development of democratic processes so that the Tunisian people can elect their own leaders.

“But the U.S. probably does not have much influence in Tunisia, which was a non-aligned authoritarian state,” says Phillips. “Ultimately, it will be up to the Tunisian people to decide the future of Tunisia.”

The Jasmine Revolution, as the uprising has been called, began on Dec. 17 last year when 26-year-old unemployed university graduate Mohamed Bouazizi set himself on fire to protest the police preventing him from selling fruit. That desperate action quickly triggered a cascade of protests against unemployment, in which at least 76 people have been killed.