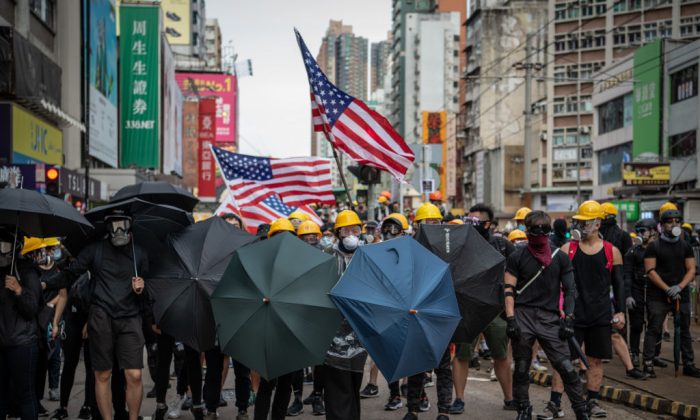 Protesters hold up umbrellas and American flags in the face of advancing riot police in the district of Yuen Long in Hong Kong on July 27, 2019. (Laurel Chor/Getty Images)
US-China Relations

In recent days, U.S. officials have stepped up their support for Hongkongers protesting their government for refusing to scrap a controversial extradition bill that they view as undermining the city’s autonomy.

The reactions came after the Hong Kong and Macau Affairs Office, Beijing’s highest-level agency for managing the city’s affairs, held a rare conference in Beijing on July 29, the first of its kind since 1997, when Hong Kong was transferred from British to Chinese rule.

The latest American official to voice his concerns was U.S. Senator Jim Risch (R-Idaho), who is also chairman of the Foreign Relations Committee.

“I am deeply concerned by the Chinese government’s statements yesterday [July 29] that further demonstrate a complete unwillingness to listen to the Hong Kong people,” Risch said in a July 30 statement.

He added: “In their comments, Chinese government officials cited the importance of upholding the Basic Law–which China has routinely undermined through its growing encroachment on Hong Kong’s autonomy.”

The Basic Law, essentially Hong Kong’s constitution, was drafted as part of a handover treaty signed in 1984, called the Sino-British Joint Declaration. The Basic Law guarantees the city a high degree of autonomy for 50 years after 1997.

Many Hongkongers fear that such autonomy is under threat with the extradition bill, which would allow any country, including mainland China, to seek extradition of criminal suspects. The proposal drew widespread protests, as many worried that it would allow the Chinese Communist Party to extradite dissidents and critics, and subject them to trial in China’s courts, where rule of law is not observed.

Mass protests in Hong Kong are entering its third month since 1.03 million people took to the streets on June 9. After mounting public pressure, Lam announced that the bill would be indefinitely suspended. But people remain unsatisfied and have demanded the bill’s full withdrawal.

In recent weeks, public anger has spilled over to local police, whom locals say have used excessive force to disperse protesters.

Risch stood behind the protesters’ demands: “The Hong Kong people are protesting in pursuit of legitimate rights and freedoms, and they deserve accountability from their government…The Hong Kong government should fully withdraw the extradition bill, and conduct an independent investigation of excessive force by the police.”

Senator Marco Rubio (R-Fla.) also voiced his criticism against China in a video published in his Twitter account on July 29, saying that Beijing has failed to keep promises it made during the handover.

He reiterated an earlier statement, in which he blamed Beijing for instigating a violent mob attack at the Yuen Long metro station on July 21 evening, when a group of men in white t-shirts wielding wooden and metal poles beat up passengers. At least 45 were injured, including local lawmaker Lam Cheuk-ting.

“What kind of government goes out and encourage organized crime gangs to go into the streets, and go on a train station and brutally attack people, some of whom weren’t even protesters, they were bystanders. So this tells us a lot about the Chinese government,” Rubio said in the video.

There is evidence to suggest that these men—some of them have been identified by local police as having triad backgrounds—were organized by pro-Beijing forces. In video footage from that same evening and same area, pro-Beijing lawmaker Junius Ho is seen shaking hands with white-t-shirt men and praising them for their “hard work.”

On July 29, U.S. Secretary of State Mike Pompeo, while speaking at the Economic Club of Washington, urged Beijing to “do the right thing” with regards to guaranteeing Hong Kong’s autonomy.

That same day, Kurt Tong, who recently stepped down as U.S. Consul General to Hong Kong and Macau, gave a keynote address on Hong Kong’s relationship with China at the Washington-based Center for Strategic and International Studies.

He urged Beijing to “dial it back a little bit, in terms of how it approaches Hong Kong affairs, and give it [Hong Kong] the space that it stated that it would in the Sino-British Joint Declaration, or in the Basic Law, and re-establish a little more distance between the rest of China and Hong Kong.”

U.S. Senator Pat Toomey (R-Pa.) also gave his support by releasing a July 30 statement saying he would back a new bill called the Hong Kong Human Rights and Democracy Act, “in support of protesters in Hong Kong who are fighting to preserve their democratic freedoms and independent legal system.”

On June 13, four U.S. senators reintroduced the bill (S.1838) in Congress, which would make Hong Kong’s special trading status contingent on the issuance of an annual certification of Hong Kong’s autonomy by the Secretary of State. A similar bill was introduced back in 2017.

The United States currently treats Hong Kong as a non-sovereign entity that is separate from China on matters of trade and economics. The senators had said passage of Hong Kong’s extradition bill would compel U.S. authorities to reevaluate whether the city would qualify for such status.

In late June, U.S. concerns about Hong Kong were included into the language of the Senate version of an annual defense spending bill, the National Defense Authorization Act (NDAA). It passed on June 27.

“The United States should impose financial sanctions, visa bans, and other punitive economic measures against all individuals or entities violating the fundamental human rights and freedoms of the people of Hong Kong, consistent with United States and international law,” the bill states.

The House has passed its version of the NDAA on July 12, but it does not include the Hong Kong provisions.

The Senate and House will iron out differences between their legislation and then produce a compromise bill.