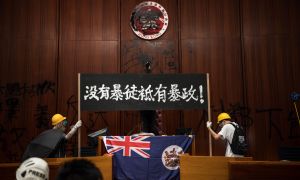 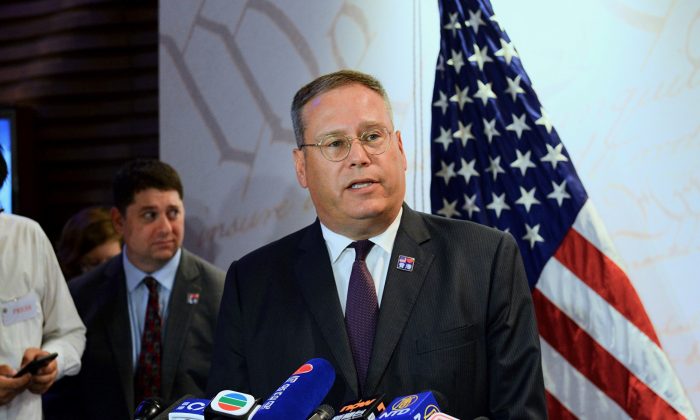 Kurt Tong, the outgoing U.S. Consul General to Hong Kong and Macau, spoke of his concerns about the ongoing protests in Hong Kong, where locals are demanding that the local government scrap a controversial extradition bill.

Tong made the remarks during a reception to celebrate Independence Day at the Hong Kong Ocean Park Marriott Hotel on July 2. He reiterated a comment made by a U.S. State Department spokesperson following violence at the Legislative Council (LegCo) a day earlier.

“The United States urges all sides to refrain from violence. Hong Kong’s success is predicated on the respect for the rule of law and fundamental freedoms, including its freedoms of expression and peaceful assembly,” Tong stated.

On July 1, the 22nd anniversary of Hong Kong’s handover from British to Chinese rule under the Chinese Communist Party (CCP), over half a million people took to the city’s streets to demand the local government withdraw the bill. Many locals are worried that if the bill were to pass, Beijing could potentially pressure the local government to hand over citizens of any nationality to face trial in the Chinese regime’s courts under false pretenses.

The anniversary march has now been overshadowed by a group of young protesters who stormed and vandalized the city’s Legislative Council (LegCo) after forcing their way into the building by shattering glass doors with a metal trolley and poles. The youths did not leave LegCo until around 12:30 a.m. local time on July 2.

Around the same time, police fired multiple rounds of tear gas to disperse the crowds that remained outside LegCo.

The protesters who stormed LegCo have since released a statement to explain their actions. “The current government of the Special Administrative Region [Hong Kong] is no longer what Hong Kongers have envisioned, and the legislature … has become a political tool,” they said.

Tong said that it was precisely because of Hong Kong’s fundamental freedoms that he was optimistic about Hong Kong’s future, as well as the current protest.

He drew on U.S. history—how there had been good intentions behind their conflicts and mistakes made in the lead up to the creation of the U.S. Constitution—to support his positive outlook for the Hong Kong people.

“I believe that Hong Kong has the right ideas and values, and even the right basic structure in ‘one country, two systems’ to succeed and prosper as a society,” Tong stated.

That structure has been in place in Hong Kong since July 1, 1997, when the city’s sovereignty was handed over from Britain to China. While such a constitutional structure is intended to preserve Hong Kong’s autonomy and freedoms under the rule of the CCP, the city has seen the encroaching influence of Beijing impact local politics, education, and freedom of the press in recent years.

When asked whether Hong Kong leader Carrie Lam had done enough to prevent the violence, Tong told local media that he would withhold his comment since he isn’t a Hong Kong citizen. But he added that he felt people should show appreciation for these protesters, since freedom of expression is something important to maintain in Hong Kong.

In terms of the 1992 U.S.-Hong Kong Policy Act, Tong replied that there shouldn’t be any change to this existing legal framework between Hong Kong and the United States. Under the Act, the U.S. government treats Hong Kong as a non-sovereign entity that is separate from China on matters of trade and economics.

“We feel like we have a legitimate voice to express our concerns about issues of politics, or governance or economic policy or the like [in Hong Kong],” Tong said in response to a question about accusations by pro-Beijing parties that he was acting to interfere in Hong Kong’s “internal affairs.”

“We feel like we’re within bounds by expressing ourselves,” Tong stated, adding that the United States is a huge investor in Hong Kong—close to 100,000 U.S. citizens live in the city. Around 1,400 American companies also operate there, employing 100,000 Hong Kongers.

In February, Tong expressed concerns about Beijing’s increasing influence in Hong Kong during a speech to the alumni association of Hong Kong University of Science and Technology’s Kellogg Executive MBA Program.

“A narrowing of Hong Kong’s political and democratic space is likely to adversely impact the city’s marketplace for ideas and innovation,” Tong said at the time, pointing out to Beijing’s policymakers “the risks that ongoing political tightening pose for the realization of Beijing’s own goals for Hong Kong’s contribution to Chinese economic development.”

In March, members of pro-Beijing political party ‘Democratic Alliance for the Betterment and Progress of Hong Kong’ protested outside of the U.S. consulate over Tong’s February remarks, according to local media Hong Kong Free Press.

On July 2, while Tong gave another speech at the Asia Society Hong Kong Center, another pro-Beijing political party, the Hong Kong Federation of Trade Union, also staged a protest, according to Hong Kong radio broadcaster RTHK.

Tong said he is moving back to the United States as his term ends and will take up a position in the private sector. He is to be replaced by Hanscon Smith in July, who was formerly the Consul General in Shanghai.