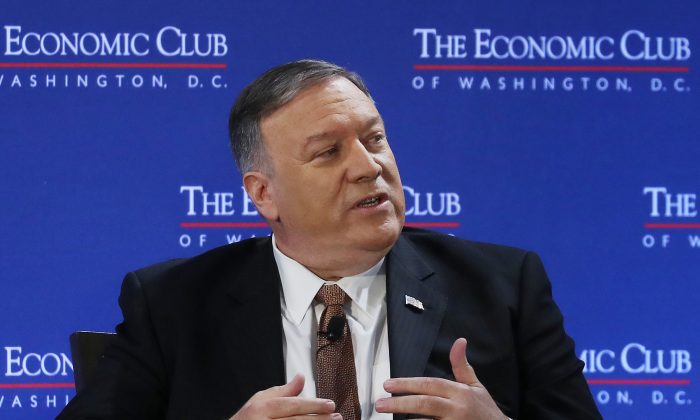 U.S. Secretary of State Mike Pompeo speaks about U.S. diplomatic relations and trade agreements during a discussion hosted by the Economic Club of Washington, in Washington, on July 29, 2019. (Mark Wilson/Getty Images)
US-China Relations

China has blamed the United States for the ongoing unrest in Hong Kong at a press briefing, in response to recent comments made by U.S. Secretary of State Mike Pompeo in support of the protesters.

“Pompeo said the recent violent incidents in Hong Kong are appropriate because, as you all know, they are somehow the work of the U.S.,” China’s Ministry of Foreign Affairs spokesperson Hua Chunying said at a regular press briefing on July 30. She added that Pompeo “obviously fails to put himself in the right position.”

Blaming Western governments for fomenting dissent is a common tactic for Beijing to discredit critics of the Chinese regime.

Hua’s remarks, referring to Pompeo’s comments at the Economic Club of Washington, D.C., was the first time that China directly blamed the United States for Hong Kong’s escalating protests.

Hong Kong citizens have become increasingly vocal in light of what they perceive as China’s creeping intrusion into Hong Kong affairs. In recent months, demonstrations have taken place on a large scale across the city as protesters opposed a Beijing-backed controversial extradition bill that they feared could be used by China to retaliate against dissidents.

Pompeo on July 29 urged China to “do the right thing” and respect the agreement to preserve Hong Kong’s autonomy, made at the time when the former British colony was transferred back to China’s sovereignty in 1997.

“We’ve been pretty clear: protest is appropriate,” Pompeo said. “We always support freedom of expression, freedom to practice one’s religion, to live out one’s conscience. We hope that for every citizen of the world.”

“I think everyone understands the U.S. position,” Pompeo added.

Pompeo also said that he made it a priority to update himself on China matters. “Every morning the first thing I do is read about China,” Pompeo said.

China Tells US Not to ‘Play With Fire’

The July 29 press briefing made no mention of the use of violence by Hong Kong police to clear the crowd—an issue that has alarmed Hongkongers, government officials, and international human rights groups. Tear gas, rubber bullets, and foam grenades used over the weekend protests have led to at least 40 injuries.

Recounting a list of previous incidents where U.S. officials appeared to have shown support for the protesters—such as Vice President Mike Pence, Pompeo, and National Security Advisor John Bolton who have met with pro-democracy advocates in July—the Chinese regime cautioned the United States not to “play with fire” by interfering with China’s internal affairs, repeating a phrase that the regime has used on multiple occasions to criticize other western governments that were sympathetic with the protesters.

“We saw some American faces among the violent demonstrators in Hong Kong. We even saw the U.S. national flag on some occasions. We all have this question: what role has the U.S. played in Hong Kong recently?” Hua said, adding that “the U.S. owes the world an explanation.”

Although the Chinese Communist Party has insisted that Hong Kong is “China’s Hong Kong” and vehemently opposed any country to interfere, Hong Kong democracy activists said that it’s within the right for other governments to step in and voice concern for their nationals living or doing business in the region that is known as a leading international financial hub.

So far, only North Korea has openly supported the Chinese regime’s stance on Hong Kong.