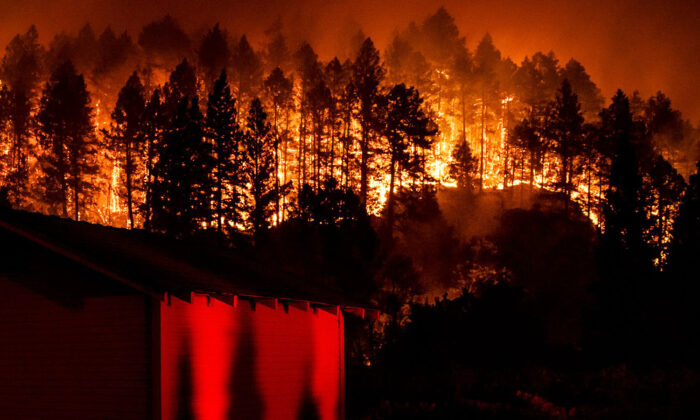 After 60-hr Shift, Firefighter Rushes to Save Girlfriend’s Home From Encroaching Blaze

Most people go home and crash after a double shift working nonstop. But even after fighting the California wildfires for a grueling 60-hour shift, firefighter Grant Newnom rushed to the scene of yet another fire after getting the heart-stopping phone call no one ever wants to hear.

Exhausted and on his way home from battling wildfires, Newnom, with the San Jose Fire Department, received a call from his girlfriend, Elise Jones, who was having Sunday dinner with her parents.

During the call, Jones said that her parents’ home in Santa Rosa was under threat of burning in the blaze.

Newnom and Jones both received an emergency alert on their cell phones, notifying them to evacuate the area immediately.

But the flames were already encroaching on the family home, with Jones and her parents still inside.

“They looked outside and they could actually see the glow,” Newnom told CNN.

Without a second thought, he sprang into action, rushed to the scene, and prepared to defend the Joneses’ home. On the way there, he began recording a video on his cell phone, capturing the devastating fire and the damage that had already been done to the surrounding neighborhood.

“A couple of the neighbor’s houses made it, it looks like some did not make it,” he can be heard saying in the video, published by Inside Edition.

According to CNN, this wildfire would soon be dubbed the “Glass Fire,” and it had already destroyed 80 homes. The fire had a 0 percent containment rate and was highly volatile.

Soon, Newnom arrived on the scene, only to find other firefighters already fighting back the flames.

“Nobody said it,” he said, “but I think that everybody kind of had the thought in their back of the mind of ‘okay well, this is intense right now.’”

Despite the raging inferno, thankfully, the house was saved. Jones and her parents say they are forever grateful.

“There are no words to express our gratefulness to Grant and the crew that saved our home,” Jones’s mom said. “They are definitely heroes.”