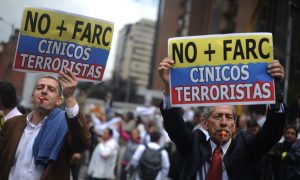 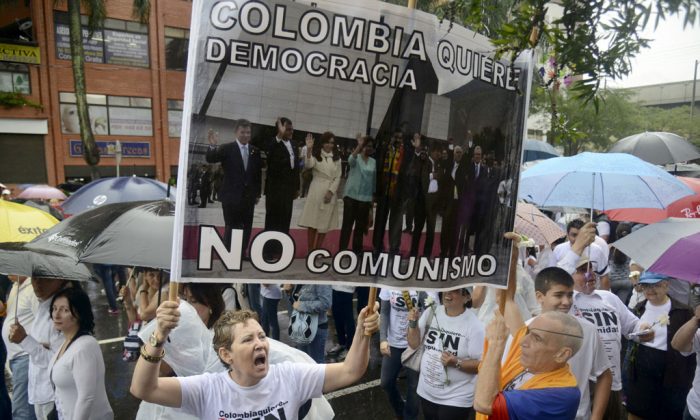 People attend the 'Peace without Impunity' march, against the current peace talks with FARC rebels in Medellin, a sign reads 'Colombia wants democracy, not communism', Antioquia department, on Dec. 13, 2014. Hundreds of people marched Saturday in several cities in Colombia to question the peace negotiations between the government of President Juan Manuel Santos and the FARC guerrillas. (Raul Arboleda/AFP/Getty Images)
Americas

HAVANA—Peace negotiators for Colombia’s largest rebel group announced an indefinite, unilateral ceasefire Wednesday, saying guerrillas will refrain from staging attacks so long as they aren’t targeted by the U.S.-backed military.

The Revolutionary Armed Forces of Colombi (FARC) a made the announcement in Cuba at the end of another round of peace talks aimed at ending Latin America’s oldest insurgency.

In its statement, the FARC expressed the hope that the ceasefire beginning at midnight Dec. 20th would “transform into an armistice,” and said it would seek the support of several Latin American nations and the international Red Cross to verify its enforcement.

Although the FARC have declared temporary ceasefires before, around Christmas and elections, this would be the first time they’ve offered to indefinitely lay down their weapons nationwide since the 1980s.

It remains to be seen whether the government will respond in kind. In two years of talks, President Juan Manuel Santos’ government has steadfastly refused to agree to a two-way truce, fearing the rebels would use the opportunity to rearm as they have in past.

Still, the number of rebel attacks has dwindled notably since 2012, a sign to many analysts that the FARC are negotiating in earnest and an end to a half-century of fighting is within reach.

The two sides have already reached agreements on agrarian reform, political participation for the FARC and how to jointly combat illicit drugs in what was long the world’s largest cocaine producer.

But some of the thorniest issues remain unresolved, including how the FARC will lay down their arms and whether commanders will face prosecution for atrocities and drug trafficking.

Those concerns prompted thousands of Colombians led by powerful former President Alvaro Uribe to march over the weekend in the capital Bogota and other cities to reject a possible amnesty for rebel leaders and demand the government hold them accountable for mass killings, kidnapping and drug trafficking.

Uribe, whose conservative government launched the military offensive credited with pushing the FARC deeper into the jungles, on Wednesday called the guerrillas’ conditioning of its ceasefire on the government’s withholding of its own firepower a form of “blackmail.”

In November, the talks were briefly suspended after the FARC took hostage a Colombian general and two others while traveling in a remote part of the South American country.

From The Associated Press. AP Writer Hannah Dreier contributed to this report from Caracas, Venezuela.