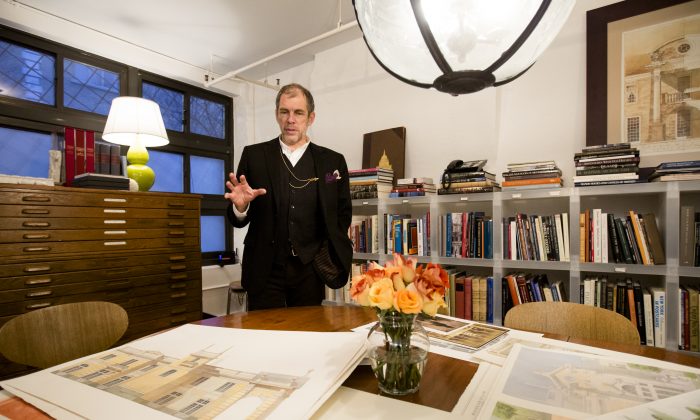 Richard Cameron shares his journey towards classicism
By Milene Fernandez

NEW YORK—When Richard Cameron shows up at a meeting with a portfolio full of handmade drawings, people are almost flabbergasted. The drawings almost take on a magical quality in a world dominated by pixilated images and mass production.

“One of the terrible problems of architecture now is that it is a profession without its core—which is an artistic practice, first and foremost. If architecture is not an art, it is nothing,” Cameron said in his architectural design firm, Atelier & Co. in Williamsburg, Brooklyn.

Cameron co-founded Atelier & Co. with Jason Grimes in 2009 intending to bring artistry back into architecture. They collaborate with architects and artisans to work on a range of projects, from residential to commercial buildings, as well as interiors and preservation projects, like their proposal to restore the original Penn Station designed by Charles McKim.

Looking at any of Atelier & Co.’s drawings immediately awakens one’s imagination. Cameron explained that drawing and painting by hand is the most intimate way to convey a designed space that is yet to become tangible. Each creative consideration can be illustrated in detail. Inevitably Atelier & Co. does use computer-aided design programs (CAD), but only as a tool in service of their handmade drawings.

Inoculated From a Modernist Dogma

“The things that endure had an artistic intent and an artistic value to them because architects where always trained as fine artists,” Cameron said, as he explained why classical architecture is timeless.

Cameron reached that understanding in a circumvented way. The education he received at the University of Toronto was diametrically opposite to what he’s doing now. He has since taught himself draftsmanship and drawing techniques of the 19th century Beaux-Arts School.

As a child he was exposed to plenty of beautiful architecture when his family lived in various parts of Europe: Oxford, England; Budapest, Hungary; and in France. He knew he wanted to become an architect and enjoyed buildings with tradition, but said, “You are taught a kind of ideology that no one ever does that anymore.”

He recalled how the Chair of the Architecture School at the University of Toronto, Peter Prangnell, gave a slide-show presentation to all of the students—”a kind of indoctrination talk,” he called it.

Cameron recalled Prangnell praising modernist iconic buildings like those by Le Corbusier. “At one point he put up a sequence of shots of the main axis of Versailles, which I remember very vividly experiencing as a child. And his line to accompany this was, ‘Have you ever seen anything more boring and predictable than that.’ And I remember thinking, ‘No, that’s not right, that’s one of the most astonishing and dramatic moments in architecture that I have ever experienced,” Cameron said.

Then he recalled Prangnell showing a picture of Chatsworth House. “This was the dramatic moment of the talk, it was like we were taking the pledge of allegiance, and he said, ‘I want you all, every one of you in this room to promise me, you will never, ever do anything that looks remotely like this,’ but I remember thinking, ‘No, I’m not going to promise that, are you kidding?! This is Chatsworth House. It’s amazing; it’s one of the great Baroque masterpieces of the world!” Cameron said.

That education was like “a communist or totalitarian mind control program,” he said. Later the school changed, but he realized at that time (around 1981) it was a more extreme version of what most architecture schools are still fundamentally about today. The students experienced so much stress that some “would literally check out and end up in the psych ward. It was really bad, and we weren’t learning any professional skills at all. There were people who graduated from the program, who really became indoctrinated and still talk like that,” Cameron said.

His childhood memories of beautiful architecture in Europe had in effect protected him from such indoctrination. He was also fortunate to meet his main teacher, mentor, and friend, Michael Djordjevitch who taught him all things classical, and who also works with him at Atelier & Co.

Atelier & Co. often gets involved in the initial stages of a project, in helping people envision how it can be done. That’s partly why the Rebuild Penn Station  project is a natural fit.

In his proposal for rebuilding the original Penn Station, Cameron quoted Henry Hope Reed, “The classical is at once retrospective and ever new. The backward glance transforms and regenerates. Every generation of classical architecture has its own vision of perfection and its own Golden City.”

Atelier & Co. is inspired to approach truth through beauty. Cameron explained, “When you find something beautiful, you love it. … So when you create ugly antagonistic buildings, for instance, you kill love. People may think ugly [contemporary] buildings are interesting, unusual, off-putting, edgy, or whatever else they are, but those buildings are ultimately producing anxiety.”

“I think the majority of people will revert back to the affection for traditional things because those are actually based on thousands of thousands of years of human experimentation in the world of aesthetics,” Cameron said.