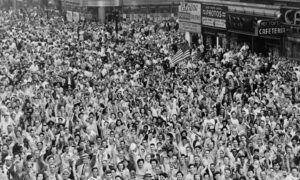 Lest We Forget the Goodness of America
0 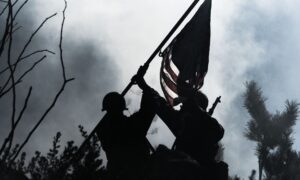 Sacrifice, Courage, Patriotism: A Visit to the National Museum of the Pacific War
0 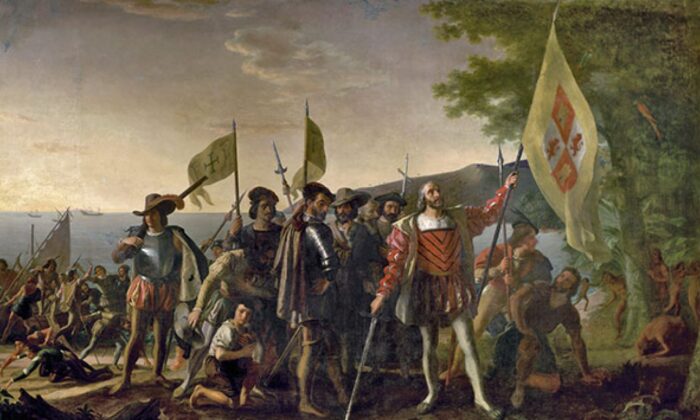 On Oct. 12, 1492, Columbus landed on the island of San Salvador and claimed all of the New World for Spain. “Landing of Columbus,” 1847, by John Vanderlyn. Capitol Rotunda. (Public Domain)
Traditional Culture

Admiral of the Seas: The History and Mystery of Christopher Columbus

When I was a boy living in Boonville, North Carolina, population then about 600, I loved reading histories and biographies written for kids and would then entice my brother and our two neighborhood friends, Allen and Richard, into reenacting what I had absorbed from those stories. In the nearby fields and forests, we charged the Yankees at Gettysburg; we waded ashore at Normandy on D-Day; we built snow forts to serve as our Valley Forge; we stood alongside Davy Crockett, James Bowie, and William Travis at the Alamo.

One occasion of such play-acting remains especially vivid in my mind’s eye. I was 9 years old and had learned, either at school or from my mother’s calendar in the kitchen, that it was Columbus Day. It was October, of course, brisk and windy, and I stood on the brick wall surrounding our patio, the wind blowing on my face, and looked across the back yard to the woods beyond and pretended I was in the mast for Columbus, the sailor who first announced “Land ahoy!”

Maybe I was a weird kid, but there it is.

Today, many of my childhood heroes—Robert E. Lee, for example, or Theodore Roosevelt—are under attack. “Protesters” tear down their statues and try to change the placenames honoring them, and some of our history books, teachers, and professors denigrate their accomplishments. Some castigate those famous men, who once served as my exemplars, as evil.

Christopher Columbus (1451–1506) in particular draws the ire of these radicals. His discovery of the New World soon brought a flood of European immigrants to North and South America. Moreover, he brutalized, tortured, and killed natives of some of the places he visited, though historians continue to debate the extent of these atrocities. Columbus, some revisionists contend, and those who followed him—the Spanish, French, English, Portuguese, and Dutch—brought ruin to entire civilizations, and deserve repudiation and scorn.

Others take a more balanced approach to the Genoese explorer. In his book “Columbus and the Age of Discovery,” Zvi Dor-Ner, who produced the television series by the same name, wisely asks questions about the ways we might look at Columbus. Should we see his daring expedition as a “discovery” that allowed so many immigrants to “escape poverty and religious persecution in Europe”? Should we commemorate it as an “encounter,” where “two peoples were forged into one”? Or should we mourn that first voyage by Columbus as the beginning of an “invasion”?

Columbus earned his place in the history books the hard way. The son of a merchant, he rejected the offer to follow in his father’s footsteps, as was then customary, and was around 14 years old when he first took to the sea. Over the next two decades, he spent much time aboard various vessels, gaining enormous nautical experience as he sailed the Mediterranean and explored as far north as Britain and possibly Iceland and south along the coastline of West Africa. Once, he was in a naval battle in which his ship was sunk, forcing him to swim for hours to the shore using a boat’s paddle to remain afloat.

For much of his life, Columbus struggled financially, retained and deepened his devout Catholic faith, taught himself several languages, and eventually became obsessed with the theory that Europeans could reach the East with its spices and gold by sailing west. Whether he dreamed up this idea on his own or heard tales from sailors who had reached such faraway islands, as many of his contemporaries believed, is uncertain, but he grew determined to test this hypothesis.

Most of us learned the basics of the rest of this story in elementary school. With the financial help of another devout Catholic, the Spanish queen Isabella, Columbus, his crew, and three ships—the Niña, the Pinta, and the Santa Maria—set sail across the Atlantic in search of the East and India, using the best navigational instruments of the time to guide them on their way. Eventually they made landfall, encountered the natives, whom Columbus called “indios,” and returned to Europe, where the Spanish monarchy declared Columbus “Admiral of the Seven Seas” and “Viceroy of the Indies.”

Word quickly spread across the continent of these new lands. In “Columbus: For Gold, God and Glory,” political and business leader John Dyson writes, “The only conceivable parallel in modern times is the return of the first men on the moon.”

Columbus made three more voyages to the “New World,” the second of which found him accused of playing the tyrant to some of the settlers and of cruelty to the natives. On his final trip across the Atlantic, he and some members of his crew were shipwrecked and remained stranded for more than a year on the island of Jamaica.

Though many countries celebrate some sort of day honoring Columbus, the first such celebration in the United States occurred in 1792 in New York City, the 300th anniversary of Columbus’s first voyage. In 1892, President Benjamin Harrison urged Americans to honor the 400th anniversary through a proclamation encouraging people to honor Columbus and “the four completed centuries of American life.” In another 45 years, encouraged by Italian Americans, President Franklin Roosevelt officially made Columbus Day a federal holiday. Today, we observe that holiday on the second Monday in October.

In more recent times, the arguments over whether and how to celebrate Columbus Day have grown acrimonious. Though it remains a federal holiday, some states don’t recognize Columbus Day as an official holiday, while other states, like Hawaii and Oregon, have replaced it with Indigenous Peoples Day.

The Man and His Legacy

Undoubtedly, some European explorer would eventually have discovered these unknown lands, but it was Columbus who had the grit and the vision to lead the way. For better or for worse, his discovery radically changed world history, bringing about both a clash and a melding of cultures, ever-increasing international trade, and the modern world as we know it.

Here was a man with a vision who possessed the capability of sharing that vision with others. Here was a leader who convinced doubtful followers, his sailors in particular, to continue their voyage long after most of them had given up hope of finding land. Here was a man of courage willing to follow his dream even unto death.

Dor-Ner sums up the man in this way: “The story of Columbus is important because he is a thoroughly modern hero—a man complex, imperfect, and fallible, who not only motivated history but was swept by it, and whose deeds bear little witness to his intentions. History is often the chronicle of unintended consequences; as such, it teaches us more about our limitations than about our greatness.”

The Mystery of the Man

Before we pass moral judgment on Columbus, we might pause to consider the times in which he lived and the mystery of the human being.

For everyone from king to peasant, life in the 15th century could be harsh, brutal, and short. A different set of values also prevailed. Actions we now eschew as immoral, such as slavery, torture, or colonization, were commonplace, and Columbus was a man of his time.

While condemning those practices, we might also bear in mind our own recent past: a century of not one but two world wars, a century that also saw 100 million people murdered by communists and fascists.

In many respects, Columbus the man remains a conundrum, like Winston Churchill’s description of Russia as “a riddle, wrapped in a mystery, inside an enigma.” Each of us who walks this planet fits that same description; we carry secrets known only to ourselves, even in this age of self-revelation, and Columbus is no exception. Before we condemn Columbus, we might remember, as Dor-Ner reminds us, that like the rest of us, he was “complex, imperfect, and fallible.”

He was, in other words, a human being.

One last comment: Come Oct. 12, 2020, the real Columbus Day, I intend to step out onto the deck behind my daughter’s house, look across the ocean of grass I’ve mown weekly over the summer and into the woods beyond, and silently cry “Land ahoy!”