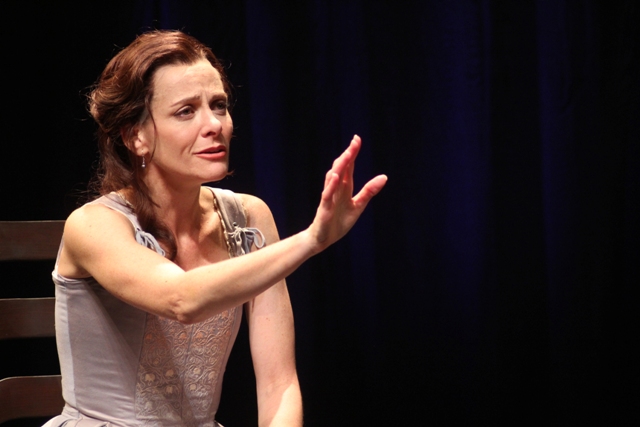 When actress Tracy Michelle Arnold was in sixth grade, she was asked to read aloud the role of Calpurnia in Shakespeare’s “Julius Caesar.” In the scene, Queen Calpurnia begs her husband, Caesar, to avoid the Senate that day—a day which we know as the disastrous Ides of March. Despite the difficulty the language posed for a child, despite the fact that Arnold had little knowledge of ancient Rome, of Shakespeare, of what it’s like to be a queen, she had no trouble connecting to Calpurnia’s character.

“If an 11-year-old can resonate to a piece written hundreds of years ago, then the tie that binds is there, and it can never be unbound,” Arnold said via phone on July 6.

For Arnold, great art, defined by universal themes that strike chords in us, gives us a gift in connecting us to one another. And classics necessarily fall into the category of great art, she said, or we wouldn’t be bringing them back after all these years.

“These are works that strike chords in the human heart, and not just of one race or religion or set of beliefs, but of all humankind,” she said. “They continue to resonate.”

In feeling what others before us have felt, in knowing what others have experienced in a certain situation, classics can offer us a balm for our loneliness. “I’m not alone in confusion or my joy or my sorrow,” Arnold said.

Arnold is amazed, for example, that today we still gather to hear stories that were once told by the ancient Greeks.

Theater as a Classical Form

The entire art form of live theater might be considered a classical construction, emerging as it did in the West with the ancient Greeks. Every year, the ancient Greeks gathered to hear new plays that told old stories.

Because people gather together to witness theater, it is one of life’s most communal events.

Along with events such as weddings, funerals, baptisms, and graduations, which celebrate a life or lives in the past or future, only a handful of other events bring us together.

That is, a shared theatrical experience can reinforce the feeling that we are not alone.

Arnold believes that during a theatrical production, audience members become aware of their neighbors. At some moment in a play, the audience may involuntarily gasp as one, and, of course, each person there can hear others inhaling.

I’m not alone in confusion or my joy or my sorrow.
— Tracy Arnold, actress

In outdoor theater settings, all experience bats flying, birds chirping, the mosquitoes humming, or see twilight or rain approaching. So people come to view themselves as part of the fabric of the overall experience.

In a play, “if a character—a father—dies … [we] all inhale together. You can’t avoid sensing that your neighbor got that same feeling,” she said.

One person may have had a death in the family, another loves his father, yet another doesn’t, and a fourth has lost a father, but three of those people might be trying not to cry, she said.

So, we don’t feel as alone, she said, because we realize in that moment that we all struggle with death.

In her 17th season with American Players Theatre (APT) in Spring Green, Wisconsin, Arnold has performed in many Shakespearean plays, including “Antony and Cleopatra,” “Much Ado About Nothing,” “King Lear,” “Love’s Labour’s Lost,” “Julius Caesar,” “Hamlet,” “Romeo and Juliet,” “The Taming of the Shrew,” “Richard III,” “Pericles,” “Othello,” “Twelfth Night,” and “Macbeth.”

Through the years, many people have reached out to Arnold on Facebook, in letters, or stopped her after a show and recounted how their experience of falling in love, of grieving, or maybe of illness was mirrored in a play.

Arnold recalls one powerful experience after a performance of “Shakespeare’s Will,” a one-woman play.

Vern Thiessen’s “Shakespeare’s Will” is not a classic play, but it is described as poetic and allusive, attributes typically found in classics. Dramatists from the Greeks through Shakespeare used allusions and verse to craft their plays.

Arnold remembers when she first read “Shakespeare’s  Will” and thought, “This isn’t a script. There’s no ‘she said this, she said that.'”

“Shakespeare’s Will” presents a moment in the life of Anne Hathaway, Shakespeare’s wife. Anne is at her husband’s funeral and is trying to reconcile her heart to the fact that William, who died quite rich, only bequeathed to her “the second best bed.”

It’s a powerful thing that you speak a word and it goes into the heart.
— Tracy Arnold, actress

Anne believes her husband held her responsible for their son’s death, which she recounts. Their son died by drowning in the sea.

Arnold was at a restaurant after one of her performances when a woman waved her over to her table. The woman told Arnold how she had left the performance and headed for a bathroom stall to sob. She was grieving for her own son, who’d died a few years earlier, and whose ashes she had scattered over a river.

“It’s a powerful thing that you speak a word and it goes into the heart,” Arnold said.

Everything is filtered through one’s own humanity—life experience to life experience. That connection is the magic, the mystery, the alchemy, she said, that binds us together in theater and can bestow on us the certain knowledge that we are not alone.