Actress Says You Definitely Have to See Shen Yun 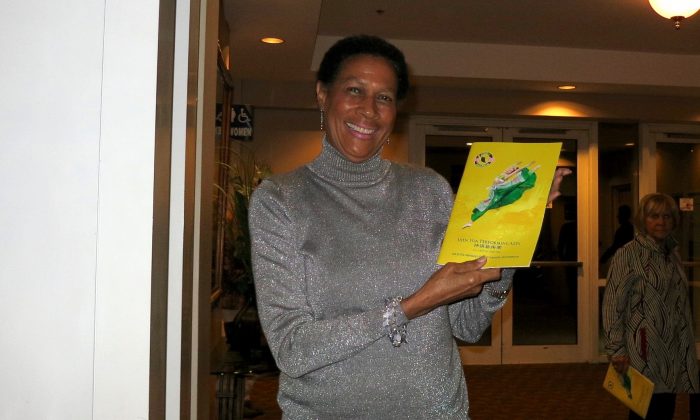 Linda Jones, an actress and model, attended the Jan. 20 evening performance of Shen Yun Performing Arts after having promoted the show to friends around town. (Sally Sun/Epoch Times)

MELBOURNE, Fla.—Linda Jones is multi-talented. She has worked as an assistant principal, a speech and language pathologist, and currently, as a professional model and actress, mainly to be seen in television commercials. To Ms. Jones, Shen Yun Performing Arts was something to talk about.

“This is right up my alley—like nothing I have ever seen,” she said.

When a friend told her New York-based Shen Yun would visit the King Center for the Performing Arts, Ms. Jones was determined to get her hands on a ticket.

But it didn’t stop at her own ticket purchase. She also took promotional brochures to visit stores and people she knew, telling them, “You definitely have to see this show.”

She called her sister in San Francisco to tell her about Shen Yun. Ms. Jones didn’t even say the name of the company before her sister said: “Is it Shen Yun? I have seen them a dozen times.”

Each season, Shen Yun tours the globe, performing in top venues such as Lincoln Center and the London Coliseum. Sold-out audiences have included famous actors, fashion gurus, and government leaders.

After the performance, Ms. Jones added, “They are quite popular, and they are just amazing.”

Ms. Jones walked away with a feeling of interconnectedness.

She said she felt a sense of community and togetherness. “We are all connected to everything—people, animals, buildings. We are all a part of each other.”

The Shen Yun website says: “Mortals and divine beings merge on stage as one. Principles such as benevolence and justice, propriety and wisdom, respect for the heavens, and divine retribution, all come to life, washing over the audience.”

Perhaps it was the this unity between mankind and heaven—as portrayed by the Shen Yun Performing Arts International Company—that inspired Ms. Jones to feel so good.

Or maybe it was the expression onstage of traditional Chinese values that invoked her spiritual side.

As an actress, she could appreciate what she saw in the dancers. She said she learned a lot about Chinese culture at the performance. She also said she recognized a divine influence in Shen Yun.

“I think everything they did—their movement, their facial expression—was all divine.”