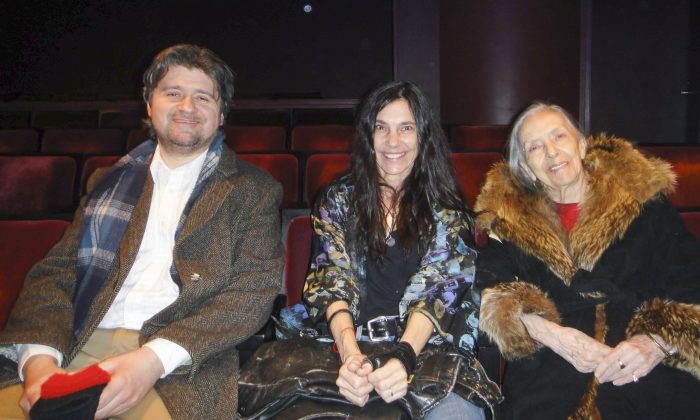 NEW YORK—Actress Liane Curtis felt that she was immersed in a field of divine energy when she watched Shen Yun Performing Arts at the Lincoln Center in New York on March 7.

“[The energy] here is incredibly high, and I felt it comes through the whole audience as well as the orchestra, everybody was in a very high [energy] frequency,” Curtis said.

Curtis, who has been acting on television and film for more than three decades, attended the performance with her 95-year-old mother Paulette Tirard, and writer John Guss.

With a program that features classical dance and ethnic dance vignettes, dance-based stories, and musical soloists, Shen Yun seeks to present the best of China’s ancient culture to a modern audience.

Traditional Chinese culture is grounded in belief in the divine. China itself was once called Shen Zhou or divine land. For millennia, Buddhism, Taoism, and Confucianism have informed the thinking and behavior of Chinese people, encouraging people to live in harmony with their fellow man, with Earth, and with Heaven. Many of the stories and songs performed by Shen Yun reflect these ideas permeating the culture.

“I feel the spiritual nature of the culture coming through all of the art that was performed this evening,” Curtis said.

But the spirituality was not only being conveyed through the content of the performances, it was also through the dancers themselves, said Curtis.

“I think we’re all divine creatures, and I think that the divine expresses through us all in different ways,” she said.

The divine energy flowed from the dancers on stage to the audience, Curtis said, and “even [to] the chairs and the walls.”

“That’s how energy works,” she said.

The result of this effect was the creation of a very large field enveloping the whole theater.

“When the [energy] expresses through so many people at the same time, it’s impossible for the energy not to permeate the whole room and permeate every single fragment that’s in here,” Curtis said.

“It becomes a big, big giant energy ball in one room.”

Guss was enthralled by the artistry, athleticism, and skill-level of the dancers.

The group-style of dancing that requires more than a dozen artists dancing as one particularly impressed him.

“It’s not just an individual dancer here or there,” he said.

Shen Yun’s dancers are world-class artists, expert in classical Chinese dance and Chinese ethnic and folk dances. Classical Chinese dance has a history of thousands of years, and has a rigorous physical component requiring mastery of difficult tumbling techniques and a system of unique movements and expressions.

Watching the dancers on stage share their culture through their physicality brought Gus a pure and simple feeling.

“It’s joy in the dance forms and all the stories being told.”