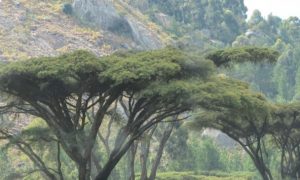 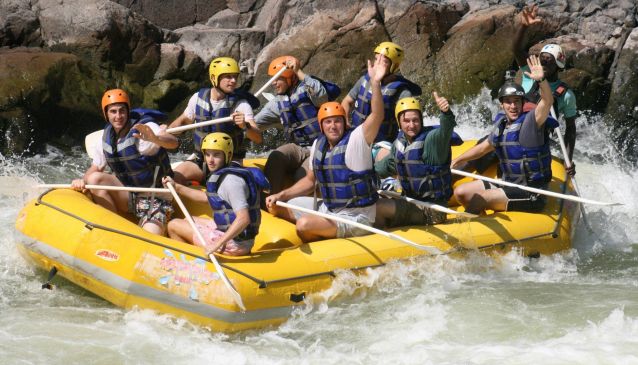 Zimbabwe held three major bucket list activities: witnessing Victoria Falls, one of the seven natural wonders of the world; white-water rafting down the Zambezi River, one of the main arteries of Africa; and conquering my life-long fear of heights by bungee jumping off the Victoria Falls Bridge.

Our week in Zim promised to make some serious progress on our bucket list and provide an adrenaline-fueled complement to last week’s tranquil safari in Tanzania’s Serengeti National Park. Flying in from Tanzania, we spent our first night at Ballantyne’s Lodge in the capital of Harare regrouping and planning out the week.

The following morning we drove north-west to the shores of Lake Kariba, one of the largest man-made lakes in the world and the dividing line between Zimbabwe and Zambia.

There we boarded a houseboat and spent three days chilling out on the eastern shore of the lake. For us, it was a necessary time for rest and catch-up on our videos, which had started to fall behind after so many constant weeks on the road. Most of the time was spent idly drifting between pods of Hippos and crocodile-lined shores, punctuated only by a lunch at the Changa Safari Lodge.

On Patrol with the Anti-Poaching Team

We disembarked at the Gache Gache Lodge, where we met up with the owner, Ray, who invited us to witness a special feature of the hotel: an anti-poaching unit that protects local wildlife in a way that state-sponsored efforts can’t. We rode out with a dozen volunteers at sunset and learned about their work.

In the Serengeti we’d learned about the poaching of rhino and elephants, both of which are hunted for their lucrative tusks. In Zimbabwe, we learned about another side that is equally devastating, if not more so: small-scale poaching of game meat.

In contrast to ivory poaching, this approach set snares in the bush that would indiscriminately kill wandering animals which would then be sold as meat for large profits. Though it may seem less sinister, its blanket attack on the environment makes it extremely pernicious – and much harder to control.

Our afternoon with Ray and the WAPU team gave us valuable insight into this global issue.If you’d like to learn about how you can help the team’s efforts, read more here.

Vic Falls and the Zambezi River

The next morning we woke at dawn and took a bush plane to Victoria Falls, the border between Zimbabwe and Zambia and the adrenaline capital of the country. We checked into the Victoria Falls Safari Lodge for the remainder of the week and formed our plan of attack.

The bungee was easily the most challenging aspect of the trip, so we decided to approach it gradually. We warmed up with a canopy tour of the nearby Batoka Gorge with Wild Horizons before advancing to white-water rafting down the Zambezi River.

Our guides from Adventure Zone explained that the ride would be anything but easy: the 35 km paddle would take us across 19 rapids, many of them in the Class Five category (the most challenging navigable rapids).

We walked down a rickety staircase along the gorge’s walls, reaching the shores of the Zambezi just below the Victoria Falls Bridge, from where we would be bungee jumping later that afternoon. Walking down each step, we got a clear idea of just how far we would fall with the bungee jump, and I simply tried to focus on the task at hand: rafting.

After practicing the basic rafting maneuvers we pushed off downstream, starting big with a class three and followed quickly by a class five. After a harrowing first few minutes we soon found ourselves floating through the gorge, immersed in the serenity of river travel… until the next set of rapids brought us back into the moment.

Over the course of three hours we all got drenched repeatedly, bucked out of the boat, and thrashed to and fro. The final rapid was the largest – a triple set culminating in a wall of water that buckled the boat and sent everyone flying. Somehow, I was the only one to remain onboard!

I considered our luck a good omen. It was time to conquer my fear of heights with a proper bungee. We proceeded directly to the Victoria Falls Bridge.