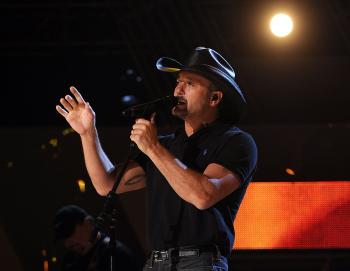 The show is happening at the luxurious MGM Grand Garden Arena in Las Vegas on Sunday and broadcast live at 8:00 PM on the CBS Television Network. Host Reba McEntire was selected as the host due to her multi-platinum record country music career. She was also the star of the TV series Reba which was syndicated on Lifetime and ION Television.

This is the 45th year for the ACM Awards. Fans have been included in the voting process for the first time. The ACM organizers integrated a text-to-vote application powered by Ram Truck.

Toby Keith arranged a new song titled “Cryin' For Me (Wayman's Song)” for the "Stand Up To Cancer" group that was available for sale on iTunes five days before the live play at the ACM event. All proceeds raised from the sales went directly to the charity.

Two days prior to the event, ACM participants Blake Shelton and Bomshel had appeared in "The Price Is Right" show with Drew Carey for a country themed episode.