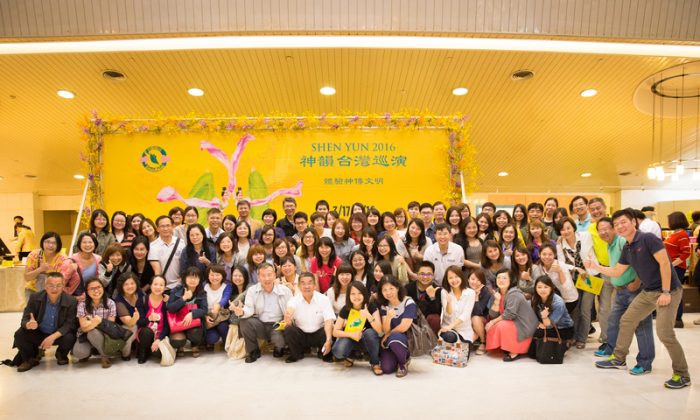 “Awesome!” Yell Mr. Chang Chih-Sheng, the CEO, and the 100 plus employees of Lan-Jai CPAs Firm with their thumbs up after seeing Shen Yun Performing Arts World Company perform at the Taichung Zhongshan Hall on April 9. (Chen Bozhou/Epoch Times)

TAICHUNG, Taiwan—Stunned by performances in the past two years, Chang Chih-Sheng, CEO of an accounting (CPA) firm, was back to see Shen Yun Performing Arts on April 9. And this time, he invited over 100 employees to join him.

“Even just seeing it once makes your life worth living,” he told his employees, hoping they would bring their relatives and friends to see Shen Yun’s performance to benefit more people.

Even just seeing it once makes your life worth living.
— Mr. Chang Chih-Sheng, CEO of a CPA firm

“It’s quite meaningful for a boss to invite his employees to see Shen Yun as it will definitely bring the company prosperity,” said Mr. Chang’s son, an auditor in his father’s company. Lan-Jai CPA Firm has branches around Taiwan with 12 certified public accountants and about 150 employees.

A Variety of Art Forms

Shen Yun is a rarity due to having various art forms in one performance.

“The magnificent scenes, gorgeous costumes, and excellent classical Chinese dance were fabulous,” Mr. Chang said. “All the images presented through dance were just terrific. I was carried away by those pure and beautiful scenes.”

Mr. Chang praised the female dancers, who with their long sleeves were like goddesses descending to the human world.

As for the male dancers, he was impressed by the piece, “Poets of the Orchid Pavilion,” saying, “The male dancers are powerful while carrying the graceful bearing of ancient scholars. They transform calligraphy writing to dance with a masculine temperament.”

“In this piece, dancers use fans to mimic the scholar’s brushes as they write with elegant strokes. Behind them appear the words to the anthology’s preface, now considered one of the greatest works of Chinese calligraphy,” the program notes.

The live Shen Yun Orchestra accompanying the dancers amazed Mr. Chang as well. “It has many traditional Chinese musical instruments in the orchestra,” he said and called the music refreshing.

Shen Yun’s music, the program notes, “draws upon China’s rich culture and history, and is grounded in ancient Chinese melodies. Shen Yun Orchestra delivers this musical experience by blending the singular beauty of Chinese melodies with the precision and power of the Western orchestra.”

Mr. Chang was also attracted by Shen Yun’s innovative high-tech animated backdrops which extend the stage and transport the audience to the realm beyond time and space.

“The backdrop is really miraculous.” He said it looked like that the characters “could fly out of it to the real world [on the stage], and then fly back to different worlds” created by the backdrops.

“It was marvelous, refreshing, and uplifting,” he said, “as everything was coordinated flawlessly.”

Mr. Chang was worried that the rich Chinese cultural heritage will disappear in the next generation.

“Young people nowadays do not quite learn or understand traditional Chinese culture, which is also less and less written about in the textbooks,” he said.

“Classical Chinese dance has a long history of thousands of years, and while soaking up profound wisdom from every era and dynasty, it has become a complete system of dance, embodying traditional aesthetic principles,” says Shen Yun’s website.

“Every piece has profound meanings,” Mr. Chang said. “I felt really uplifted after understanding the meanings behind the dances.”

“I think nowadays young people are too practical,” he continued. “I hope they can pursue something more cultural so their lives will be richer and more balanced.”

He thinks Shen Yun is a real artistic and cultural feast, something to treat and benefit his employees.

“Our job as certified accountants is very boring and stressful,” he said. “I hope they can reach a balance in mind and body” through seeing Shen Yun’s performance.

Mr. Chang’s son, an auditor, shared his father’s insights. “When seeing Shen Yun, I was in quest of my real self. My mind became peaceful,” he said.

He talked about his experience after seeing Shen Yun in the past: “I feel more fulfilled at work and life because I’ve obtained a mind free from care and an innocent heart. I’ve gotten another life goal to pursue.”

As a young man, the younger Chang was deeply inspired by Shen Yun’s performance.

“It helped me define and find meaning in my job,” he said. “I’ve regained peace and simplicity in life. I’ll make it a life goal to practice all that Shen Yun has brought to me.”