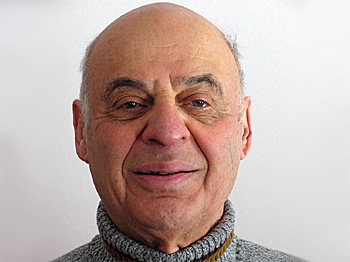 AARON PINES: The most important moments in life come when you least expect it. (Jim Bosjolie)
Life & Tradition

Molly A. Daniels-Ramanujan
View profile
Follow
biggersmaller
Print
Sara and Aaron are an integral part of EcoVillage life for me. Aaron plays chess and beats me each time. Sara is a bundle of energy and most philanthropic. She is free from buzzwords or jargon—she listens. In warm weather, we sit on their porch under a grape arbor facing the Italian landscape.

Aaron’s grandfather, Solomon Polachek, is known to orthodox Jews as a sage.

“At his time, Yeshiva University (founded in 1918, after WWI) was planning a Talmudic Academy. Orthodox Jews believed that their first duty is to study the Talmud,” Aaron says.

“My grandfather convinced them that a university’s purpose should be to improve mankind, and so Yeshiva became a multi-disciplined university. There is a street in Israel named in his honor.”

Aaron’s brother, who died relatively young of leukemia, was named after his grandfather.

Aaron met his wife Sara when he was in his third year of Dental School at New York University. Sara was doing her second year as an undergraduate. Their meeting was meant to be. A year later they were married. (Please also read Molly A. Daniels-Ramanujan's article on Sara Pines.)

“The most important moments in life come when you least expect it,” Aaron says several times during the interview. It is like the base beat of his life story.

The young couple lived for two years in France from Aaron’s peacetime posting in the Army. His military duty done, the couple traveled abroad. Aaron says, “We were unencumbered and young and decided to travel in Europe and the Middle East.” Four months, later they returned to the United States.

At the time, Aaron was torn between two different roads—following inclination and joining the youthful, bohemian life in California, or staying put in New York, working for the City so that he could earn the promise of pension benefits at age 55. He wavered between these two options many times at turns and counterturns. The promise of New York won each time.

An important turn in his life came with his job as a dentist at Willard’s, a Mental Hospital. At first they lived on Willard’s rural campus, but Aaron preferred city life. He says, “A city is a place with sidewalks and movie theaters.”

“In 1971, when daughter Elizabeth was 7 and son David was 2, Sarah went to Cornell to get a Ph.D. in Human Services.”

Aaron jokes about the husband who says that he makes major decisions on matters like communism in China or going to the moon, but the wife chooses where they should live and other such minor matters.

He says, “It so happened that Joan Bokear-Smith lived across the street from us on East Hill, Ithaca, New York, and when she was planning EcoVillage, she held meetings at our house. Sara was part of it and chose to move to EcoVillage. She is a founding member of EcoVillage. I might have preferred to live downtown.”