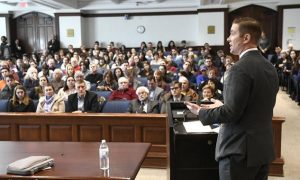 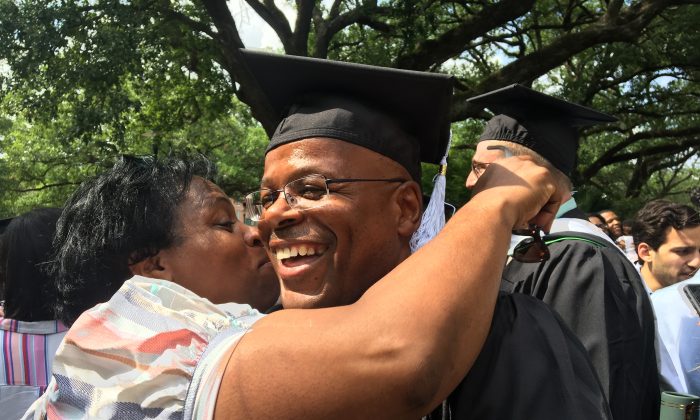 Calvin Duncan (R) with his sister Eva during his graduation from Tulane University in May 2019. (Courtesy of Calvin Duncan)
Life & Tradition

Calvin Duncan was 19 years old and had moved from New Orleans to Mt. Hood, Oregon in 1982 to become a welder and pursue his G.E.D. He also planned on enlisting in the military, but his life would be put on hold for 28 and a half years for a crime he didn’t commit.

Duncan was arrested in 1982 for murder during the commission of an armed robbery. The murder had taken place thousands of miles away in his hometown of New Orleans.

“I actually didn’t believe it until [I] actually was arrested,” Duncan told The Epoch Times.

Duncan knew he was innocent, so he waived his extradition to New Orleans. He thought there had just been a horrible mix up.

Duncan spent two and a half years awaiting trial in jail. As he waited, he hoped that the police would find the person who had actually committed the murder.

When the trial began in January 1985, Duncan was finally made aware of the evidence the state was going to present against him.

Duncan was charged with first degree murder, and to make matters worse the prosecution was seeking the death penalty.

The state had three pieces of evidence: Firstly, there was a 15-year-old girl who claimed she had witnessed Duncan murder the victim, who was her boyfriend.

The second piece of evidence was testimony from police officers in Oregon and New Orleans saying he had made incriminating statements to them.

The third piece of evidence was a call to a crime stoppers tip line accusing him of the murder.

Duncan’s public defenders didn’t have the resources to investigate his case, and he only saw them the night before his trial when they checked to see if he had clothes.

The seriousness of Duncan’s situation had begun to sink in.

“I just knew I was going to get convicted,” Duncan recalled.

Duncan’s trial in 1985 lasted less than a day before the jury convicted him of first degree murder. He was sentenced to life in prison, and would have to fight to prove his innocence.

Even after his conviction, Duncan hoped the state would find the person who had actually committed the murder. He didn’t even hold any ill will toward the witness. He thought she had made a genuine mistake.

Going into prison, Duncan knew he wasn’t the only one there who had been wrongfully convicted. His plan was to save money in order to hire an investigator and get the court documents from his trial.

After working in the fields and donating his plasma, he had saved enough money to get some of the documents from his trial. After going before a review board, he gained the ability to access the law library and studied diligently.

He had become a jailhouse lawyer in the parish prison in New Orleans, and continued to work as one when he was sent to the Louisiana State Penitentiary to serve his sentence. His job was to help other inmates with their cases and get access to the courts.

While working as a jailhouse lawyer, he was able to help numerous inmates.

However, he was uncertain if he’d be able to help himself. Duncan had visited Tulane University twice during his incarceration to pick up law books, and longed to pursue his education there if he was ever released.

Notably, he worked on a case for an inmate named Juan Smith who had been convicted of murder and sentenced to death. Duncan was able to get his case heard in the United States Supreme Court after he made a claim to the trial court.

Smith’s lawyers were able to obtain the trial documents, and then brought the case to the Supreme Court in a case called Smith v. Cain.

The court ruled 8-1 to overturn his conviction because the prosecution had withheld evidence at trial.

“I felt good for him, but then I [thought] about all of the other guys that are still in prison [who] can’t get their documents,” Duncan said.

Duncan then met a young woman named Emily Bolton, and the two founded the Innocence Project New Orleans (IPNO) while he was incarcerated.

The organization ultimately took up Duncan’s case in 2005. He had already served 23 years of his life sentence.

Initially, he thought the judge would be sympathetic to his case. However, the judge indicated that he may have worked on Duncan’s case when he was a prosecutor.

After Duncan and IPNO asked the judge to recuse himself, he denied Duncan’s petition for a new trial.

They appealed the ruling, and the Louisiana Supreme Court vacated the judge’s decision. Duncan’s case was then remanded back to the trial court for a new hearing claiming the prosecution had withheld favorable evidence.

IPNO was able to retrieve the court documents from his trial and investigate further. After reexamining the evidence, the state’s case against Duncan quickly became weak.

They discovered documents that showed the eye witness had made a mistake in her identification as he didn’t match the suspect’s description, and that the two police officers had lied about his alleged incriminating statements. Furthermore, the anonymous tip hadn’t specifically accused him.

The state offered Duncan a deal. He would not be able to maintain his innocence, and would have to plead guilty to manslaughter and attempted armed robbery. He was ultimately sentenced to time served.

After the deal, Duncan was released on January 7, 2011 after serving 28 and a half years. Now that he was free, he was able to start living his life again.

“I felt good. I always prayed that God would release me out of prison. I finally got what I prayed for,” Duncan said.

Duncan was released on a Friday, and was on the campus of Tulane University the following Tuesday.

It was too late to sign up for the spring semester, so he enrolled the following fall.

Nobody was aware he had been wrongfully convicted of murder until the end of the semester when he told his classes. He also told the class they shouldn’t take their education and opportunities for granted.

This past May, Duncan graduated with a Bachelor’s degree in general legal studies.

“That was amazing to be able to walk across that stage despite all the difficulties in life that I experienced,” Duncan said. “It was a very proud moment for me.”

Duncan is also grateful that Tulane University didn’t discriminate against him, and appreciates the university giving him the opportunity to move forward in life despite the fact that he was incarcerated.

Duncan plans on going to law school, and wants to pursue both civil and criminal law. He wants to continue to help others and represent those who have been wrongfully accused.

CORRECTION: An earlier version of this article incorrectly referred to Innocence Project New Orleans (IPNO) as a branch of the Innocence Project. It is a separate organization. The Epoch Times regrets the error.