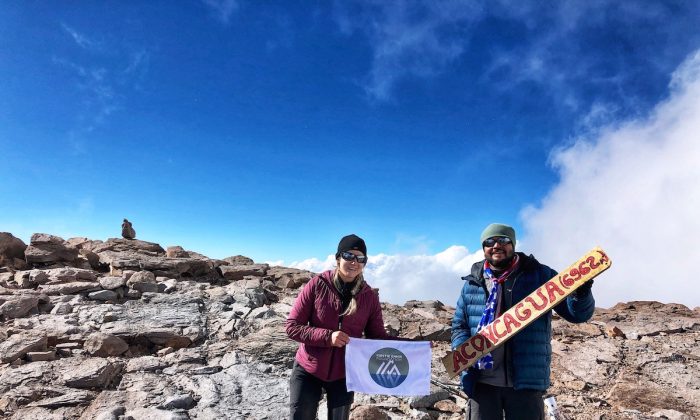 Kirstie Ennis on the summit of Aconagua mountain in the Andes mountain range. (Courtesy of Kirstie Ennis)
People

A Wounded Veteran Takes on the Mountains

Some people let their wounds define them, and others don’t. Despite her extensive injuries, this wounded veteran didn’t pity herself for one second.

Kirstie Ennis served as a machine gunner on a helicopter while she was deployed in Afghanistan. On June 23, 2012, Ennis and her crew were on their way to perform a combat resupply and then an extraction of Marines outside of a forward operating base. Unfortunately, their helicopter never made it to their first stop. The helicopter rolled left, and went down. Ennis was on the left gun.

Ennis was immediately knocked out, and when she came to she rolled her tongue around her mouth and choked on grit. She had lost her jaw, shattered the majority of her teeth, broke her nose, fractured her spine in three places, her arms had been torn from their socket and joints, would lose her left leg, and suffered a traumatic brain injury.

“From that moment on I don’t really remember much. An Army medic, that I was actually really lucky to have been on the aircraft that I was on, he pretty much kept me out of shock,” Ennis told The Epoch Times.

Soldiers carried Ennis and the other casualties to another aircraft and put her on the floorboards. Right before take off, the left gunner told her not to close her eyes because if she did, she wouldn’t open them again. She laid there and told herself she wasn’t going to die without seeing her little sister.

Ennis didn’t immediately realize the extent of her injuries. She thought they would treat her and send her back out. She didn’t realize she was going home until her gunnery sergeant and her sergeant major came into the hospital room in tears.

“In that moment I almost just felt guilty. I was more pissed off than anything that I was going home, and the rest of my guys, the rest of my unit had to stay back in Afghanistan for another month,” Ennis recalled thinking.

On the way home, Ennis wasn’t worried about her injuries. All she thought about was her desire to stay in the Marine Corps.

Ennis stayed in the hospital for two years. She underwent 44 surgeries including an above the knee amputation of her left leg, and would undergo intensive rehabilitation. The Marine Corps assured her they would be able to find her another job.

“For the first year it was easy for me to really push in my recovery because I did. I wanted to get better. I didn’t want to be like a lot of the other people in the hospital around me who wanted to let this define them,” Ennis explained.

Unfortunately, Ennis was found unfit for duty as a result of her traumatic brain and spinal injuries. She felt both her leg and her career had been taken from her. She had to reflect and determine for herself why she was still fighting. With a strong support system including her family, she pushed herself to keep going.

For two years, Ennis worked on her memory, word recognition retrieval, pronunciation, and attention. Initially she could barely talk or form a sentence.

She engaged in occupational therapy and received treatment to address her other injuries including facial reconstruction, jaw replacement, teeth replacement, and surgeries on her arms.

Leaning how to walk again was one of the most difficult aspects of her recovery. She had to learn how balance, how to stand, and how to engage her other muscles to move herself forward. In order to push herself to overcome these obstacles, she thought about all the soldiers who never made it home.

She had earned her master’s degree in psychology while she was there. During her recovery, an organization came to the hospital and asked her if she had any desire to learn a winter sport. She did, and afterwards she went to a winter sports clinic in Breckenridge, Colorado and she told them she wanted to snowboard. She learned how to ride quite quickly, and became ardent about the sport.

“[I] hit the ground running with it and became obsessed with it just because it was something that no one can do that sport for me. Sure, someone can help me get off the chairlift or whatever, but I have to be independent and I have to rely on me and my abilities, basically,” Ennis explained.

She competed alongside the U.S. Paralympic team, was the U.S. national champion, and was fifth in the world for a long time. Despite her accomplishments, she didn’t care about the medals. She just wanted to be good at snowboarding.

She had her last surgery in 2016, and couldn’t snowboard that season. She ultimately became introduced to mountaineering, and climbed Mt. Kilimanjaro for a charity that raised $150,000 for clean water.

After that summit, she was hooked. She looked back on her experience and decided she would climb the Seven Summits, which are the highest peaks on each continent.

For each climb, she raises money for a non-profit. Ennis will be climbing Mt. Everest starting on April 1, 2019 for her own non-profit called the Kirstie Ennis Foundation.

“A lot of it really just boils down to finding out what you’re capable of. For a long time in the hospital, people put so many different limitations on me. It really did, it pissed me off. So every time that I’m struggling up a mountain or I’m scared or suffering or whatever, I just think about that,” Ennis said.