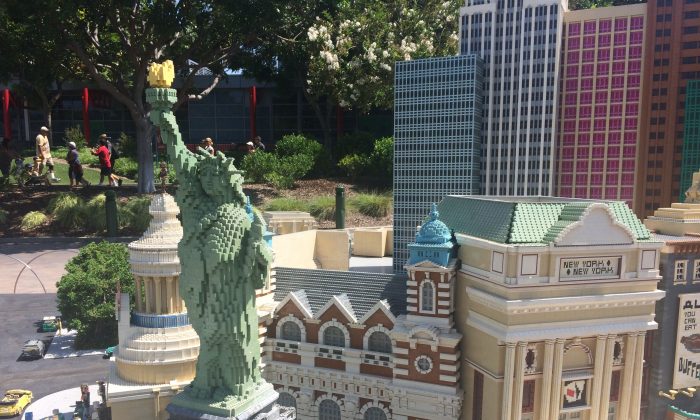 A World of Fun and Learning at Legoland

Plunged into a world of fighting fire dragons, ninjas, and larger-than-life creatures, I realized I had begun a challenging voyage with my two young grandsons. It’s amazing what one will do for the love of grandchildren!

I wanted 7-year-old Hayden and 10-year-old Ryder—both of whom are addicted to Lego building—to see their grandma as an active and adventurous senior ready to take on fun and new experiences. So I ventured into an over-sized world of building bricks, slides, and rides at the 128-acre Legoland theme park in Carlsbad, California. My daughter and son-in-law were part of the family excursion, which turned out to be helpful given the specific preferences and personalities of the boys.

Located 30 miles north of downtown San Diego, Carlsbad is a seaside community, which makes it an ideal location for Legoland. Offering more than 60 interactive rides, shows, and events, the park is considered a creative destination for families with children aged 2 to 12. There are some 30,000 Lego models created from 62-plus million bricks, some of which are life-size or bigger.

Following the path of least resistance, with map in hand I proceeded with the family to Explorer Island, the first of nine areas that we would visit during our two days at the park.

Our first ride was on the Safari Trek, which gave us an introduction to the Lego animals of the wild. However, it was the Coastersaurus rollercoaster that had Ryder and me screaming on every curve. This brought me back to my youth and how I had always enjoyed such thrill-rides.

Unfortunately, Hayden had some fear of fast rides and dark tunnels, which limited his experience somewhat. There were enough activities, though, to keep his interest along the way, such as Lego-building stations adjacent to some of the waiting lines for the rides.

At Fun Town’s Adventure Club, Ryder had to search for hidden keys as we rode through mysterious passageways filled with objects and figures built from Lego bricks. Then he and Hayden enjoyed DUPLO Playtown and Kid Power Towers, a soaring vertical ride that gives a birds-eye view of the park below.

One of the highlights was the marvel of Miniland USA, a miniature, intricate Lego world of major cities such as New York, San Francisco, Las Vegas, and Washington that the entire family enjoyed exploring. Ryder and I spent much time talking about the individual cities, and we were in awe of the intricacy of the construction. The model Brooklyn and Manhattan bridges alone took 150,000 Lego bricks to create.

Both boys focused on building boats of bricks and tested them out in the water, which gave us adults a chance to rest our weary feet before taking a scenic boat ride that passed through giant Lego figures and a replica of Mount Rushmore.

Afterward, we enjoyed a healthy lunch at the nearby Garden Restaurant, which offered a reasonable selection of salads, sandwiches, and house-made veggie soups. Another unexpected treat was the tasty Vietnamese lunch that we relished the next day at Ninjago World’s Ninja Kitchen near the main entrance.

Ninjago World is Legoland’s newest and most popular addition, and it was here that Hayden was able to get past his fear of dark passages because of the action-packed interactive ride, which he went on with us at least three times.

The Pirate Shores ride, which I opted out of because of the huge wall of water soaking you as the ride falls from a drop, was one of Ryder’s favourites. This also was a prelude to the Water Park, a separate area unto itself where we spent much of day two.

Our overnight at the nearby Cape Rey Resort & Spa was a peaceful escape from the hectic but fun-filled day. Only seven minutes from Legoland, with shuttle buses to and fro, the hotel is just off the beach and offers special summer and fall Legoland packages for families of two and four.

Though we could have experienced most of the Legoland activities in one day, we needed that extra day for the Water Park and its thrilling slides, which the boys were looking forward to from the get-go. It was here that I stepped out of my comfort zone when I donned my bathing suit and went with my daughter and Ryder on a rubber raft down the giant Orange Rush water slide.

“It’s so cool to have a grandma who goes on all these rides and even the waterslide with me,” Ryder said later. At that moment, just the look of pride on his face was more of a thrill for me than any ride.

I definitely returned from this family vacation feeling more connected to my grandsons, having been an active participant versus an observer. Perhaps now I can officially call myself a ninja grandma.


Beverly Mann has been a feature, arts, and travel writer in the San Francisco Bay Area for the past 30-plus years. She has received numerous accolades in various fields, including a Bay Area Travel Writers Award of Excellence in Newspaper Travel Writing.