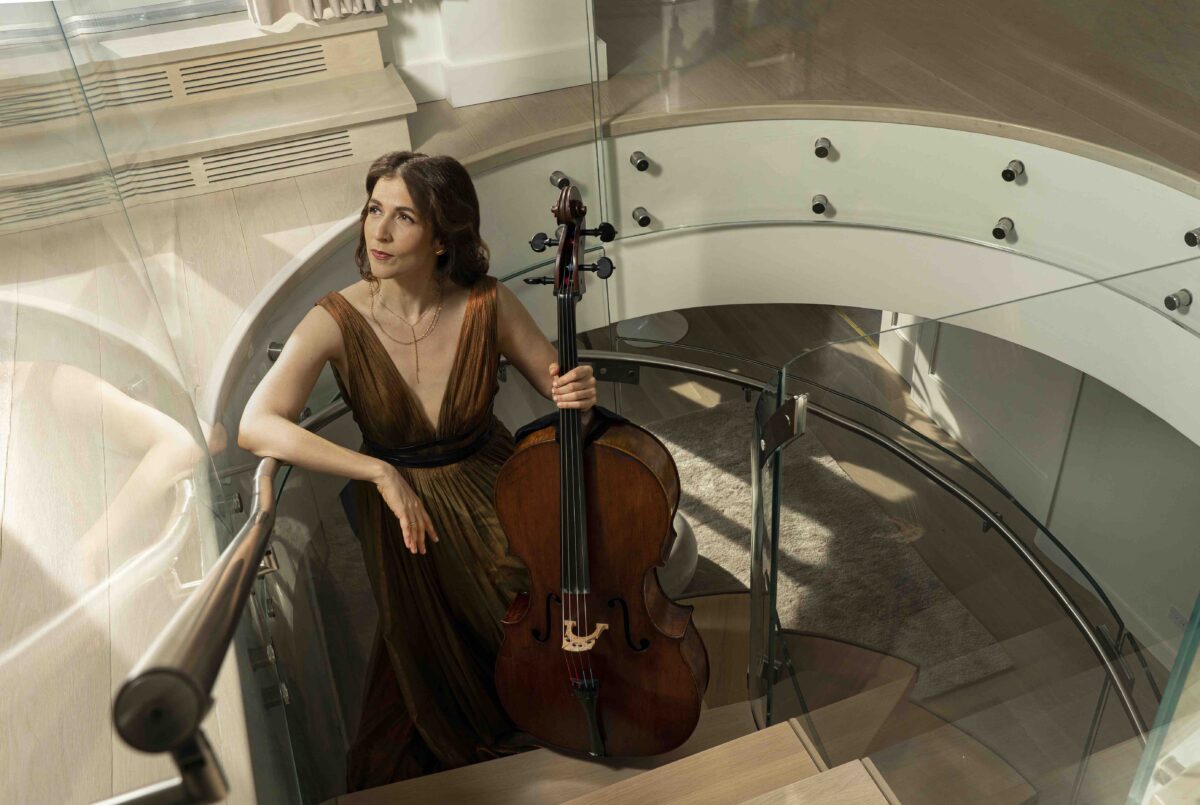 Art is all about communication, says cellist Inbal Segev, who grew up in Israel. But with music, before you can hear enough to comprehend a message, you are first met with the sound—and Segev has spent her entire career in the pursuit of beautiful sound.

“I want to do the best I can to communicate with the audience and bring something new to the audience,” Segev says. Driven by nature, Segev was dubbed a prodigy at a very young age. Her mother, a pianist, instilled in her a love of music from childhood; and Segev picked up the cello at age 5, never for a moment imagining her life without it. At 8, she performed for the Israeli president.

It was a recommendation from legendary violinist Isaac Stern that led to her studies in the United States. She made her international concerto debut with the Berlin Philharmonic and the Israel Philharmonic, under conductor Zubin Mehta.

Listening to Segev is truly an experience in the possibilities of sound. Within a beautiful soundscape, her erudite mastery of tone invokes story and drama—whether she is delving into Bach suites or interpreting the voice of a fresh up-and-coming composer.

“The sound is the most important thing that we sense. I’m drawn to tonal music, the new and old combined,” Segev explains. “I grew up in the golden age of recordings, where it was all about sound. Things have changed a lot!”

Segev gave a recent interview between performances with the Chamber Music Society at Lincoln Center. She has gradually begun to give more live performances, and has resumed a busy touring schedule that was interrupted during the pandemic. “It’s really great,” she said. “I think any performer will agree; we need that energy that only comes with a live audience.”

Not that time at home during the pandemic lockdowns was an extreme hardship—family is tremendously important to Segev. And being able to spend more time with her husband and three children was a blessing.

Segev began to perform very early in her life, and she was also sent to study in the United States early on. She got a full scholarship to study at Yale, which, she says, was an amazing opportunity. During that time, she already had a few very high profile concerto engagements. But, after getting out of school, Segev says, “I wasn’t a wunderkind anymore.”

There were a few years of struggle when Segev freelanced, had a family, and then realized there was more to music and more to life than just a career. Her family put things in perspective for her during that time, and made her relax about where music fit into her life. “And then afterward,” she says, “that part, my career, really just blossomed.”

Her husband, Thomas Brener, is her partner in life and in business. Her career is a little “out of the box,” Segev explained, as the two of them commission a lot of new music. During the pandemic, they began a large, multi-year project, “20 for 2020,” which is a series of albums of new music commissioned for Segev. These days, it’s not just about recording; everything is visual, and Segev has already gotten into the habit of recording video for everything as well.

“I like it to be not too simple, with some complexity and depth to them,” Segev said of these new works. “Also, if it’s not enjoyable on first listen—usually I stay away from those. I like there to be a strong voice, meaning this composer wrote it and not a hundred others.”

Segev is no stranger to large recording projects. In 2015, she released an album of the six Bach suites, a monumental milestone for any cellist. This is the kind of music you can spend a lifetime with, and Segev says if she recorded them again today they might not sound the same at all—perhaps freer, less bound to perfection in the moment, and faster.

Segev has lately been studying historically informed performance (also referred to as “period performance,” or HIP), which is not the style of playing she is used to. She is still trying to find a balance between the modern allowance of a big hall and big beautiful sound, with the feeling of playing on the gut strings of a baroque cello that would have all the stylistic rules of the period.

Something still feels missing for Segev in both strictly baroque and strictly modern interpretations. “It’s hard to find your way in these two worlds,” she said with a laugh. “You can really create a whole world with just the cello.”

But, in the end, she adds: “Things change—luckily! Otherwise life would be boring.”