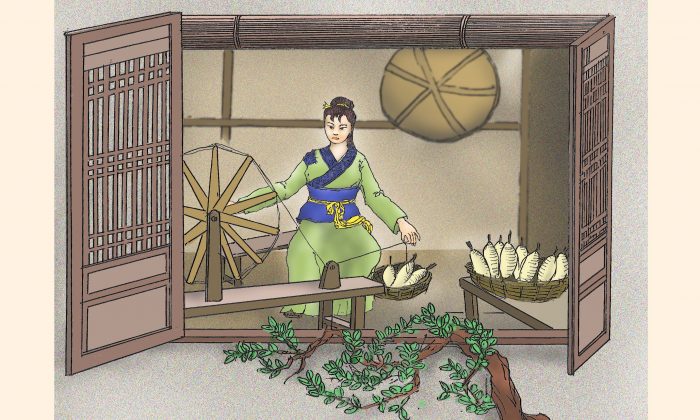 There was a woman in Duchang County in Jiangxi Province by the surname of Wu. She had lost her husband, Wang Yi, many years ago but had remained a dutiful daughter-in-law.

Her mother-in-law was advanced in years and suffered from eye diseases. She felt sorry for Wu, and as they were living in dire poverty, she decided to get Wu a husband and make the man her adopted son.

When Wu learnt about her mother-in-law’s intention, she cried and said to her: “A woman must not have two husbands. I’m able to provide for myself and take care of you. Please do not make such a suggestion again.”

She did not mince words. Seeing how unyielding she was, her mother-in-law did not bring the matter up again.

Wu was hardworking. She made some money by helping her neighbors with weaving, washing, sewing, cooking, and cleaning. All her earnings went to her mother-in-law for living expenses. If she happened to get some meat, she wrapped it up nicely and took it home for her mother-in-law.

Wu was honest and never spoke ill of others. She did not covet other people’s money and only took her rightful share. Her honesty made her popular among people who needed to hire helpers. Wu managed the household well and was able to make ends meet with her mother-in-law.

Once, Wu was steaming rice when someone called to her from outside. She stepped out to speak to the person. Fearing that the rice might get overcooked, her mother-in-law removed the rice from the stove and put it in a basin. But since her sight was poor, she did not realize the basin was dirty.

When Wu came back and saw the rice in a dirty basin, she did not complain or make a fuss. Instead, she borrowed a bowl of rice from a neighbor for her mother-in-law while she cleaned and re-steamed the contaminated rice for herself.

One day, the neighbors spotted colorful clouds descending from the sky, with Wu rising among them into the sky. Shocked by what they saw, they lost no time in informing Wu’s mother-in-law.

Her mother-in-law said: “Don’t be ridiculous. My daughter-in-law just came back from pounding rice. She’s tired out and is resting in her bed. Check it out if you don’t believe me.”

The crowd went to Wu’s room and saw that she was indeed fast asleep. Alarmed, they left quietly.

There was indeed a string of money on the bed, and the entire house was filled with a pleasant aroma. It struck Wu that she really had made a trip to Heaven.

From then on, more and more people wanted to hire her. She gave the string of money she received from the Celestial Emperor to her mother-in-law. Every time the money was used up, another string would appear. Wu and her mother-in-law were never poor again. Her mother-in-law even got back her sight.

A story from the Records of Yi Jian/Record of the Listener, a record of supernatural stories compiled by Hong Mai (1123 – 1202) during the Song Dynasty.