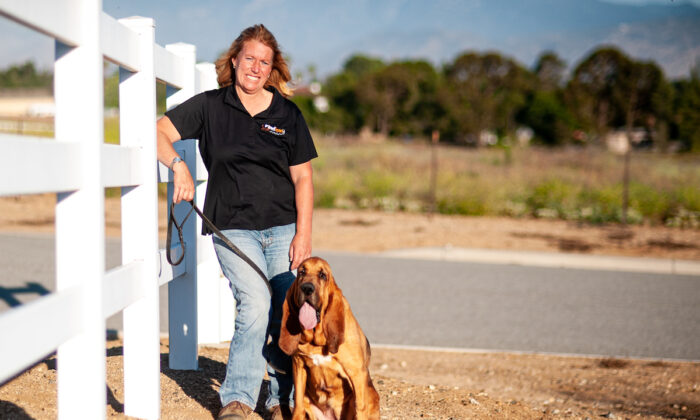 A Woman and Her Bloodhounds Are on the Trail

Dr. Coby Webb has been a law enforcement officer in Southern California since 1993. In 1999, she started training bloodhounds at her agency, and in 2003, she became an instructor. For Webb, her bloodhounds make all the difference when looking for the missing, and tracking criminal suspects.

Webb described the training process for bloodhounds as a game of hide and seek. They begin training the dogs when they’re 8 weeks old, and teach them to chase someone who starts to run. Then, the trainer starts adding turns so the dog has to use its nose to look for the person.

Webb also teaches the bloodhounds to scent discriminate, so that they are able to track one person’s scent. For the dog, it’s a game of finding the subject in order to receive a reward. As they mature, Webb makes the trails longer and older. For Webb, its harder to train the handler than the bloodhound.

“It is really about learning about your dog and how to read them, and then learning how to be a team together,” Webb said.

Bloodhounds are a working breed, and their sense of smell is nearly unrivaled. They can track a missing person or criminal suspect for miles. Webb’s personal record with her bloodhounds is eight miles of tracking.

Moreover, they love having a job to do.

“They’ll work so hard for you for that cookie and that praise … it’s the joy of the game,” Webb said.

Webb’s career was interrupted when she was involved in a car accident in 2010 while visiting her parents in Oregon. Webb’s car hit black ice, and her vehicle began to slide. Webb’s car collided with another vehicle, and she took most of the impact on the driver’s side door.

Fortunately, her twin daughter and son only suffered a broken foot and concussion, respectively. Webb sustained a broken back, a spinal cord injury, a broken femur, and a broken hip, and she broke all of her left ribs.

Webb was paralyzed from the waist down.

“My mentality was I had nothing to lose but to try,” Webb said.

After using a wheelchair, she began using a walker, then two claw canes, two straight canes, and finally one straight cane. Nine months later, she was able to walk again without assistance. Shortly thereafter, she was back training bloodhounds.

“I could have tried to be a professor somewhere because I had an education, but it was still the same calling. I didn’t think I was done giving. I still think I had more to give,” Webb recalled.

Webb has been training and working with bloodhounds for two decades, and there have been some memorable cases that have stuck with her.

Webb’s first bloodhound, Maggie Mae, made case law in the case of Bailey Jackson. Jackson had raped and murdered an elderly woman and had raped a second. After leaving the second victim’s house, Maggie Mae followed a trail and arrived at another house, where she began circling a trash can. It was dump day, which was disheartening for Webb.

However, when Webb opened the lid of the trash can, she found the purse of one of victims. Maggie Mae turned and walked up a driveway, and went onto the patio of the house. She then turned around, walked up to the neighboring house, and stopped.

Webb found out later that the suspect had gone to the first house to ask for money, and then went to the second house, which belonged to his parents. Webb had to tell the detective that Maggie Mae wasn’t going anywhere. Either there was another victim, or the suspect was in the home. In fact, the suspect was there when the police entered the house. Maggie Mae had tracked his entire route.

Maggie Mae was also instrumental in helping the FBI find Samantha Runnion, who had been kidnapped in 2002. After authorities found Runnion’s body, Maggie Mae helped track the suspect who was ultimately apprehended and convicted of kidnapping and murder.

“I took a couple of days off work after that case, and so did Maggie. They really stick with us,” Webb said.

For a bloodhound to be able to find a missing person or a criminal suspect, they need an item with the person’s scent on it. Without that scent item, the best bloodhound in the world won’t be able to do what they do best.

What bothers Webb the most is the people that she and her bloodhounds haven’t been able to find. In an effort to help the bloodhounds do their job, she developed a product called Find’em Scent Safe.

The product is intended to provide an uncontaminated scent sample, in case a bloodhound ever needs to track that person.

The kit includes a piece of gauze that is placed on an odiferous part of a person’s body. After five minutes, the gauze is placed in a tamper-evident bag, and is dated and labeled with the person’s name. The bag is then placed in a case, which is stored in a freezer. The scent item can last for up to 12 months.

Having a scent item readily available helps the bloodhounds start tracking immediately, and maximizes the chance of finding the subject alive.