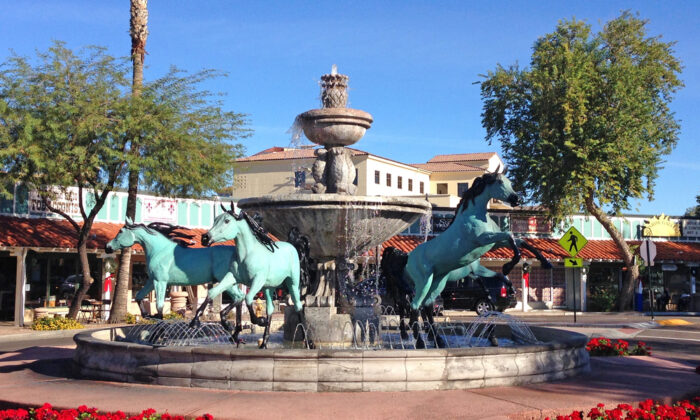 A Weekend Getaway in Phoenix

When spring arrives, I start dreaming of warm weather and bright sunshine. Unfortunately, Mother Nature doesn’t always deliver that in the springtime, especially if you live in the northern parts of the country.

Fortunately, warm sunshine is abundant in Phoenix, and April is an excellent time to visit. I went on a recent weekend trip with my sister and mom, and we packed in a good variety of activities and adventures.

A Stay at The Wigwam

We anchored our visit with a stay at The Wigwam, a historic Southwestern property that’s a destination of its own. First opened in 1929 as a guest ranch, it added a golf course one year later. Since then, The Wigwam has grown into a large luxury resort with 331 adobe casitas on 400 acres of beautifully landscaped grounds.

The Wigwam is quintessential Arizona, with towering palm trees alongside tall cactus and flowering bushes. Many guests never leave the property since it has two huge pools (including a water slide), three championship golf courses, and a full-service spa.

We spent several hours by the pool drinking piña coladas and reading our favorite novels. The resort has three restaurants onsite, include the upscale Litchfield’s, which serves seasonally inspired fare, Red’s Bar & Grill, and the Wigwam Bar.

But as nice as the resort was, we wanted to see more of Phoenix and the surrounding region. Phoenix is in the heart of the Sonoran Desert and the desert has its own kind of beauty.

We saw that firsthand on a visit to the Desert Botanical Garden, a large botanical garden with more than 50,000 plants. I wasn’t sure what to expect, but I was surprised to see the vast diversity and splendor of the desert vegetation lining the five thematic trails that meander through the park.

We stooped to view tiny desert blooms, strolled through palm trees and flowering plants, then stood in awe at the base of massive saguaro cactus. The park is stroller-friendly, and they offer several programs for children, so it’s great for the whole family.

You can’t visit Phoenix without a visit to Old Town Scottsdale. This hopping neighborhood pays tribute to the region’s Southwestern roots. It’s filled with boutique shops, hip eateries and bars, and is a popular destination for shopping and nightlife.

Old Town Scottsdale is a must for souvenir hunters. You’ll find everything from cowboy hats to Southwestern art. I picked up several local hot sauces and jams that I’m still enjoying at home weeks later.

In Old Town Scottsdale, we had a yummy lunch at Rehab Burger, and dinner another night at the popular Citizen Public House. Since my sister is an ice cream fanatic, we had to stop in at Gelato Cimmino and the ’50s-style ice cream shop Sugar Bowl. All received good reviews.

Phoenix has a gem in the Musical Instrument Museum, the largest of its kind in the world.

To be honest, the museum’s name didn’t immediately pique my interest, but I was overwhelmed by the huge collection of original instruments and the engaging ways that music is presented.

What I enjoyed most, though, was that many exhibits highlight music in countries around the world and include a video of a music performance from that region. My family roots are in Latvia and Sweden, so I was thrilled to find original instruments from those regions, as well as video of small music groups performing in those languages. It was like a little cultural trip around the globe—and we ended up staying until the museum closed.

Although I’m not a golfer, thousands visit the city each year for golf. Phoenix has 185 different golf courses, so there are options to choose from. Many golf courses in Phoenix were designed by the greats. Boulders Resort & Spa has two award-winning Jay Morrish-designed courses. JW Marriot Phoenix Desert Ridge Resort & Spa is home to the Wildfire Golf Club, which has two championship courses designed by Nick Faldo and Arnold Palmer.

The Arizona Biltmore Golf Club is perhaps the granddaddy of them all. Built in the late ’20s, the courses have been played by celebrities, U.S. presidents, and foreign dignitaries.

While I may not play golf, I loved visiting the Tierra Luna Spa at the Arizona Biltmore. Arizona Biltmore Resort & Spa, a Waldorf Astoria resort, has been a celebrity playground for decades. The resort’s 39 acres are in the foothills of Phoenix’s posh Biltmore Estates district. Flowering gardens, tall palms, dripping fountains, and the rugged Squaw Peak provide the backdrop for this Arizona oasis.

Frank Lloyd Wright, the consulting architect for the hotel, held true to his style. Straight lines, geometric forms, and contemporary furniture merge seamlessly with organic earth tones and local materials. The copper roof shimmers in the Arizona sun, and the lobby’s preserved gold-leaf ceiling remains second in size only to the Taj Mahal.

Opened in 1929, the resort was Wright’s first hotel project, and it remains the world’s only existing hotel to bear his name.

While we wished we could have stayed longer, a weekend was still long enough to see much of what Phoenix had to offer. Who knows, I may book a last-minute return trip again soon. Phoenix sounds especially good during those long northern winters.