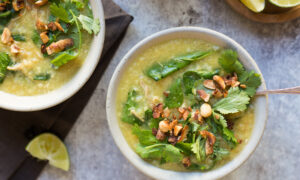 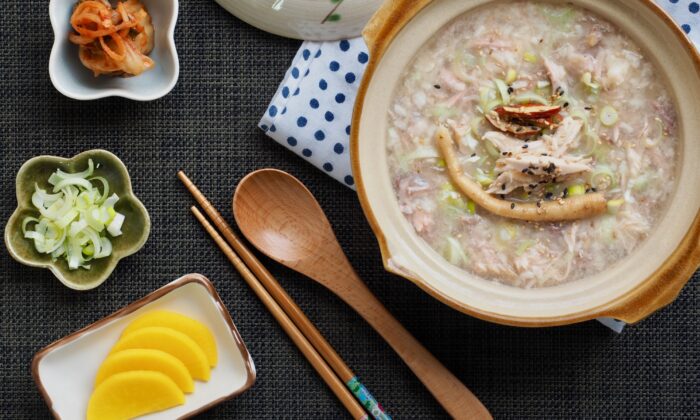 Juk can be cooked and topped with a variety of ingredients. (Sungsu Han/Shutterstock)
Food & Dining

A Warm Hug in a Bowl of Porridge

Every day after school, my mom would feed me the same thing: juk—Korean rice porridge—with kimchi and Spam. It was my afternoon snack of choice, a simple bowl I often opted for even over a McDonald’s Happy meal.

I called my mom’s rice porridge “water-bap”—bap is Korean for “rice”—as it was a dish of merely plain white rice boiled with water, no salt or soy sauce. She’d cook the rice until the grains became gorged and broken, turning soft and velvety, while the surrounding water thickened with the starch—akin to oatmeal in texture. It was admittedly completely bland, but in a very soothing, comforting way.

With my young palate, mine were still simple. My mom would rinse the kimchi to remove the spice, leaving only some welcome tang and texture, and dice and lightly pan-fry the Spam, just enough to have the slightest browning around the edges.

I distinctly remember crafting each bite with care: I’d scoop a bit of juk into my spoon, and then delicately balance a piece of kimchi and Spam on top and eat it in one bite. Together, this simple medley created a perfect symphony: salty and sour, meaty and crunchy, all against the mild, creamy porridge.

For at least 3,000 years, this soothing staple rice gruel has been cooked in various ways throughout Asia, deeply rooted in a number of culinary traditions. In its most basic form, the dish is comprised of grains, such as rice or barley, and water or stock, simmered together until they form a thick, cream-like porridge.

In China, congee differs greatly regionally, both in texture and choice of toppings, which span savory to sweet: salted eggs, savory fritters (youtiao), pickled greens, pork floss, nuts, fruits, and sugar among them. Japanese kayu or okayu is often made with just water and short-grain rice, and served with few adornments, such as fish roe or pickled plums, most commonly as a remedy when ill. In Indonesia, bubur ayam is a popular breakfast dish, combining porridge, shredded chicken, and various toppings, and in Thailand, jok is also served for breakfast, but with a runny egg and numerous savory garnishings.

The Korean word juk stems from the phonetic Cantonese pronunciation of the dish, jook. Historically, juk was a means to stretch food during times of famine. Starchy and filling, it makes you feel full even when accompanied by just a few sparse condiments, if any at all. It’s a fundamental dish in Korean temple cuisine, due to its digestibility and its blandness; temple cuisine is purposely void of any pungent ingredients that could excite or upset the monks’ peaceful practice.

But despite its humble origins, juk has become a much-loved comfort food enjoyed even during prosperous times. It’s a staple in most Asian homes today, and many rice cookers—another staple of modern Asian homes—even have a special “porridge” setting. There are also restaurants that specialize in this homey gruel, and you can also find individual serving packs sold in convenience stores.

Juk’s popularity is due in part to its healing and nourishing characteristics. It’s warming to the body, highly hydrating, and soothing for the stomach, and when made with a good stock or bone broth, is rich in protein and collagen. The comforting porridge is a quintessential sick day food, especially for an upset stomach. Mothers even also use juk to wean their babies, and the elderly often eat it to ward off disease.

When made properly with homemade stock and fresh ingredients, this traditional poverty food can be turned into a delicacy. In fact, a luxurious version made with coveted abalone (jeonbok juk) was often presented to the royals of Korea, and is commonly found in high-end restaurants today.

Still, I find myself craving my mom’s simple version, even now as an adult. I have such a nostalgic love for this humble bowl—the edible equivalent of a warm, comforting hug.

Nowadays, I do usually make a slightly more elaborate version of my mom’s recipe. I start with a flavorful homemade chicken stock, instead of water, and finish with a few vibrant toppings, such as kimchi, pan-fried mushrooms, and fresh chives.

There are a couple of tricks to making a good juk. You can soak the rice first to reduce the cooking time, then sauté the wet grains until toasted to add a nice nutty flavor to the dish. Finally, have fun with the toppings—pretty much anything can be thrown on top!