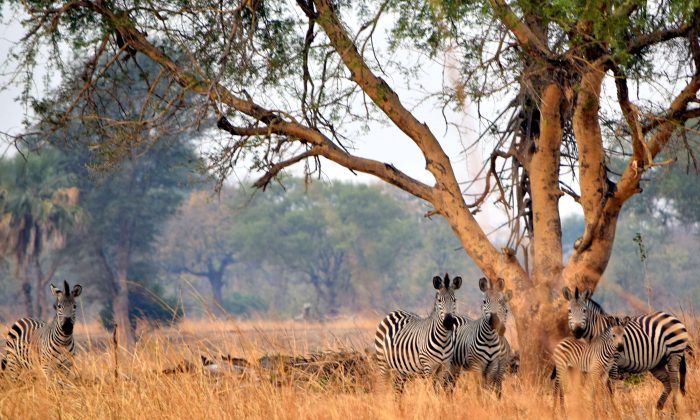 A Walking Safari in Zambia

SOUTH LUANGWA NATIONAL PARK, Zambia—Kangachepe Banda poked at a pile of elephant dung with a twig, exposing thousands of undigested acacia seeds. He was about to explain their significance when he noticed a moving dot in a tiny cone-shaped hole nearby. “See that ant scrambling up the pit?” The sand beneath the insect quivered. Down the funnel it fell.

“That was an ambush,” said Banda, our guide, explaining that one of nature’s smallest predators, the antlion larva, creates sand traps to lure and capture its prey. Its sickle-like jaws were sucking the life out of the ant inches below our feet.

Paired with the Little Five are the “Big Five”—the lion, elephant, buffalo, leopard, and rhinoceros. Once considered the most dangerous animals to hunt on foot in Africa, the Big Five now represent the most sought-after sightings on a photographic safari. I was here to see them.

I had viewed big game animals on many conventional safaris from within a vehicle. As my experience and confidence in the bush increased, I yearned for a more physically challenging and interactive experience. A friend suggested a walking safari. The tradition began with conservationist Norman Carr in Zambia in the 1950s and has flourished over the years. Zambian guides are considered the best trained in Africa.

I booked a mobile walking safari with Robin Pope Safaris. Pope began his career working with Carr and came up with the concept 26 years ago. A guide drives guests to a remote location about six hours from the largest village, Mfuwe. A team relocates and sets up a new camp every couple of days, freeing up guests to spend most of their time trekking in the bush.

At 3,500 square miles, South Park is about half the size of New Jersey. It’s located in the lush Luangwa Valley, which was carved by a branching fracture of the Great Rift Valley millions of years ago. Steep escarpment walls enclose this sunken region. Annual floods and a species of tsetse fly that kills cattle and bites humans have protected these floodplains from human encroachment.

Up until the 1970s, the valley was a wildlife paradise, containing one of Africa’s highest game populations. But by the mid-1980s, poaching had killed off all the rhinos, elephant numbers had dwindled to fewer than 15,000 from an estimated 90,000, and thousands of buffalo had been slain for their meat. A government controls and a moratorium on trade in ivory in 1990 helped stop the slaughter. Today, lions, elephants, buffalo, and leopards inhabit this landscape in large, healthy populations.

I relished this news, but the ant shifted my priorities. Did I really need to see the big guys, on foot, face-to-face on their turf?

In a reversal of fate, I felt like the ant now, hobbling along a sandy basin, exposed and vulnerable. I decided I would be perfectly content if all I encountered were Little Fives.

That was not to be.

Our days began with a 5 a.m. wake-up greeting and the sound of warm water pouring into basins outside each tent for splashing faces. A fragrant mopane-wood fire in the outdoor dining area served as a stove for cooking up oatmeal. Shannon, the camp hostess, poured us coffee or tea. The chef’s assistant, Jackie, toasted thick slices of freshly baked bread over the fire. We helped ourselves, buffet style, to a hearty spread of hard boiled eggs, cheeses, peanut butter, jellies, and jam.

We walked in single file, led by Isaiah Sakara, a lean, focused, armed wildlife ranger carrying a bolt-action .375 rifle. He told me he’s never had to shoot an animal or even fire a warning shot on a walking expedition. Banda, whose eyes constantly roved left, right, and skyward, walked behind Sakara. My three travel companions and I followed. Tea bearer Geoffrey Phiri brought up the rear.

Our second day out, an impala’s alarm call and a dazzle of fleeing zebras propelled us toward the action. A mix of emotions grabbed my insides: excitement, anticipation, and joy. Surprisingly, no fear. A particular monkey cry convinced Banda we were on the trail of a leopard. Then silence. “We may have lost it,” he said. Moments later, a bachelor herd of kudu, noses pointing in the same direction, indicated otherwise.

About 70 yards away, a mid-sized leopard charged through the bushes like an over-grown house cat. Chasing a rodent, Banda guessed. For 15 glorious seconds, I watched it stalk and pounce in plain sight, as dreamy as a hologram. It was our first Big Five sighting, and it left me wanting more.

A passionate birder, Banda guided our attention to the sky often. “Look, a pair of white-backed vultures, lifted by the late morning thermals, scouting for prey.” Then he’d deftly switch to the ground, “Four-toed tracks.” An elephant shrew’s signature scribbled on the sand. “Second Little Five sighting,” I jotted in my notebook.

One late afternoon, our eyes were peeled toward the sinking sun, a white-hot fire ball slathered in a cadmium orange haze, when someone noticed silhouettes. “Buffalo!” The herd panicked and stampeded, kicking up a sepia-tinged dust storm. Their symbiotic weaver buddies fluttered over them. A majestic Big sighting, with a Little bonus point.

A couple of hours into our fourth morning walk, Banda abruptly stopped and nodded toward the open field ahead. “Walk quietly,” he whispered. “I may have spotted a lion log or a lion.”

Oftentimes a fallen branch resembles a wild animal in the bush, but Banda’s keen eyes were not mistaken. We lifted our binoculars. Two lion couples were frolicking. One pair fled into the woods. The other two mated, then rested beneath a tree. Lying prone, chin to the ground, tail swooping in broad mindful strokes, the huge alpha male eyed us intently.

Lions can’t distinguish people in a safari vehicle, but they can discern individuals on foot. I wondered if the lavishly maned cat was choosing which one of us to pounce on—an act that would have taken mere seconds. After a while, he relaxed. So did we, and we walked quietly on.

With three Big Fives sighted and rhinos out of scope, only the elephant was left. Truthfully, we had seen many from afar. With my confidence building, though, I was waiting for a more personal encounter.

On our fourth afternoon, with temperatures above 90 degrees and climbing, we sauntered, downwind, past a breeding herd of tuskless females. Unaware of our presence, the tranquil family browsed serenely on the branches of some thorny acacias.

The absence of tusks, Banda explained later, is a genetic predisposition occurring primarily in female elephants that leaves them vulnerable. Some scientists theorize it may be an evolutionary reaction from poaching. Tuskless elephants are known to behave aggressively to compensate for their disadvantage.

Unaware of all this, I calmly walked by the herd, curious why Banda, visibly concerned, kept turning back to check on the elephants.

The winds had changed. The elephants were picking up our scent. We had just passed a massive red mahogany when Banda yelled, “Run!” He pointed to a large tree about sixty yards ahead for cover. I looked behind to see the matriarch, ears flared, crazy mad, charging toward us with her herd.

Panic-stricken, we snapped into sprinter mode. Terror shot up my spine.

Seconds later, Banda shouted, “Stop!” Sakara and Phiri had calmed the matriarch and her herd with tai chi-like arm movements and firm exhortations. Gasping for breath, we looked back to see the herd retreat.

Sipping champagne on the sandy banks of the Mupamadzi on our final evening, we replayed our favorite memories. Walking, we agreed, felt less like observing and more like engaging with the bush and its wildlife.

For more info about the safari, see SwissAfrican.com