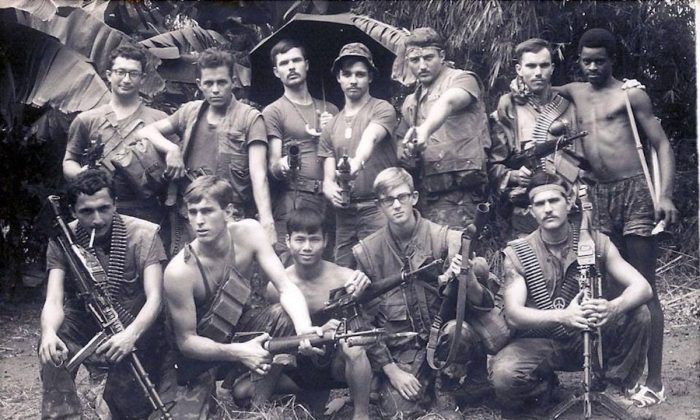 The Vietnam War continues to be a highly debated topic to this day, and was a period of time that left an indelible mark on American history. Many of us have heard about the atrocities that took place during the war, but few of us have heard of the acts of kindness and unlikely relationships that were formed. One former Marine recounts his time in Vietnam, and the tragic fate of the village he and his unit fought to protect.

Jack Cunningham is 68 years old, and lives in Sussex County, New Jersey. Ever since he was 5 years old, he knew he wanted to be a United States Marine. He graduated from high school, and enlisted in the Marine Corps a month later. In September 1969, the 18-year-old was off to boot camp.

Cunningham was “volunteered” to become part of the Combined Action Program also known as CAP. Initially, CAP was an all volunteer unit, but because it was so dangerous the Marine Corps started assigning Marines to the program. He and his unit consisted of approximately eight men and a Navy corpsman, and they embedded in a village in Vietnam called Duc Duc in the spring of 1970.

After two weeks of training, learning some Vietnamese, and some of the country’s history in Da Nang, he arrived at Duc Duc. The unit’s responsibilities included helping the residents build wells, providing medicine, going on patrols twice a day, and generally protecting the village.

At night they would set up an ambush in case the North Vietnamese Army or Viet Cong attacked, and they never stayed in the same spot in the village. The enemy would often fire aimlessly into the village in an effort to get the unit to return fire, and give away their position. Just three weeks into the mission, the sergeant of Cunningham’s unit was wounded by a grenade, and a lance corporal had to take over for two weeks.

When Cunningham arrived at Duc Duc, he was understandably scared. There were no bunkers, no barbed wire, and the nearest Marine base was two miles away. However, after a little time he adapted and became more and more comfortable in the village. He would walk to the market place wearing flip flops with a rifle slung over his shoulder looking for bananas.

Many of the villagers would also supply Cunningham’s unit with intelligence about the North Vietnamese Army and the Viet Cong. On the other hand, some members of the militia they were with in the village were moles who fed information to the enemy.

Sometimes there were as few as four men in his unit for as long as a week before they got reinforcements, and they often received information that the North Vietnamese Army or the Viet Cong was on the way to wipe them out. To make matters more dangerous, there was a large enemy contingent just across the river from the village.

“The fear of doom is always with you, but you still had to function on a very high level,” Cunningham explained.

On one of their patrols through this stronghold, Cunningham’s unit uncovered information about an imminent attack on the Marine base two miles away.

The plan was to go through Duc Duc, surround the base, and execute a siege. There were supposed to be a couple of thousand Viet Cong involved in the attack, and Cunningham’s unit was ordered to stay in the village, set up an ambush, and inform the base to give them a heads up that the enemy was coming. Instead, the contingent attacked their village directly, tragically killing approximately 15 residents in the village.

During another patrol, the base sent two tanks and 150 infantrymen to join the the CAP Marines. They had to walk on the tread marks to avoid booby traps, and one of the infantryman was tragically wounded after straying from the treads and stepping on a booby trap.

Then the unit saw people hurry into a tunnel. They threw a couple of concussion grenades into the tunnel, and pulled out three Viet Cong. What they found was unsettling: boxes of medical equipment, American currency, and other supplies that had been donated by a student group at the University of California-Berkley.

“In all honesty, you’ve just seen a guy lose his legs. You wanted to hurt somebody,” Cunningham recalled feeling.

Cunningham himself was wounded multiple times by shrapnel during his time in Duc Duc. In one instance, a rocket propelled grenade exploded next to him tossing him through the air and peppering him with shrapnel in the head, chest, stomach, and legs. Another time, his left hand was wounded by an explosion, leaving shrapnel in his hand. If he puts his hand up to the light, he can still see it.

Cunningham experienced another close call on a patrol on one of the hottest days of the year.

Cunningham and four men in his unit had found two enemy positions, and he and a friend were in charge of demolishing them. All of a sudden, his unit started taking fire and they were pinned down. Another CAP unit a couple miles away tried to come to their aid, but became pinned down themselves. They called in mortar fire, almost blowing themselves up.

Eventually, the other CAP unit arrived to help. They were returning back to Duc Duc, and three of the Marines left their weapons with Cunningham to retrieve some water after being in the hot sun for hours during a firefight. He stayed with their weapons, and waited for them to return.

As they were coming back they were ambushed. Cunningham set up on the machine gun and began shooting. He started to draw fire to himself as his comrades crawled back toward him. Bullets zipped past his head, but he continued to fire.

“In all honest truth you’re not being a hero. You’re not thinking anything other than the fact that you have to save your friends,” Cunningham explained.

The three men were eventually able to crawl back to Cunningham one by one, and they made it back to the village without being wounded. However, his unit wouldn’t always be so lucky. One day, Cunningham was in the village while his friend Robert Pierce was on patrol on two grassy knolls known for booby traps. In fact, Cunningham had stepped on one. Fortunately, it was a dud.

Usually, Pierce would get out of patrols as he only had less than a week left on his deployment. However, one night Cunningham had a dream that two Marines were going to die on one of these patrols on these grassy knolls. Pierce woke him up, and Cunningham asked if he would take his morning patrol.

“From that day on, I thought I killed him,” Cunningham said. “I would have rather have blown up myself than switch duties.”

Eventually, Cunningham and his unit had to leave Duc Duc on Aug. 11, 1970 as American forces were beginning to withdraw from Vietnam. He was happy to return home, but he felt like he had abandoned his unit and the village he had been protecting. It would also be decades until Cunningham forgave himself for Pierce’s death.

Tragically, the North Vietnamese Army and the Viet Cong massacred the village on March 29, 30, and 31, 1971 to punish the residents that had lived with and helped Cunningham’s unit. Over 300 men, women, and children were killed, wounded, or reported missing, and the entire village was burned to the ground.

When Cunningham returned, he and his fellow veterans could not admit they were Vietnam veterans because of the mistreatment others had been suffering when they got back. Many veterans were spit on, had vegetables thrown at them, and were called baby killers.

His hometown of Rosedale, Queens had built a Vietnam veteran memorial. Unconscionably, while he was serving in Vietnam, the memorial had been covered in black tar on two separate occasions.

Cunningham has dedicated much of his life to making sure veterans get the respect they’ve earned when they return home from war. He helped organize a welcome home parade in Sussex County, New Jersey for soldiers returning home from the first Gulf War.

Cunningham has also strived to make sure veterans get honored from past wars too. For instance, in Pearl Harbor, the parks department wanted to take down a World War II memorial dedicated to the Marines and Navy sailors who served in that war. Cunningham raised the issue on the internet, and within a day the Department of the Interior was receiving thousands of angry phone calls. The memorial remains intact to this day.

“We weren’t village burners and we weren’t baby killers. Everybody did their job,” Cunningham said.