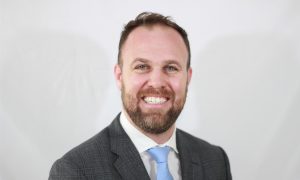 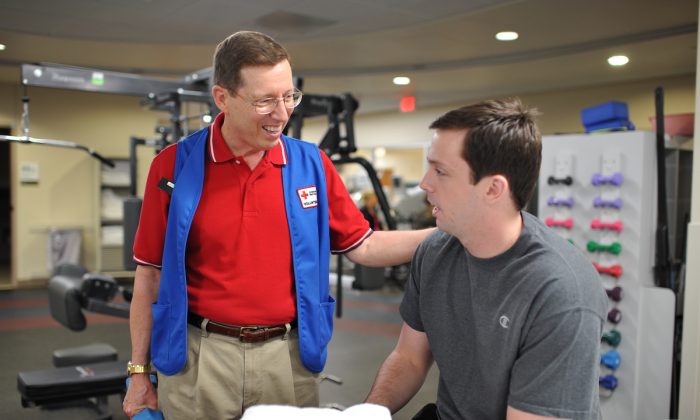 Stephen Peth (L) working with an amputee at the Military Advanced Training Center. (Courtesy of the American Red Cross)
People

A Vietnam Veteran Continues to Serve

Many men and women feel an obligation to serve their country in the armed forces, and many make serious sacrifices to protect the nation. This Vietnam veteran was wounded, but after his time in the military he still felt a need to continue to serve.

Stephen Peth of Nokesville, Virginia is a 72-year-old Vietnam War veteran. He was a helicopter rescue pilot during the conflict, and his unit was known by the call sign DUSTOFF, which was considered one of the more dangerous jobs in the United Stated Army.

His job was to land in combat zones, and retrieve the wounded to take them to the hospital as quickly as possible. During his first tour from 1968 to 1969, the then 23-year-old was caught in a dangerous situation.

During his first tour, he and his copilot were on their way to pick up wounded soldiers in a hot landing zone. He was flying in fast, and all of a sudden his helicopter was hit 39 times. He aborted the landing and started to climb, notifying his copilot that he had been hit. The copilot had been hit too.

Peth reached down with his left hand, picked up his right arm, and could see daylight coming through it. The bullet had taken out about an inch of his ulna bone, which had become lodged in his copilot’s shoulder.

Once they landed, Peth realized he was limping. Another bullet had gone through his boot. He was treated in Vietnam, and then back in the United States. Despite being wounded, Peth returned to Vietnam for a second tour in 1972 in a different capacity.

Peth returned to the United Stated in January 1973, and he would ultimately end up serving in the United States Army for 26 years. He had earned a Purple Heart, the Silver Star Medal, and two Distinguished Flying Crosses throughout his career. After Peth retired in 1992, he worked as a consultant and then for Raytheon in their business development division. He would eventually retire as vice president of the firm’s air and missile defense programs in 2004.

Despite having served his country in several ways, he still felt compelled to give back. Peth had been a patient at Walter Reed National Military Medical Center, and was seeing young men and women who had been wounded in Iraq and Afghanistan returning to the United States on television. That’s when he began volunteering with Red Cross at Walter Reed in 2006.

“The feeling I had was pretty simple. As a Vietnam veteran it was like, let’s treat these guys right. Let’s not treat them the way we were treated,” Peth told The Epoch Times.

Peth began in a transplant ward before he began working with amputees. He assists the physical therapists by changing sheets, getting equipment, cleaning equipment, helping count repetitions of exercises, offering water, and anything else he can do to help. If there’s an opportunity where he’s not interfering with a veteran’s treatment he’ll ask them about their service and how they were wounded.

Peth has had many experiences with amputees, and despite the spectrum of personalities, there seems to be a general mindset among the veterans he works with.

Peth found that many patients have a great sense of humor. A patient who has lost one leg may get into a conversation with someone who is missing multiple limbs, and the multi-amputee will accuse the veteran with only one amputation as just having a “paper cut.”

Peth also had a memorable experience working with a veteran named Brendan Marrocco, who was the first United States Iraq or Afghanistan veteran to lose all four limbs and survive.

The two bonded over their love of cars, and after seeing Marrocco on “60 Minutes,” Peth asked how long he would have to wait for two arm transplants. Marrocco jovially replied that Peth’s arms looked like a pretty good fit. In December 2012, Marrocco received a bilateral arm transplant, making him only one of seven to have successfully undergone the procedure.

Peth also developed relationship with another patient who was a race car driver. Peth has a sports car and is part of club that had a Wounded Warrior rally. Peth asked him he wanted to be his navigator, and the two had a wonderful bonding experience. The most rewarding part of Peth’s work is that he feels that he still has the ability to give back despite being retired.

“When you’re an old guy and you’re no longer getting a paycheck and yet you can still do something that people value, that really makes me happy,” Peth said.

March is Red Cross Month, and you don’t have to be a veteran to help. Volunteers can donate blood, learn a life-saving skill, or make a monetary donation.