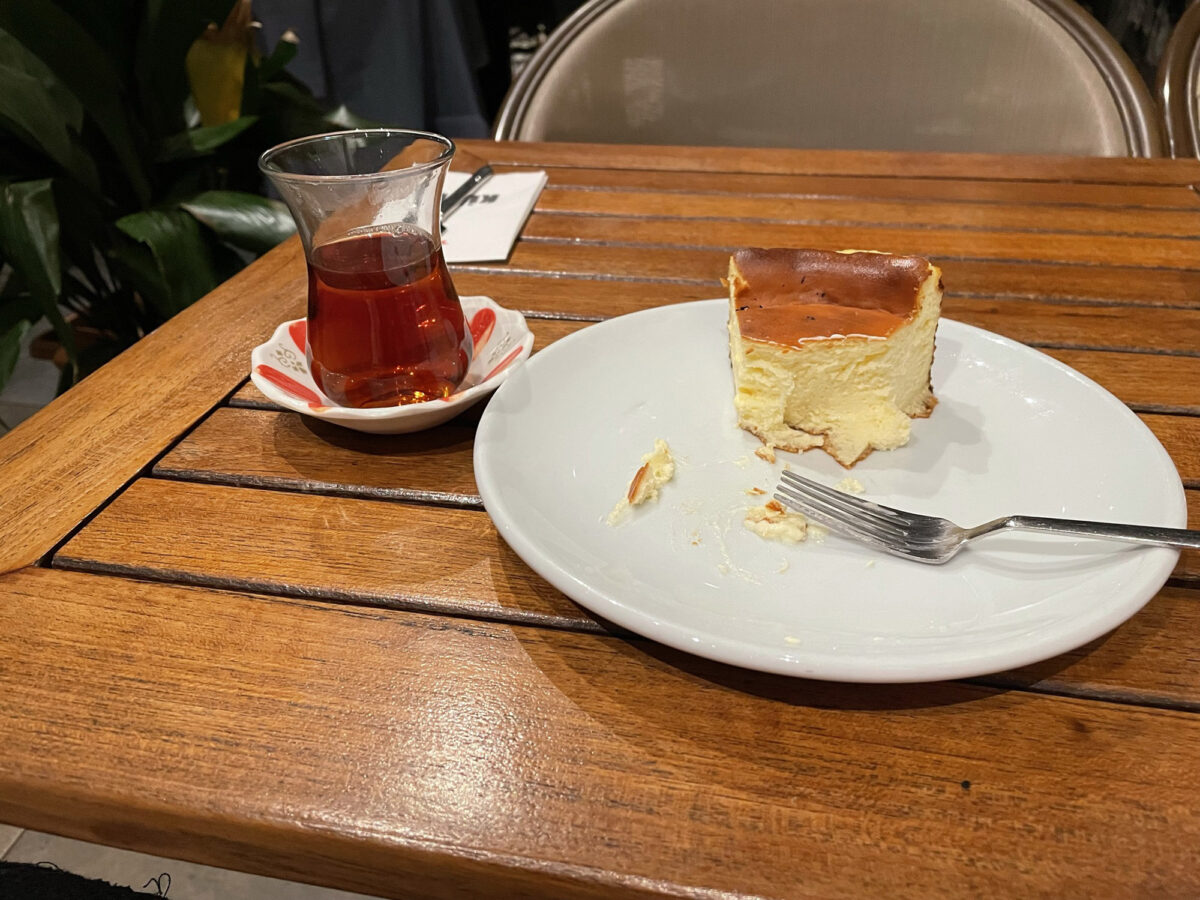 A Vegetarian Journey Through Turkish Cuisine in Meat-Centric Istanbul

By Alicia Eler
From Star Tribune

Every time I’ve gone to Istanbul to visit family, I stuffed my face with spicy kofte kebab and other meaty dishes. One of my fondest food memories in Turkey happened when I was 11 and we were driving through the countryside, en route to my grandfather’s old flour factory with my entire extended family. We stopped to eat at a roadside restaurant where they … killed a chicken and served it to us.

I’ve since been told I have “vegetarian vibes”—am I just that crunchy?—and I’ve certainly tried and failed at being vegan. But during a recent trip back to Istanbul, I discovered a new trend: vegetarian versions of all my favorite Turkish meals.

Veg on the European Side

My food adventure began as soon as I arrived. I dropped my stuff at an Airbnb in Cihangir, a trendy neighborhood on the European Side, the western half of this transcontinental city. An orange and white cat patrolled the street and stood watch atop a yellow taxi. I meandered to Urban Cafe, a busy restaurant with tables set up in the pedestrian street, and spotted my companion Elif inside. I was famished after my 10-hour Turkish Airlines flight from Chicago.

Elif ordered me a vegetarian kofte, with a creamy chickpea mixture replacing the meat, and a side of thick, crispy fries. While I was devouring it, my baba (“dad” in Turkish) called. I told him I’d made it safely, and he and Elif agreed that they were happy I was in Istanbul. After the meal, I ordered my first cay of the trip—Turkish tea that comes in a slender, clear glass.

The next morning, I navigated a few more narrow streets until I spotted the Ottoman-era Kilic Ali Pasha Mosque. From there, I walked up the busy Meclis-i Mebusan street to Setup, just above the main road that runs along the Bosphorus Strait. The patio area is covered in red tiles and servers wear slick black shirts.

For lunch with my artist friend Sena Basoz, I ordered the simit kahvaltı (or simit breakfast; 75 lira or about $4), which came with one perfectly sliced hard-boiled egg, tomatoes, sliced avocado, black olives, grilled olives, a strong and creamy ezine cheese, slices of simit (the to-die-for sesame seed-covered Turkish bagel), and cay.

“I remember you from last time,” the waiter said to me in Turkish. “You came here.”

“And we sat at the same table,” I said, digging into the avocado. It had been 2 1/2 years since I was last in Istanbul. The waiter dropped two small plates of gingerbread cookies on the table. Merry Christmas, Istanbul-style.

Vegan on the Asian Side

I caught the ferry boat across the Bosphorus to the Asian Side of Istanbul. For dinner at Cinili Tas Firin Kadikoy, Elif and I sat on small wooden tables on the patio and devoured vegan lahmacun (a usually meaty “Turkish pizza”) and vegan Kusbasili pide, a flatbread normally covered in meat. This time, it had chopped fake meat, red and green peppers, vegan rice yogurt, and pepper paste.

“Do you want an ayran?” Elif asked me, referring to the salty yogurt drink that I loved. “Don’t get the one that comes in an open container—I don’t trust it.”

After dinner we dashed over to Antepli Beraat, where I ordered my new favorite Turkish dessert: soguk (or cold) baklava. Even my friends in Istanbul had not heard of it, which made me feel like a trendsetter. The cold version of the pastry is filled with ground pistachios, baklava dough leaves, and sugar, but with an added bottom layer of milk and a cold freshness.

The next day I swung by Kuff Yeldegirmeni, where Elif works as a barista/manager. Before she started her shift we devoured the classic Turkish omelet-like peynirli menemen (with cheese) and sade bisi, which is like a puffy, plain doughnut, with a dip made of tahini and molasses.

“You like all the super Turkish foods, Kismet,” Elif said to me in Turkish, using my middle name, which roughly translates to “the good kind of fate.” I shrugged playfully and winked at her. I’m half-Turkish, after all.

That evening we went hardcore vegan, stopping by Rulo Lezzetler, a cheap storefront spot with an awesome buffet and zero meat anywhere. Elif ordered mucver balls (zucchini and veggie mix) and falafel. I tried the “vegan ayran,” which seemed paradoxical because ayran is normally yogurt-based. It tasted like a watery cacik, a yogurt-and-cucumber side dish.

The next day, Elif and I headed back to the European Side to track down the building where my baba lived when he was a kid before immigrating to the United States. The beige, four-story building in the swank Nisantasi neighborhood is now a bank, but I managed to get to the fourth floor and peer out the silver windows, imagining what he might have seen.

Elif and I strolled down the street to find a sweet treat, and ended up at Saray Muhallebicisi, where she ordered firin sutlac, a small bowl of classic Turkish rice pudding with the top burnt. I got kazandibi, otherwise known as “Turkish burned milk pudding,” shaped into a gooey roll of sweetness.

We took a taxi to Sis & Bros Café & Sarkuteri to meet up with my artist friend, Sevil Tunaboylu. As we drank cay and waited for food, a friendly orange cat jumped onto my lap. “He’s never like that with the customers,” one of the employees said to us in Turkish.

Sevil dug into a sumptuous roast beef sandwich. I ordered a vegetarian version that ended up being soggy and small, making me wonder if I’d made the right choice to go veg after all. But for now, I was committed to exploring the many meatless possibilities that Istanbul presented, one meal at a time.